Welcome back everyone.  Today happens to be a dog show day and we all know what that means don’t we !?!  Yep, plenty of time just waiting around for the next runs which translates to a perfect time to bust out another post.  Keeping with the non-bird theme let’s go with a show and tell entry.  It has  been awhile since we have had one of these (at least that I can remember) to the point I kinda feel like a slacker – although all free time has been invested in finishing up project Aaaauuuurrrnnnnoooollld.  The topic today is an addition we made to our photography business.  Linda is starting to get a lot of attention with her dog photography and even has a major dog show event coming up in a month or so.  She had asked me for a better way to display our wares.  Of course this was met with procrastination until the day before one of her shows last week.  Guilt stricken I headed down my favorite PVC aisle and planned something out. 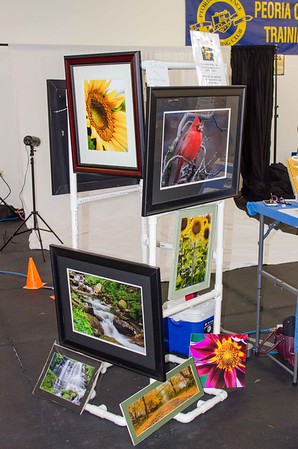 Key design points was it could not fall over and had to handle a variety of sizes – particular the large 13x19s down to the more standard 8×10 framed offerings.  As per all my PVC projects a (very) rough concept is sketched out and the rest is designed either in the store or during the build process.  Concerned about the stability element a general collection of 1″ connectors were purchased and 10 5′ sections of pipe – usually I’d buy the larger size but did not want to bother tying them down in the truck.  They were also the same price whether cut or not so advantage anyway.

Hit the jump to read how this frame was put together!

First task was to create the base.  Primary principle of things not falling down is to have the base extend out beyond the perimeter of the sides.  First thought was to just make L’s at each of the four corners – simple, cheap.  That did leave the possibility of someone catching their foot on the most external leg of the L causing them to either spin the unit around or worse stumble.  It would be better if it was closed and symmetrical.  To start I laid out the required four corners with tri-connectors.  The front sides would be directly out from there so laid out 90 elbows to get distance.  That just left two more 90’s to get the base side turned back.  You will notice there is a T in the front edge.  There were two reasons for that of which only one was used.  Thinking it might have some movement across the expanses, figured it would make it more rigid by putting pipes through the middle with a cross connector in the middle.  If nothing else it would add some weight.  The frame ended up quite stable so left that out for now.  The other reason is connectors add a thickness to the construction.  Adding a connector in the middle allowed it to sit flat a the endpoints and the midpoints for an overall solid structure – that was a major takeaway from all the past Posey work (link here). 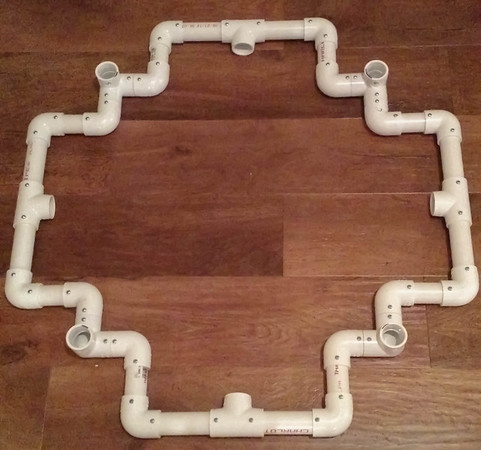 You will immediately noticed I fixed the connectors to the pipes with screws – self drilling machine screws.  If I am not sure of the final design this is the method used for locking in the structure.  The screw joints are as solid as the cement but allows for tweaking later if something doesn’t work out right.  Note, the self drilling screws were another learn from the Posey efforts.  They drill right through the connector and then take a few seconds to get through the pipe which basically melts the pipe and fuses it to the screw – perfect.  Oh, the other feature I opted to hold off on was filling the base with sand and sealing it with Stuff-It inside  the tri-connector openings.  May need to add this, but for now it seems very stable without it.

Next up was the top.  During the build phase another design principle comes to the forefront – transportability.  That always equates to the ability to break it down and put it back together easily.  From the top perspective it meant a solid unit that would hold the sides together that could be taken off in transport and quickly aligned at the show.  Nothing too creative here – just another set of tri-connectors that matched the bottom frame.  I did add a second bar on two of the sides which made it more solid.  It also provided a nice area to put our company name/logo in

Here is what it looked like from the side.  I’ll get to the hooks a little later.

.. and of course from underneath.  Just make sure the T connector points at the bottom match with the openings in the base. 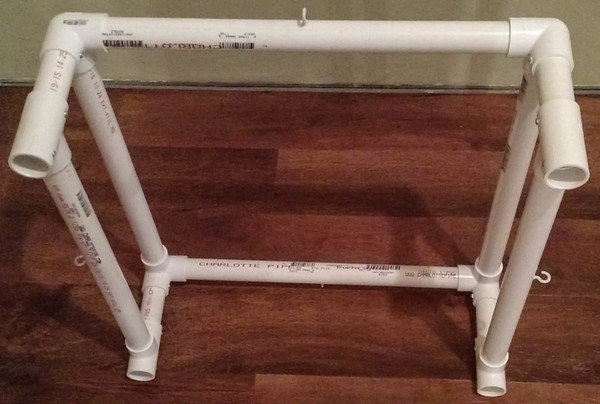 Next up were the sides.  I wasn’t exactly sure of the dimensions yet, but figure the larger dimensioned frames could extend past the edges.  That meant the standard sizes had to fit in between them assuming the large frames would be displayed on opposite sides.  It just occurred to me I forgot to point this out when creating the frame and top – sorry about that.  The requirement to have one side be long enough to fit a framed 8×10 was the element that set the distance for each of the tri-connectors on the base.  Any design requirements that can be delayed are generally delayed to buy myself some time to think about it.  The cross points could be figured out later – the first priority is getting height right.  Initially I just put the frame together with the full 5′ pipes as a starting point.  From a portability perspective it was pretty obvious that only two sides really needed to be constructed.  The other two sides would just need single crossbars if the plan came together as expected.  Remember that extra bar put on the top.  The reason for that was really to hold the top crossbar on the smaller frame side.  I could have left this on the side construction instead, but the extra stability in the top ended up working nicely.  Linda figured she would only display 4 large frames at a time – they are pretty big to carry around to shows so more than that would be unwanted work.  That translated to two per side.  I figured out how far down to place the second picture on a side (using real frames) and marked that spot on the straight poles.  Each was then cut and 4 T connectors added pointing at each other.  That gave me the supports to hang the large frames.  Next up were the two smaller frame sides which would be individual constructions.

Linda was guessing three smaller frames per side.  The top cross was already on the top piece so all that was needed were two more crossbars to hang the other two pictures from.  Once again using an actual frame sample I spaced it out appropriately and marked the cut points on the straight poles.  Each post was cut and again T connectors (this time 8) were added pointing at their mate but  90 degrees from the first connectors.  To connect them together, I measured the distance between the base tri-connectors and added about a half inch.  This was the length used for the cross bars for the small frame side (connects the 8 T connectors we just put on).  Why a half inch larger?  I like tension in my frames for a couple of reasons.  First off it adds to the rigidity of the frame – PVC under tension is stronger than if it was just sitting in a connector.  Secondly, it makes it easier to put together since it tends to stay where you put it rather than falling all over the place – words of wisdom from many years of using PVC for things it was not intended for.  This means you will have to bend the top and bottom of the straight poles a bit inward to get them to marry up with the base and top.

So, we now have two side constructions that look like this from the inside out.

and this from the outside in.

The crossbars for the large frame side are as simple as it gets – just due a final measurement with the sides in the base and put them in the original two T connectors you put on the sides – the top frame will keep those from going anywhere.

This is what it looks like all together from the small frame side.

And this is what it looks like turned 90 degrees to the large frame side.

This is when Linda had to come down and give final guidance on how tall she wanted it.  Each connector you put on obviously added height to the overall structure.  She wanted it shorter than the final outcome – if nothing else to make it easier to get the sides in the SUV.  No problems – all that needed to be done was lop off the bottom of the straight poles to set the desired height.

With that done all that was left was to add some hooks to hang the pictures from.  I placed them in the middle of each crossbar (you can see them in the pictures above), assuming there would be picture wire on the back of each one to hang them with.  After our test run an improvement became apparent.  To make the pictures a little more stable on the structure I will replace the single hook with two hooks about 3 inches apart.  This will keep the picture from wobbling on the single hanger.

The large frame side….

The small frame side — notice the nice area to put our logo in at the top and how the larger frames extend past their side dimension.

Oh, one more thing.  I did not want this falling on anyone.  To insure that, I drilled holes in each of the bottom tri-connectors to insert removable pins.  Linda had some problems getting all of these in at the show so I’ll go back and drill those holes a little larger for ease. 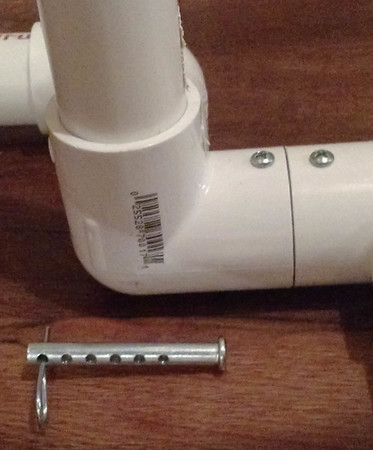 And there you have it.  A nice inexpensive frame that Linda can easily take to shows.  She ended up selling at least two framed pictures the first time it was used which I contribute 100% to the cool display hehehe!

Hope you enjoyed the latest PVC project.  We’ll paint or dye the frame before the next show.  I was rushed for time seeing how all this was done in about 5 hours the day before she needed it!

2 thoughts on “Operation Display It, See It, Sell It”