It has been a few days since I’ve been able to post on the wild side of Intrigued.  Before I get accused of slacking since retirement, I have been busy on the post front.  The Halloween Haunted Trail posts are finally getting the spotlight and those are a lot of work – one more part to go on that and that will finally be checked off my to-do list.  As you can tell from the image below, I decided that I needed a break from the haunting. 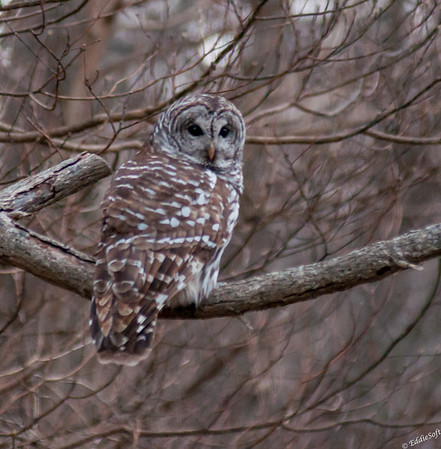 Hit the jump to learn something interesting about our feathered friend – hint, these images might still be wet.

END_OF_DOCUMENT_TOKEN_TO_BE_REPLACED

Howdy Owl.. I mean All. This was one of those Saturdays where I get up before the crack of dawn, down a lot of carbs and ions hoping to make it through another race. The fact I am around to type this means I passed the challenge. There will be more on that in an upcoming post, but it did leave me exhausted enough to plop myself down in front of the old computer and bang out another post. This post comes with a heavy heart (and not just due to the run) and one I’ve been repeatedly delaying for a long time now. Figured it was time to free myself from the burden of guilt.

This is my friend Hootie. It is a wonderful specimen of the Barred Owl.  This one decided to grace us by taking up residence in our local woods.

This is not the first time the Barred Owl has appeared on the pages of LifeIntrigued (link here and here). In fact, I am pretty sure the one featured in the second link is the exact same one you are looking at today.. just a little older (Not so sure about the first one – looks and mannerisms were pretty different). Truth be told, I actually thought this was a “Bard” Owl – named because of the wise old tales they used to say … wrong!

At first this one would only show up every once in awhile and usually hanging out on a farm fence pole or sitting off the road near the treeline. Just sitting there minding its own business surveying the kill zone. Birds of prey know they are cool and don’t need to go about flapping their wings and chirping like crazy to get attention. Nope, just an occasional hoot. Let me clarify that a bit based on some reading at AllAboutBirds and Wikipedia. Both those sites claim the Barred Owl’s hoot is a “Who cooks for you, who cooks for you all” (note, Wikipedia added the ‘all’ part of that line). Not sure I have ever made that association when experiencing the nightly calls (and we’ve heard them plenty of times). Will have to take note of that the next time we are out after dusk. Can’t say I have ever heard them that much during the day – normally early morning, sunset and later.

Hit the jump to see some more pictures of Hootie

END_OF_DOCUMENT_TOKEN_TO_BE_REPLACED

I have a lot of bird pictures I really like, but to be quite honest, the next couple are definitely in my group of favorites.  It is not so much the quality, lighting, pose etc. as much as it is the amount of things that fell into place in order to actually be able to take this shot.  First off, Linda and I were heading out one morning to check out the Peoria Zoo and thus had both our good cameras with us.   It was a fairly nice sunny day so we dropped the top on the convertible which allowed me to take in the scenery as we were passing our favorite park just down the street from us.  Out of the corner of my eye I noticed that a large object was sitting in the branches of a dead tree (in a yard across the road from the park).  I had Linda slow down allowing me to make out that it was this sitting in the tree:

The best I can tell, it is a Barred Owl which according to my guide can be active into midmorning.  We always hear these birds hooting at night, but rarely have we seen one out in the morning sun.   Unfortunately, I had to crop it a little tight to block out some unappealing background.  I prefer to give my birds some room to move in the frame, but technically he is facing backwards to me so he does have room to escape out the left side.  Although this was a pretty close encounter, Linda and I have had two other experiences.  One was at our old house while walking along a trail in the woods.  We startled a huge owl that literally dive bombed us before getting enough uplift under the slowly unfurling wings enabling it to lift into the sky.  That one made our hearts skip a beat, but the other one just about killed us.  We were heading home late one night in my wife’s Wrangler.  As we came down a hill, there was a large object in the road.  Although there are conflicting reports on what actually occurred next, the consensus is my description is the accurate one.  For some reason my wife either did not see the LARGE OWL in the middle of the road or had some owl angst from a childhood experience and thus decided not to hit the brakes (she claims she was preventing a rollover due to the top heavy Wrangler). The owl unfurled its wings and began the slow process of lifting into the air.  Let’s stress the word slow in relationship to the speed we were traveling.  The next thing I see is a full window of owl feathers making an ugly smack sound.  Since the Wrangler has a flat windshield, my guess is that owl is toast.  For my own since of tranquility, I chose not to look back and just assumed the plumage cushioned the blow allowing it to survive the horrific event.  I keep reminding her of this night every chance I get and threatened to paint a silhouette of an owl on her vehicles next to the hundreds of other wildlife she has run down in their prime.

Oh, the other lucky factor is the owl gave me just enough time to get one still shot before he assessed the situation and headed off.  I did get one pretty cool flight shot but lost him in the zoom lens as he turned into the woods.

Again, so many things had to come together to get these two pictures.  If I get a chance I might post another one of my favorite bird shots I submitted to the State Fair photography exhibit.  I am a little hesitant to post our best pictures on the web yet, but I am looking into some watermarking or labeling to give me a little more piece of mind.  I enjoying sharing, but I have been getting some stories from my fellow photographers that are concerning me.

Hoping to have more owls to share in the future!