This has definitely been a good month for production here at Intrigued.  Today’s post will double my minimum quota of 6 (including the non-wildlife ones on the mothership).  So far, retirement appears to be agreeing with me.  Unfortunately, the topic being covered today will probably get me into some very hot water with my lovely wife.  The real question is whether relationships are stronger with complete openness or whether the unknown is wedded bliss.  If nothing else, it will give a good indicator on whether Linda reads my musings as I’m sure I’ll know the EXACT moment she starts reading this.

In what may be a first in the history of Intrigued, leading with a shot of a restroom – a bad cell phone shot taken last month none the less. 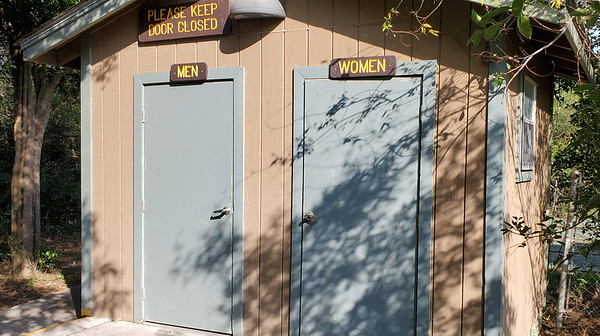 Okay, now for some background.  This particular restroom sits in the back part of Estero Llano Grande State Park in Weslaco, Texas.  Note to self, I really need to dedicate an entire post to this incredible birding site.  Estero is a very close second on my must visit sites to South Padre Bird Viewing and Nature Center (and now Alligator rescue) which currently reigns at top.  The nice thing about Estero is it has multiple habitats for a large variety of birds.  The pictured restroom was straight out from the parking lot in the now reclaimed mobile/RV area.  We happened to be back there to tin an extremely nice +1 that will certainly be featured in the coming months.  The previous year Linda had used another bathroom in that area and didn’t have good things to say about the experience.  I was actually elated to tell her this set was very nice and even recommended she use them should the need arise.

If you are still reading this, then safe to say you are not Linda and clearly curious as to why a restroom would be featured on a wildlife blog.  The answer lies in the top right of that cell phone picture – specifically in rafters behind the scraggly branches.  I grabbed another quick cell phone picture just in case it decided to fly away before I got The Beast brought to bear. 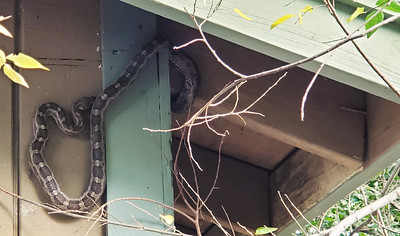 Likely would have completely missed this visitor had a nice couple not alerted me to its presence.  “Would you like to see a Snake?”  Knowing Linda had already returned to the RV, I promptly responded “Certainly!”  Who am I kidding, that would have been the exact response had Linda been standing next to me.  The only difference is our ears were spared a piercing scream and I my clothes were not ripped from my body.

The informative couple then started walking toward the featured restroom.  Upon realizing that the restrooms were not on the way, rather the DESTINATION all kinds of comical/horrifying (perspective determines the proper word there) scenarios started playing out in my head.  The ongoing mystery as to how fast you can run with your pants down would have been put to rest for sure. 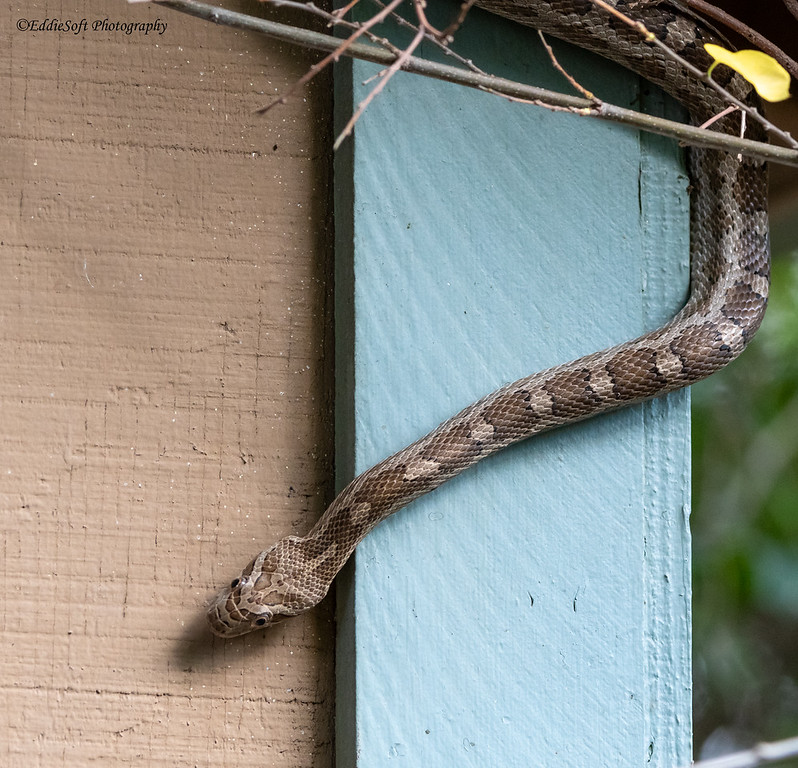 Only about 12 inches of the snake was exposed from the rafters when we got there.  I thanked the couple for alerting me and they continued on with their own exploration.  Took a bit to get a decent angle for the big glass.  Struggled to figure out how to capture the overall scene and yet bring enough detail to make it an interesting shot.  As in most of these cases opted for individual solutions. 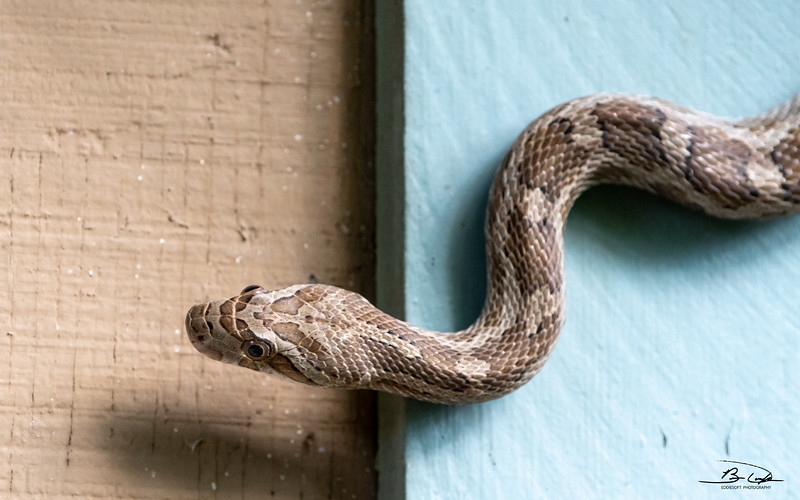 I am absolutely horrible at Snake identification and wanted to make sure I got enough detail in the markings to use when pouring over the reference material.  Note, my digital darkroom treatment brings more warmth to the images – in this particular case, the Snake had a greyer hue to it that what it seems from this series of shots. 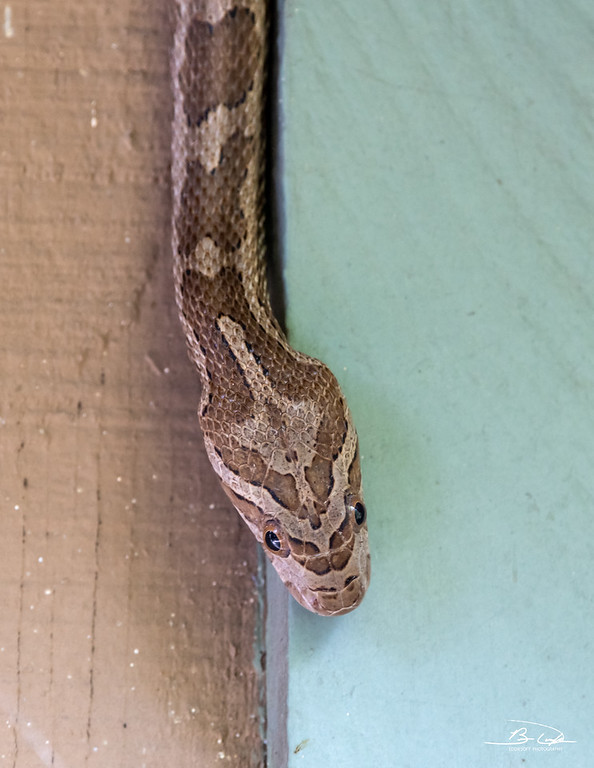 Let’s bring you in just a bit closer.  It did occur to me at this very minute that  there might actually be someone using the women’s restroom being surveilled by our forked tongue one.  Took a few steps to the side of the door just in case – didn’t want anyone blasting out of there and trampling me – I have firsthand experience on what a woman might due when confronted with such a creature. 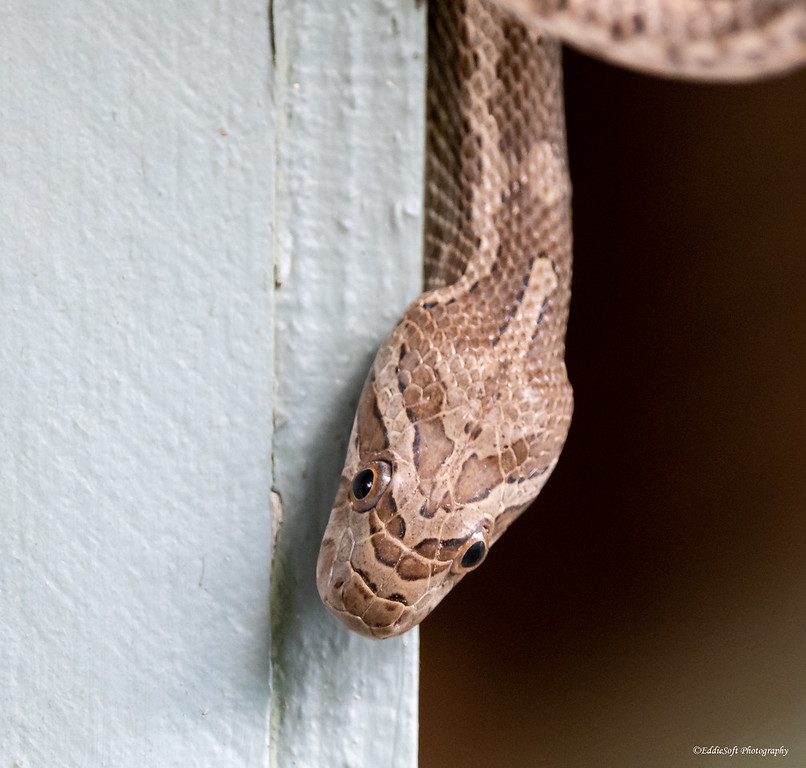 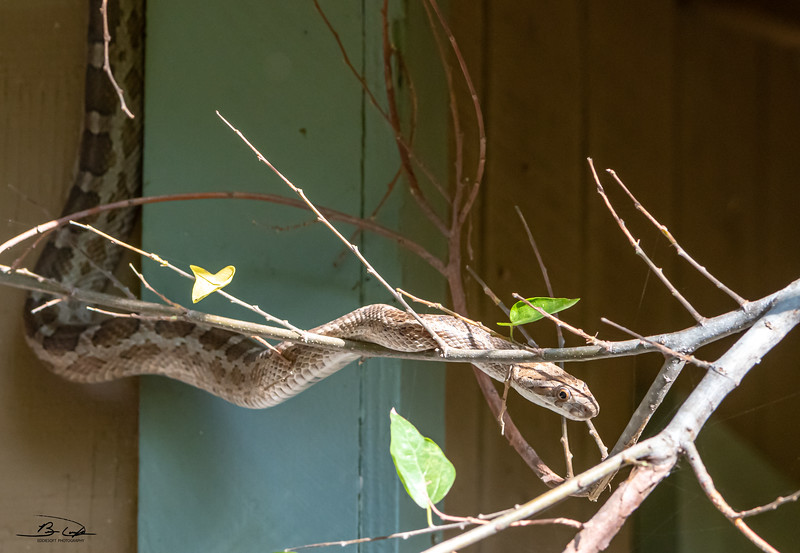 I kept waiting for the tail to drop down from the underside of the rafters, but it never did.  Nor could I tell it was getting any thinner.  Just a giant slinky with a head getting stretched longer and longer and longer.  Suspect there would have been an emergency vehicle involved if Linda was still in the area to address hyperventilation or complete exhaustion on her all out sprint back to the RV (see link here for a previous sprint to safety episode).  Never did end up seeing how long it really was due to a new sighting of my +1 bird that immediately grabbed my attention – birder before snaker. 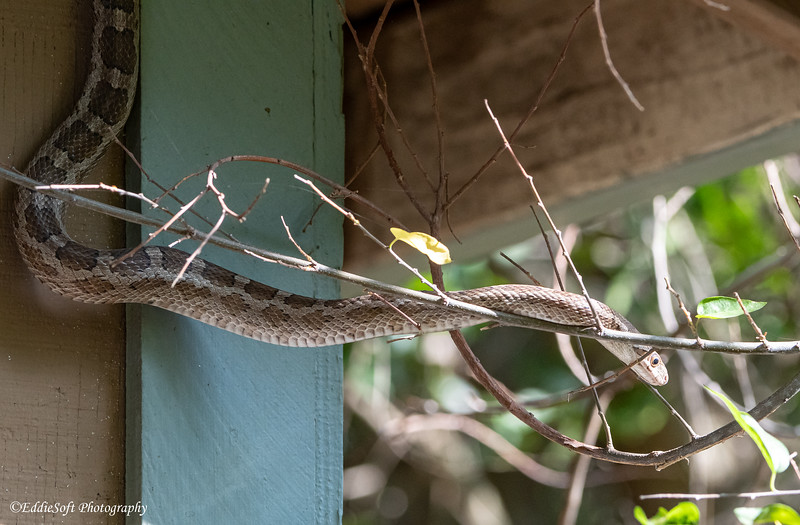 Wrapping this up, I was spared the hours and hours trying to figure out what this was.  A naturalist volunteer came over to see what captured my attention – either that or he was concerned I was taking pictures of the women’s bathroom hehehe.  Hopefully putting his mind to ease, he noticed my real target as he got closer.  Asked him if he happened to know his Snake species.  “That is a very nice looking Grey Rat Snake”.  I’ve seen my share of the Black Rat Snakes – now get to add a new family member encounter.  Big thanks to that individual for saving me hours trying to ID it.

Should probably clear up some vague references from above.  Linda is completely convinced Snakes have both feet and wings and they keep them concealed until the want to sneak attack an unsuspecting woman – thus the fly away comment.  This encounter will only perpetuate that falsehood, sigh!  In regards to losing my clothes earlier, we encountered a Snake while on a rather narrow trail likely out in Yellowstone.  Linda was behind me while I was carrying The Beast.  She spots at little 2 foot snake on the trail in front of us and goes bat-shit hysterical and what can only be explained as an irrational attempt to climb to safety using me as a human ladder.  clawing at my flesh and ripping my clothes in the process.   To this day on trail walks I fear being rendered naked by the mere sighting of a crooked stick.

Take it easy everyone.  If you do not hear from me in a while, figure Linda read this post and assume it didn’t go well for me!

2 thoughts on “Not Going to Go Well for Me”