Welcome to 2021 everyone!!  Sorry for the long delay on the posting thingy, but we are currently doing a little bit of exploring to start the new year off right.  Now a mere one month off from my official retirement date – need to live each day to its fullest.  Being out and about has limited my ability to get to the keyboard for my own blog and, unfortunately, waaaay behind on getting caught up with the output from all my blogger friends.

With the replenishment of the calendar, decided to start the year out with something completely different.  Honestly, this has been in the hopper for some time now.  Part of the confusion was deciding which blog to put it on.  Typically it would go on the mothership as it isn’t technically wild”life”, however you can’t deny there is a creature element to it.  Let’s just overlook the fact they happen to be in a perpetual stationary position.

Hit the jump to learn more about these evil deflecting creatures.

Say hello to my stoner friends.  Should probably give a bit of background on this.  If you are not familiar with the clue at the opening of this post, that is the flag of the Vanderbilt family that flies over the Biltmore Estates in Asheville, North Carolina – the home of George Washington Vanderbilt II.  Biltmore underwent construction from 1889 to 1895 with an official grand opening on Christmas Eve 1895.  He married in 1898 to Edith Dresser in Paris and brought her to this opulent mansion. 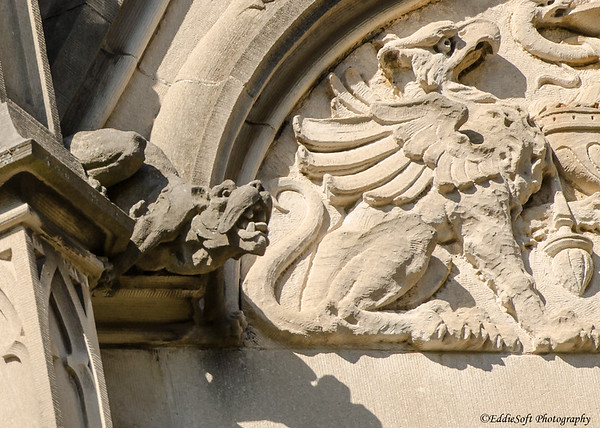 He named his estate Biltmore, a combination of a tribute to his heritage originating out of “De Bilt”, Netherlands with the Saxon word for rolling land, “moor”.  We have had the pleasure of visiting Biltmore multiple times now.  We did take the mansion tour both times, but not sure we would take the base tour again – it is self guided so the content was the same and has some restrictions on where you are allowed to go.  There is a higher ticket tour that has more of an architecture perspective that sounds very interesting and gives access to additional floors.  Before forking over that amount of dough, would definitely have to verify the tour includes details on all the statues that ordain the outside of the mansion.

The Beast has become an extension of my arm.  When I’m out exploring in the field, it is my constant companion.  You can never have enough reach when it comes to tiny bodies attached to wings and nothing like fresh air and an arm workout at the same time.  When I get a chance, I also like hauling that glass into the urban settings, especially places that have an architecture flair.  Although fellow photographers will give me weird glances when then see me inside with the big glass, that isn’t why I elected to lug it around – the real fun starts when the tour is over and I can roam the grounds.  I’ve always been intrigued by the odd and places like Biltmore are full of them.  Note, Vegas is another wonderful urban setting to use the zoom (link here).

I probably spent two hours along just walking the grounds trying to capture all of the intricate statues and gargoyles that are EVERYWHERE on that estate.  I am not sure there is a single niche that didn’t have something staring down at you.  Mostly forms of macabre that would assuredly give a child perpetual nightmares were they not beyond their typical viewing angles.  Fortunately, The Beast can bring those images front and center. 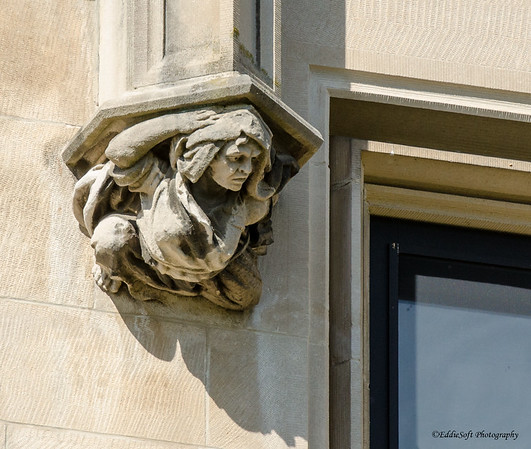 This particular post features the gargoyles and statues primarily on the main mansion.  There is a companion post coming in the future which focuses on the reliefs and all the statues scattered about on the grounds. 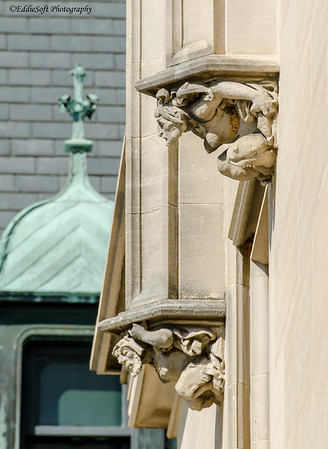 The ground statues are definitely more traditional.  The facade statues.. well, some of these defy description. 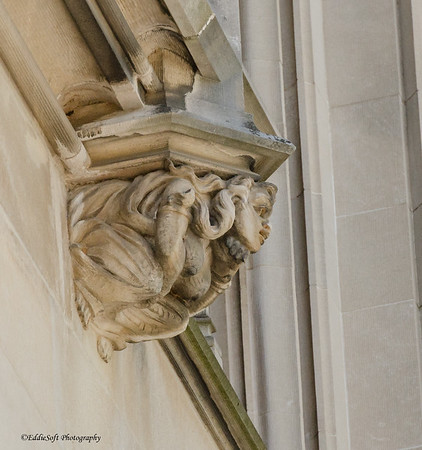 Admittedly, I learned something while doing a bit of research for this post.  I was familiar with the term grotesques and I always thought that was interchangeable with the term gargoyles.  Not sure where I came to associate those two terms, but clearly I was not aware of the nuances involved.  Based on some quick reads, it appears that grotesques are the superclass – as in gargoyles are a type of a grotesque. 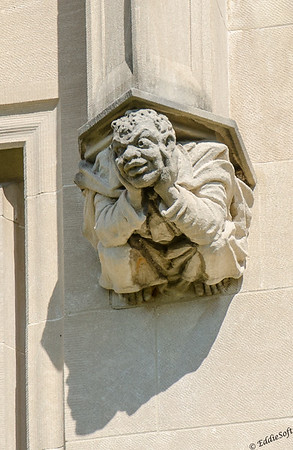 First an official definition.  According to Dictionary.com, a grotesque is “odd or unnatural in shape, appearance, or character; fantastically ugly or absurd; bizarre. fantastic in the shaping and combination of forms, as in decorative work combining incongruous human and animal figures with scrolls, foliage, etc.”  Biltmore took this definition to heart.

There seems to be some debate on the purpose of these architecture artifacts ranging from the more common purpose to ward off evil.  Obviously, the best way to fight evil is to use evil.  The other reasoning I read was related to churches.  The grotesques represented the evils that abound outside the church versus the goodness one would experience inside the walls. 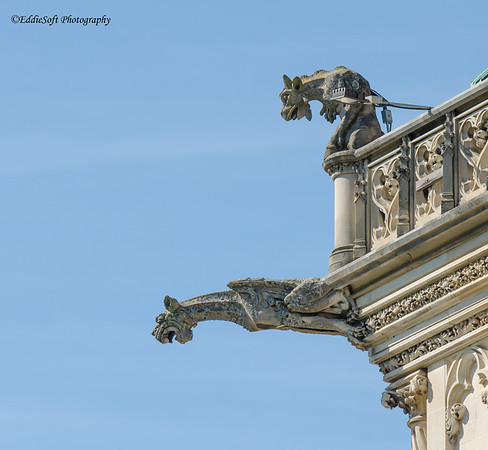 Okay, now to address this gargoyle issue.  As a subclass of grotesques, they carry the same task of warding off evil.  Oftentimes the form of choice is a winged demon.   The shot above shows that classic look. 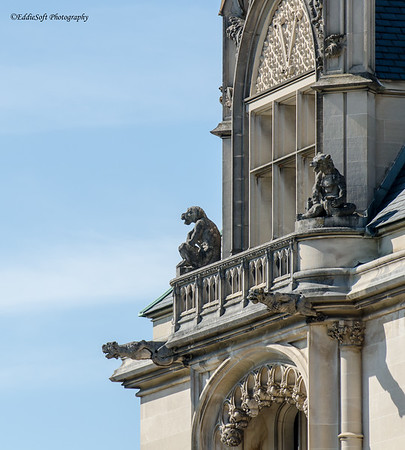 Now for the differentiating element.  Gargoyles serve an additional purpose, an architectural function that happens to dictate their placements on a building.  The backs of the gargoyles are typically channeled out and used to divert water off the roof or low spots.  To add flair, the water can be directed through the open mouths.  The best way to really deflect evil is to vomit on it. 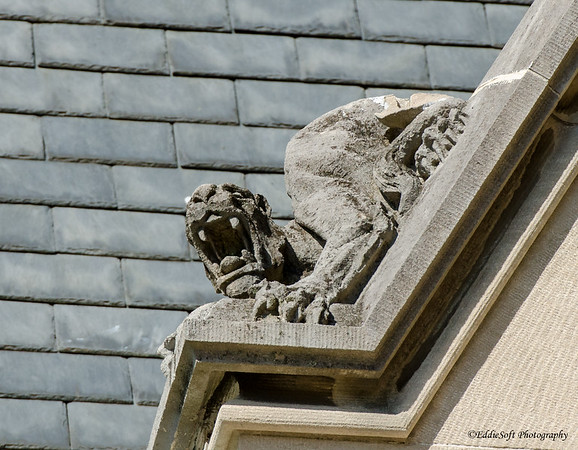 These gargoyles basically deflect out water to prevent it from running down the facades of the building – longer the gargoyle, the further out it would deflect the destructive water.  Would love to see one of these in action on a rainy day – I have visions of a full on waterfall crashing onto the grounds below – add some green or red dye on the roof and you have yourself one hell of a Halloween decoration. 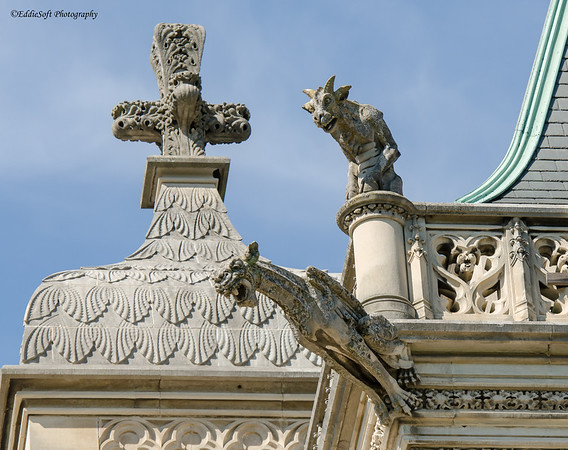 As you can tell, it was a perfect day back in October 2016 when these shots were taken.  A bit of a Catch-22 as I likely would not have willingly pointed The Beast straight up during rain for a statue – a bird, not that is a completely different story ha. 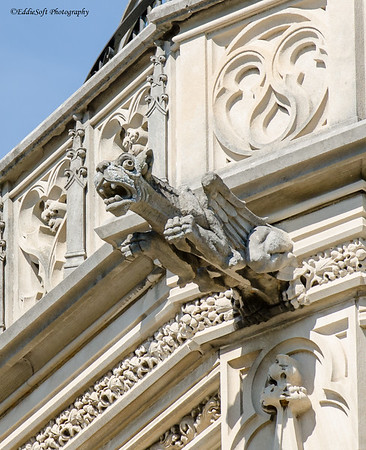 Next time we are at Biltmore I should check out their bookstore and see if they have anything that goes into detail on all the grotesques installed on the estate. 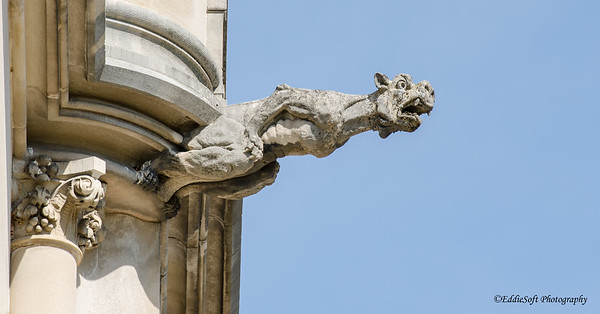 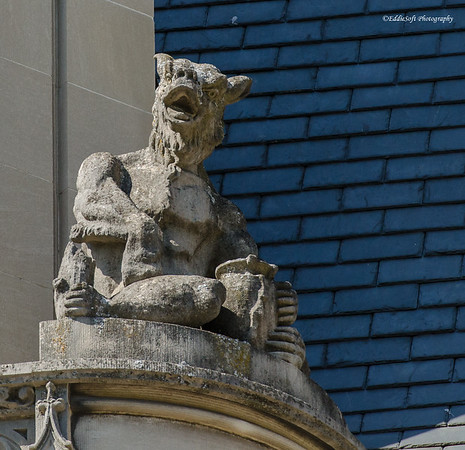 As a bit more background on the mansion, Mr. Vanderbilt hired Richard Hunt to design Biltmore.  Richard had already gained recognition from houses he had created for his relatives.  The house was based on a Chateauesque style found in France and England at the time. 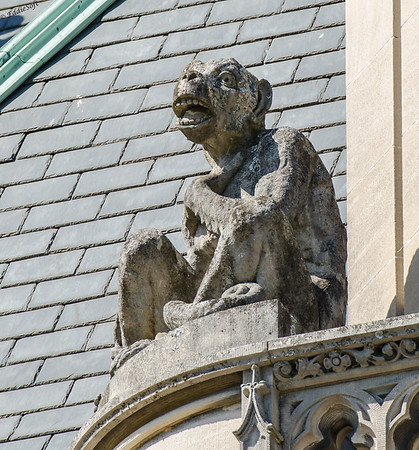 This style is heavily influenced from Gothic architecture complete with steep roofs, towers, spires and heavy facade ornamentation. 4 stories tall, this masterpiece is a stunning piece of work that proudly stands above one of the most beautiful grounds I’ve ever visited.  Every piece of landscape was meticulously planned to compliment the house complete with a statue filled flower garden to the left of the mansion. 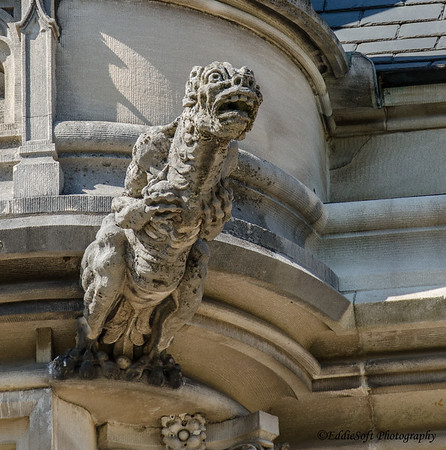 If you have that much wealth, you might as well flaunt it.   Based purely on what I read on Wikipedia (which I am always skeptical of), this Vanderbilt was basically hands-off from the family business and lived strictly on the inheritance.  Biltmore managed to take a serious chunk of that wealth. 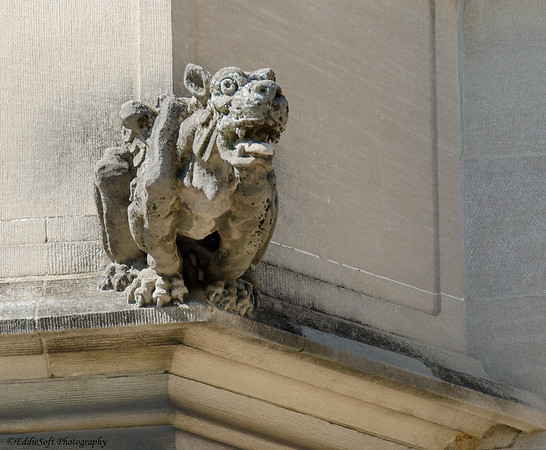 I tip my hat to the business geniuses behind the current management of Biltmore and commented on that every time I forked over the fees to explore the interior of the mansion.  Somehow they managed to convince the general public to give them money so they can maintain the estate built by one of the wealthiest families in America.  Maybe all these grotesques are really just hideous with laughter at all the paying fools who enter. 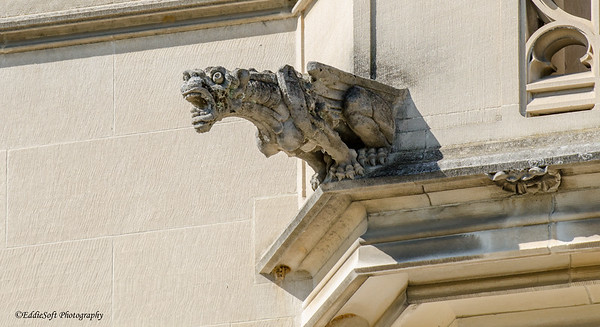 Regardless of the irony, we still enjoyed our time there.  Better memories for sure compared to last year.    Curious, I did check and you can still visit the place now with the usual Covid-19 precautions.  You always had to have a ticket to get inside and now I suspect they simply limit the number of tickets they sell per hour to give more spacing. 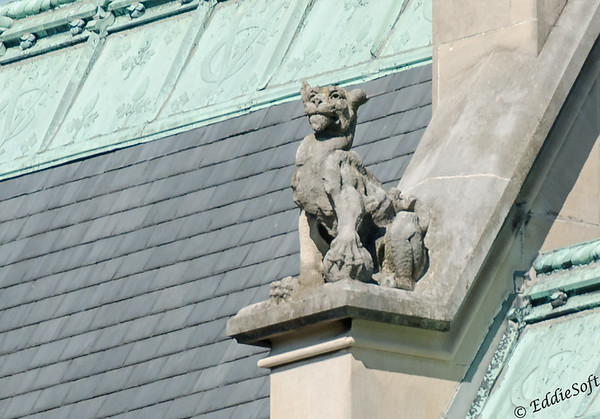 We have come to the end of the shots signifying it is time to wrap up the year’s first post.  I would be remiss if I didn’t mention that you should really visit the Biltmore winery after you are done exploring the estate.  Complete with free sampling and a wide variety of wines you are sure to find something to your liking.  I also got a really nice trail run in while I was there…prior to the wine tasting of course!

Take care everyone and hopefully these grotesques will scare that evil Covid right back to the hell it came from.