For the regulars to the blog, you know Linda and Raven finally get to compete in the agility ring this weekend.  We had to travel down to southern IL for them to get the chance to run.  Rules have been bouncing all over the place for these competitions.  IL is slowly loosening the restrictions on businesses and gatherings over 10 to 20 people, however, there is still a lack of clarity on the real requirements.  Our trip up to Chain O’ Lakes a few weeks back was actually to participate in an agility show that ended up being canceled by their police chief (never should have asked), yet this one is still on (probably didn’t ask).  Some shows require masks only while running the dog, others require masks only when not in the ring, some allow spectators, some allow only the dog owners and then there are those that only allow the handler of the dog running in the current jump height.  Ridiculously confusing from my opinion.  The competition down here requires masks except in the ring, no spectators in building and only the dogs and their owners in the jump height can be in the building.  That means I have to keep myself entertained in the RV.  Traveling 3 hours down to an event and not being able to see your kid participate would normally be frustrating, however, it appears Raven is a bit rusty and well, stunk it up today. 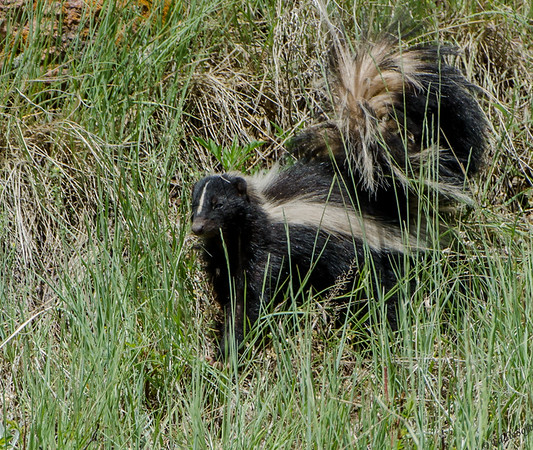 Hit the jump to read more about our striped friend.

Raven was adamant that it was mom’s fault and demanded to see the tapes.  Oh, correction from last post.  I mentioned that it was pure comedy watching Linda explain Covid to a headstrong Poodle – well, here to tell you, that doesn’t hold a comedy candle to the belly laughs when those two argue back in forth on who was to blame for pulling out the Poodle finger on the teeter totter. After listening to this all the way back to the campsite, decided there was a perfect post for the “who stunk more” argument I had to endure. 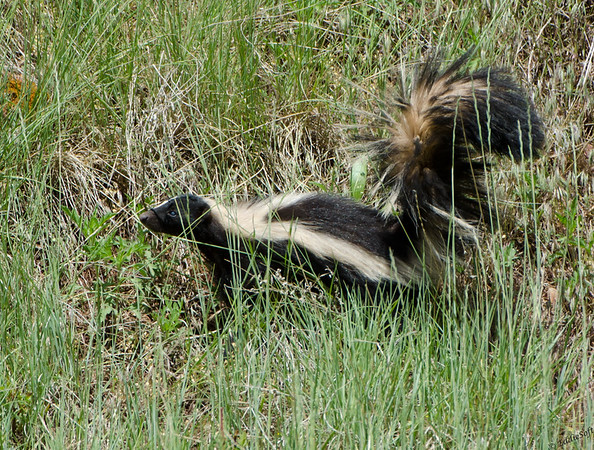 I believe this is a first for the blog – the white stripe of fear.  Living out in the country for a good part of my life, I have had the privilege …err. make that unfortunate experience of meeting multiple skunks in the wild.  First impression, our Illinois skunks are just plain adorable looking.   Most of them are relatively small – maybe reaching the size of a small Groundhog  – at least the ones I tend to encounter.  It isn’t like a lot of animals will risk being shot in the face with a stink bomb, so there shouldn’t be a huge struggle to survive outside the inherit desire to get to the other side of a country road when a car is coming (regardless of how close to the opposite side of the road they happen to be on).  Regardless of the reason, that was my reference point until Linda and I took a trip out to Denver, CO for the Teacup Agility Dog Nationals back in May 2014 (another reason this felt like a good post topic ha).  While out there, I made a quick run over to Red Rocks Amphitheatre for a little birding during the down time. 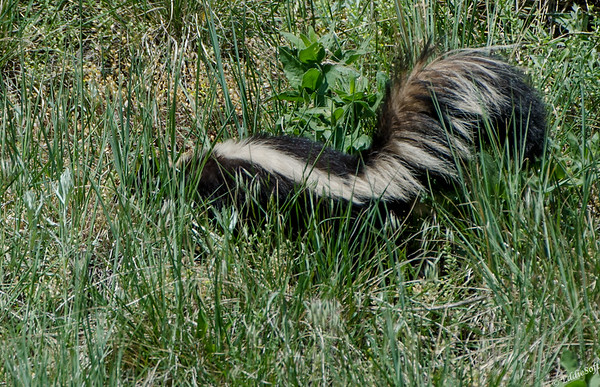 Decided to park the car in the theater (which is quite a ways into the park).  Grabbed the camera and headed over to the brush and weeds at the base of a steep hill on the far side of the lot.  As I was scanning the area for interesting birds, noticed that the weeds were simply parting towards the top of the hill.  Quickly started asking myself questions – mini-Moses? do they have Alligators here?, how about Bears?, Wolves?  anything else that can outrun me to the car?!?  Linda can attest, curiosity usually gets the better of me especially when I’m with camera.  There I stood, camera at the ready watching the weeds spread in a random pattern down the hill maintaining a general vector directly to where I was standing.    Eventually the line made its way to a clearing about 40 to 50 feet uphill from me.  Out popped the largest damn Skunk I’ve ever seen. Not like you mistake the look of a Skunk, but this one was clearly a ‘roided up gym rat.  I could have ridden it bareback back to the car.   Unfortunately, found myself staring directly at it in ah vs snapping away and saving the draw dropping for back in the digital darkroom.  By the time I snapped out of it and started taking a few shots, it had made its way a bit too close to my liking.  That’s when it did this. 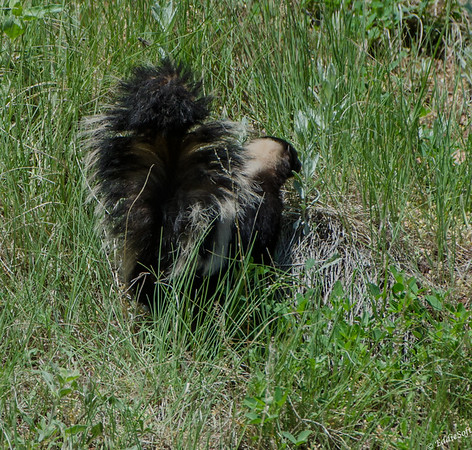 OHHHH CRAP.   I doubt the local grocery store stocks enough tomato soup to take out whatever load this thing can launch.  Time to heed Linda’s voice of reason bouncing around inside my head and seek out safer ground.  Unneeded concern.  the Skunk was just turning around to head back up the hill and not posturing for riot control.  A few minutes later it was parting the weeds once again.  Watched the channel all the way back up the hill thinking the entire time how my reference scale for these critters was just blown out of the water.  Curious, did a bit of research on the Illinois’ variety.  Per the Illinois DNR website learned that they range from ~2.5 to 11 lbs with a 20 to 30 inch range putting them in the domestic Cat range.  Clearly, I’ve previously only witnessed the low end of that scale and the specimen above was clearly on the top end – apologies for not having a good reference point – wasn’t about to stick my hand next to that beast.  Also learned that their defense spray includes chemicals referred to as mercaptans and apparently the tomato soup thing is more of folklore than reality and tends to only mask and not breakdown the smell – another myth shattered.

Well, Linda and Rave have finally made up and heading out to once again take on the agility course.  Hopefully things will go a lot better today, otherwise it is going to be a looooong trip home.  If Raven’s turns away from Linda and raises his tail, we’ll know EXACTLY how the runs went.