I’m a post short against this month’s blog quota.  Luckily, the post material queue is packed to the brim and really more of a matter of “which” to bring versus “what” to bring which quite frankly is a big stress reliever.  I noticed there were still Halloween decoration topic from last year’s epic Haunted Trail event.  Admittedly, I’ve purposely avoided these posts as they tend to bring up some sad memories that occurred at this time. Problem is, if I don’t get to these by the time the new haunt season comes along I’ll be way behind – and as I have learned from the wildlife photography posts, as soon as you get behind there is no telling if you will EVER get caught up.  So, going to try and keep the eyes dry as I relate one of the new decorations for the 2019 Haunted Trail of Tears (link here). 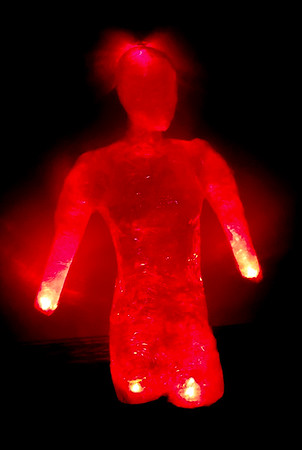 Hit the jump to see how Johnny here was put together!

Now this is a project that I had attempted multiple times previously without zero success.  I saw some examples of this concept in one of my home haunt how-to books and some really nice efforts on Pinterest (yes, I am a Pinterest user and for the record if you are into haunting… you need to suck it up and get on there as well – the wealth of ideas and tutorials is amazing – you will have to take some ribbing if your friends find out, but trust me … worth it).  In concept it looks pretty easy.  In reality – not easy at all.  My previous attempts primarily failed due to my wife’s refusal to help.  Now, she is well known to be my voice of reason and likely had valid points, however, this is not a decoration you want to try on yourself.  For one thing wrapping yourself up in packing tape is hard enough, but trying to cut your way out of it yourself is a whole other world of difficulty.  I remember my first attempt at just making hands and trying to put a first layer of packing tape on backwards in order to put the second layer on normally to keep the tape from sticking to my hands.  After that failed, the next year I tried putting plastic on first and then wrapping the tape around it and that was a hot mess.  For 2019 (my third year in a row to get this to work), went a much smarter route. 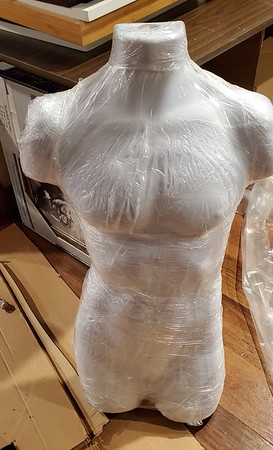 I had previously picked up a bunch of mannequin shells for my Posey frames (link here).   When I saw in the haunt book a suggestion to use one of them for the body, I immediately leaped out of the chair and went to work.  That idea solved the multiple problems that plagued me previously – had 360 degree access, could wrap as tight as needed without causing a health risk and best of all didn’t need one bit of Linda’s help (which also means no voice of reason, but a  risk I was willing to take). First thing I did was stuff sheets into the back to give some back definition.  I then wrapped it with very thin painter’s sheeting so everything stayed put when putting on the packing tape.  Once the sheeting was added, I hit it with a heat gun to shrink it to fit as tight as possible – not an option when you are the guinea pig. 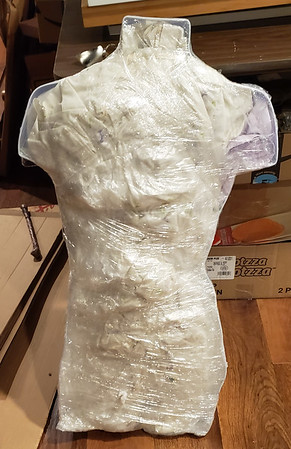 Once that was done, simply started wrapping it tightly with packing tape making sure to have at least 2 or 3 layers covering the entire thing.  Once satisfied it was stiff enough, took out the scissors and cut a vertical slit up the back and extracted the mannequin leaving a nearly clear replica. 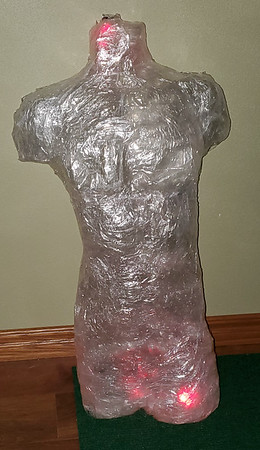 Next up the head – now this is the part that I knew was going to be a major issue with my first two attempts – something about letting Linda wrap my entire head with packing tape didn’t sound like a good idea even to me.  After looking around the room it occurred to me – as in it was staring right at me.  I use foam heads for the Posey’s, why not just use one of those as the form duh!  Got some more sheeting, covered the head and hit it with just enough heat that it didn’t melt the foam head (at least keep to a minimum), but sufficient to get a good definition with the plastic.  Wrapped it with some packing tape and like before put a slit up the back to extract the foam head.

You can see the head had some melting, but the sheeting didn’t stick.  Note, slits in the back of the body and the head were simply closed up with packing tape to make them whole.  I did leave a small opening in each in order to put lights in it later. 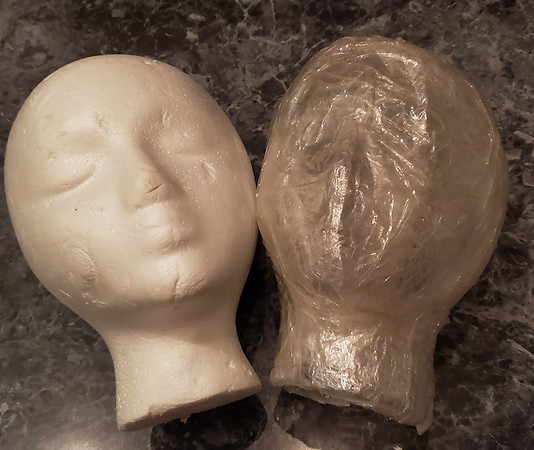 With the head formed, it was just a matter of using more packing tape to fix it to the body.  I wish I would have put something to keep the neck more rigid while doing this as I got a few bends in it while wrapping the tape around it which made a weak spot that allowed the head to bend if not careful on transport.

As a test run, I inserted a few red LED lights I had laying around. One in the head and one in each of the thighs.  The pictures do not do this justice.  It looked really good in the dark basement and gave a very even glow that looked like it was made of glass.  There was also a bit more resolution in the face that didn’t come out due to extra exposure.  So cool!

Same state, just from the side.  Again, the camera phone was struggling to get focus as the sensors were telling it something was there capturing the light, yet not triggering its focus feedback.  Note, this is the exact same problem I had trying to get pictures of it for the Haunted Trail walkthrough – unfortunately, not a single one of those came out and thus none to provide in the post – bummer.  Note, I kind of cringed a bit at the shot below as the LED burned a “light hole” in the shot making it look like “Johnny” took a bullet to the head.

Seemed a bit morbid to have a ghoul with no arms or legs – well, to be truthful, I already have another Posey prop without a head and appendages and I thought I’d try and keep some of the nightmares down.  Decided I’d add some arms and then it would look like it was coming out of the ground – or someone managed to chop its legs off …. for the kids’ sake, let’s go with coming out of the ground to minimize the amount of counseling needed post walk through.  Looked around for some method to make the prop’s arm.  I liked the concept of using the mannequin due to the ease of shrinking the plastic and wrapping it with tape.  As a substitute, threw some material on the end of a large PVC pipe that was laying around and repeated the process.

It looked a little dorky in the picture above, but when attached to the torso it really filled out the shoulders well and for the most part looked pretty awesome. 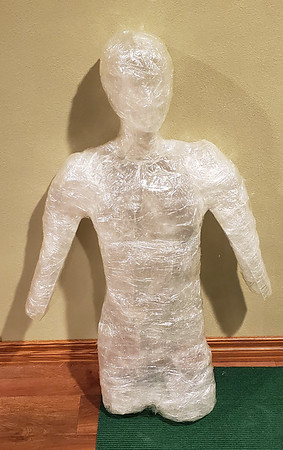 … and now with lights… or as Johnny Storm would say “Flame on!”.

For some reason I either forgot to take pictures of the final step which was putting hands on it or I accidentally deleted them.  Either case, the results are the same as I am unable to show you how those came out.  Not the best work I’ve done so probably good you didn’t get a shot of those.  I ended up using a pair of skeleton hands for the model structure, but did not heat shrink the wrap as I didn’t want to jeopardize a ridiculously expensive hand prop.  This resulted in the same issues as the year before and once again had difficulty getting the plastic off the hand.  Gave up, slit the tape all the way  up the fingers and then tried to tape them back up once the prop was removed.  Eh, it worked well enough – taped them to the ends of the hands and officially deemed it worth of the trail.  Next year I will make sure there is a better picture of it out in the woods as it truly came to life sitting in the weeds in absolute darkness.  3 times a charm!