Hope all is going well in your neck of the woods!  Not much happening here as we are still in lockdown.  Thought there was a glimmer of hope someone would prime the economic pump, but for now everything is still on hold.  Fortunate for me I could do my job at the bottom of a volcano as long as there was Internet connectivity – who knew 35 years ago I’d be heading off to college to prepare for an occupation that was pandemic resistant.  When you work with coworkers all over the world on any given day (and night), sitting in your den 40 minutes from your corporate office doesn’t feel that much different.  Now, there is ONE big advantage, I can look out my windows into our now snow covered woods and take a break from all the key pounding. 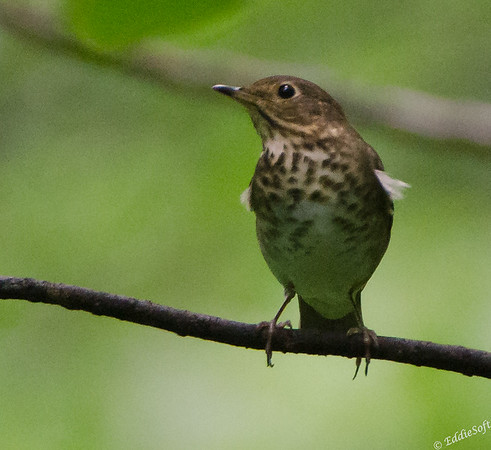 Hit the jump to see more grainy assed shots of this brush bird.

Then, when the day’s work is wrapped up I can switch over to my other keyboard and start pounding the keys for the blog.  For the record, I cannot thank my mother enough for forcing me to take a high school typing class as soon as she found out I was interested in those “computy thingies”.  Ah the memories of a classroom full of clicking from the IBM Selectric Typewriters trying to produce a line of “the quick brown fox jumps over the lazy dog” without an error.  Of course this was slightly harder with a class full of comedians that would wait until you looked away and then raise the tab on top of the element ball causing it to leap out of the machine and hit the floor on the next shift press – most of the letters on our papers looked more like granite chiseling that actual fonts as a result.  Does the coronavirus make you forget what you were doing.. if so, I might need to go check my temperature… one sec.  Okay, temps normal and I remembered what I was doing – writing a post.. on a new bird.  I will admit the spots on our specimen reminded me of the smashed ‘e’s on our old typewriters except in brown and not black ink. 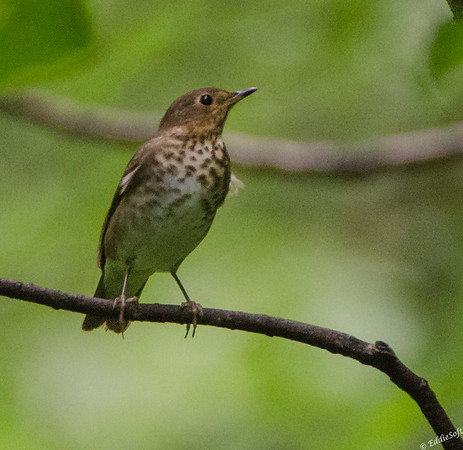 It was these spots that first got me excited when we saw this bird land in a nearby thicket.  Ron and I were out birding Starved Rock State Park in LaSalle County, Illinois.  Back in May of 2015 when this shot was taken, this park was still a great place to bird.  There is a large stair and deck system that lets you get above the tree canopy for easy access to the high ranging birds and then a few minutes later be down on the wood’s floor taking aim at Thrushes darting among the branches.  Outside of the current pandemic season, this park is now overrun with people pouring out of Chicago.  Word has it they are going to start limiting the people that can visit in a day – that’s when I tap out and find another place.  Even if you get in, the mass of people and noise push all the good birds too deep to get decent shots.  Even back in 2015 it was hard enough to get a bird to come out into the open.  This Thrush flew by, landed on the branch, flashed me its spots and fled.  About a minute in total to get an unobstructed angle and push the ISO to the moon to get something in the tin.  No idea if Ron managed to get it dialed in, but there were two shots (above) that you could at least distinguish it belonged to the bird family and just enough features to narrow it down to three possible species – the Hermit, the Swainson’s or the Wood.  All have spots, all are present at one time or another in IL.  I was able to throw the Wood out of contention as that species spends too much time in the snack aisle.  They also have a white belly with very crisp spots compared to the smudgy ones on a more buff colored canvas. 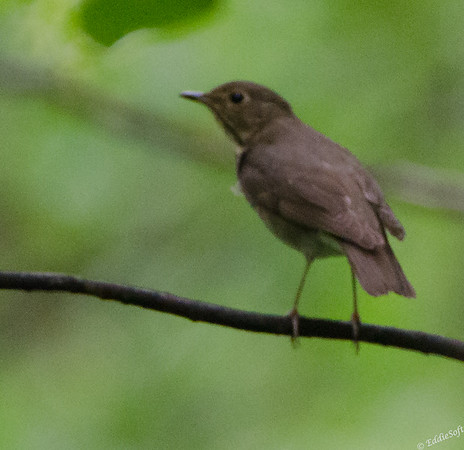 That left me with two.  Wow, are those two hard to distinguish.  Both are smudgy with their spotting, both have similar statures, both have eyerings and their overall coloring is pretty close – at least from the front.  The Hermit has an eyering  whiter than the supposed buff version of the Swainson’s.  My grained pictures were not going to pin that difference down.  Luckily, I had one shot of the back – crappy as it is, it revealed the difference.  The Hermit has a cinnamon colored tail that contrasts with the more basic brown/olive adorning the rest of the back and wings.  My specimen .. if you squint real hard, you will notice that there is very little contrast between the tail and the wings/back.  Yes folks, we indeed have a Swainson’s which represents a +1 on the bird list!  Just in time as Ron managed to claw back my gain by scoring a Great Horned Owl last weekend. There was a reason for the extra filler at the top of this post – to cover for the fact that the interesting fact for this bird is embarrassing at best.  Apparently they hold a Pitch Perfect riff-off to settle territorial disputes – sigh.  The virtual element ball just flew off and hit the floor so I’m just going to take that as a sign and put a bow on this post.