Greetings everyone!  Please bear with me as I reach up and rip off another page on the ol’ timekeeper.  I used to get really excited about April as it was the traditional start of the race season for me.  Two back to back half marathons (second one with a 5K event the night before) for the last two weekends.  As everyone is painfully aware, these are not normal times and true to course, those square boxes on the calendar are absolutely blank.  The first trail run has offered our money back, a reduction in fees or a virtual event and the other road race (Illini Marathon) has been postponed to an unannounced time later in the year.  The trail run was a charity event for Make a Wish Foundation and therefore I offered to continue to support the children and just run virtually – the Illini one is going to be an issue as all the races are backing up and guessing there’s either going to be one hell of an end of the season (which already ends with 4 halfs in 6 weeks) or it is going to be a disappointing year for this self-proclaimed medal whore.  If that was not depressing enough, the very foundation of my birding identification skills has been rocked 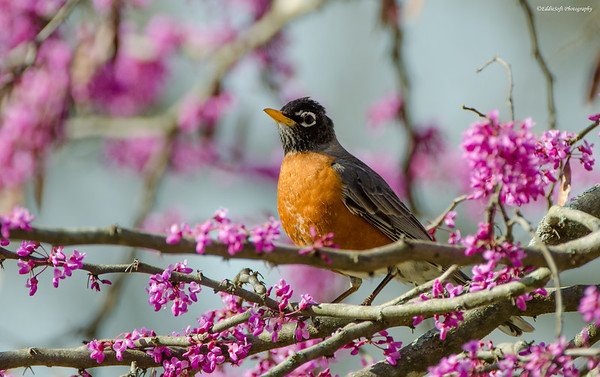 Hit the jump to read more about our familiar friend.

My astute blog reading friends were quick to the draw, fully loaded, barrels a blazing on my last post.  Apparently the featured bird of the day ended up being a very recognizable species.  Who knew that many people were well acquainted with a bird I have only encountered once in my short birding career.  Granted, two of those readers come from more favored regions for the Common Goldeneye, but still I’ve been humbled – shook to the core more like it.  I was looking through my queue of birds to kick the new month off.  Go with the Downy Woodpecker… ummm not sure, it might be a Hairy, wait, how about the Northern Flicker … eh, they might want to know if yellow or red shafted and my angles may not be the best.. I know, how about that Nuthatch, it’s pointed down the trunk that’s gotta be one … of course, Creepers do that to aaaAAAACKK.  Fingers twitching, teeth chattering legs fidgeting and good lord I think some of my hair just feel out.  One last desperate run through the queue, there has to be something I can post with confidence – something easy, close to home, universally recognized (at least in the States), tell-tale identifiers and something that has at least one or two decent shots that made it into the tin.  Got it!!!!  Yes folks, going with the American Robin. 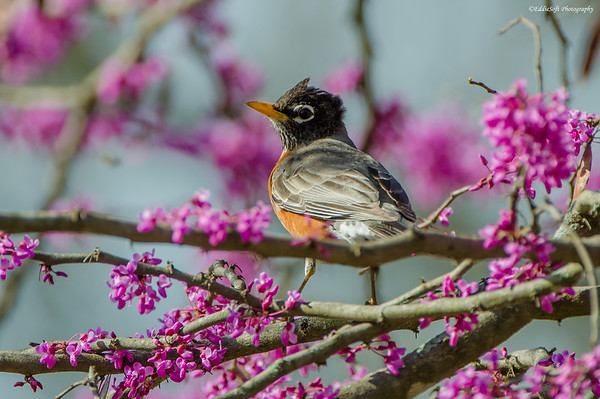 There isn’t a single locale in North America that does not get a chance to experience this full bodied Thrush – at least some point during the year.  They are the largest of the Thrushes in North America and have the distinction (at least for me) of being a standards bearer.  I tend to use the Robin as my reference scale while in the field – 1/3rd of a Robin, 1/2 a Robin, equal to a Robin, 2 Robins, 20 Robins.. you get the picture.  Distinctive in their coloring makes them an easy find and equally easy ID.  Plump orange bellies, yellowish bill, grey overcoats and if you still haven’t figured out, a pronounced broken white eye ring.  They also love them some worms.  Get up early and check out the yard where you will surely find one yanking a juicy meal out of the ground. 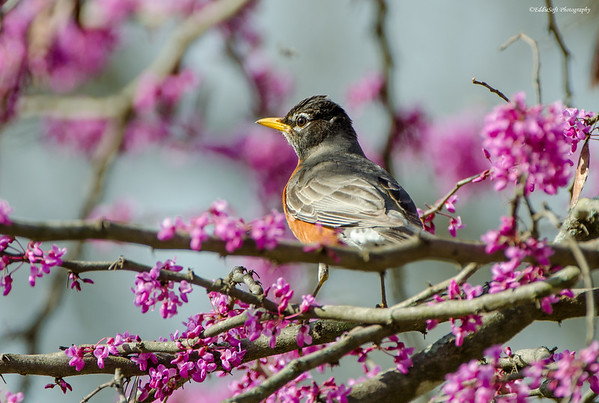 Robins are my indicator that Old Man Winter is about to release its hold on us.  Although they really do stay year round in the States, they are far less active in the winter months.  As the temps start to warm they let loose with their musical songs to ring in the new season.  We are eagerly awaiting the arrival of our adopted pair who have been returning each year to nest in the bushes next to our porch.  The specimen featured here was actually found on our trip to Iowa.  Linda was giving me a tour of her home state and we ended up at Lacey-Keosauqua State Park – one of Iowa’s largest state parks in Keosauqua IA.  Keosaugua is a Native America term meaning “the stream bearing a floating mass of snow, slush, or ice”.  In 1926 Lacey was added in recognition of Major John Fletcher Lacey who was a strong advocate for conservation in Iowa and instrumental in establishing the Iowa park system.  It is a very beautiful park complete with some really nice hiking trails and the very easy to identify American Robins!  The pictured here was busy enjoying the trees as they began to flower.  In a tip of the hat to our friends across the pond, I have to admit I slightly prefer the coloring on your Robins (Eurasian variety for us)

Will call it there – hopefully you are able to at least get out and enjoy a nice walk – if there is a plus side in all this chaos, it has given us the opportunity to get back in touch with nature…  hopefully not in the sense of hunting for large leafs for TP hehehe.