Well, it is time to get this set of posts out.  I have been avoiding it due to some emotional memories that come along with this year’s Halloween extravaganza.  Waiting any longer isn’t going to change the situation so I need to get the Haunted Trail of Tears 2019 taken care of while I can still remember all the work it takes to make this thing happen.  Original intent was to slam this into just two posts, but there are way too many images to force on you all at once.  As a result, went ahead and extracted the prep series out separately – this way you can ease into the barrage of photos that’s coming your way!

With Linda’s surgery, in August, we opted to push the date a week to give her extra time to recover and more importantly me time to make up for the lost weeks being up at Mayo.  I had spent a large part of the summer building the new all-weather prop sensors.  Think by the end I had produced over 60 of those devices building on our previous design with an added feature of being able to put the batteries in ahead of time so we could simply switch them on come event start – I cannot even begin to explain how great that was both in savings during the activation step and then more importantly being able to turn them off at the end and not have to worry about getting them out of the woods if bad weather hit us (like last year.. and year before that …).  Unfortunately, that meant rewiring all the props to use the new sensor.  Thankfully, Ron came to my aid and helped get everything converted over!

I also had to finish up a number of new props that where being worked on since a month after last year’s effort (yep, there is no Halloween downtime here at Intrigued ha).  Here’s Ron with a major addition for this year’s trail.  Something tells me you can guess what that is.  Linda was excited about finally getting that life size horse out of the basement after 10 months.  Ron actually came down a week ahead of the planned date which was greatly appreciated.  It is hard enough to get all of last year’s props out and each year it grows bigger and bigger.  The zombie horse was just one of the new items making its debut this year.

Hit the jump to learn what happens behind the scenes of the Halloween Haunted Trail of Tears extravaganza.

Of course the electrical work is one thing, but all the decorations have to be pulled off the shelves and all the larger props put back together.  Thankfully we built a large outbuilding which works out nicely for all this larger pre-work.  I was able to get on that work pretty quickly and being able to build and stage without having to worry about the weather is a godsend.  Each night I’d spend a couple of hours dragging the bins off the purpose built shelving and put as much as I could together before heading for bed. 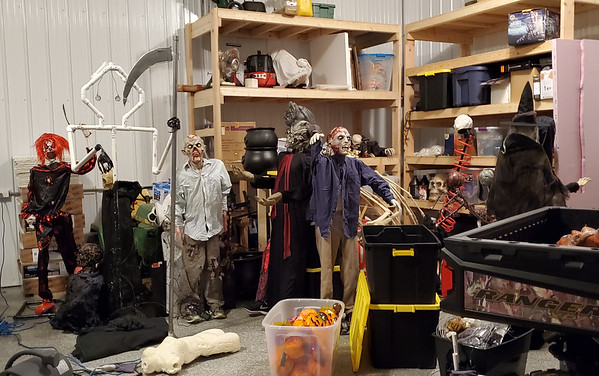 It always takes a surprising amount of time to get all the Poseys put together and the costumes applied.  Admittedly this is a bit my fault as each year’s new set of Posey’s came with design enhancements requiring me to recall how each version went together and when possible retrofit the older ones with the same upgrades. 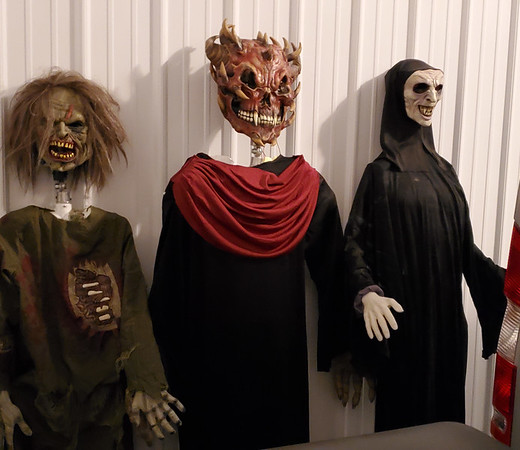 Then there’s the comedians of the bunch that are constantly goofing off while I’m trying to get things done.  Turn my back on HH and the next thing I know he’s trying to run over the other Poseys with the lawnmower.  Bad Horseman, Very Bad Posey! 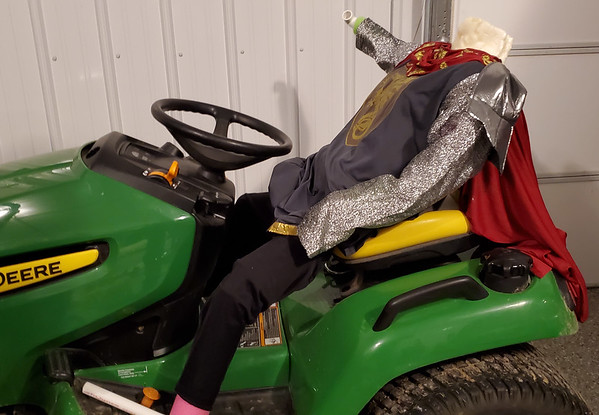 Slowly it was coming all together.  One by one the Poseys were brought to life.  Some of the mechanics had to be fixed from the previous year’s roughness while trying to get everything stowed away.  Those wiper blade motors are a bit touchy and every year find myself having to solder on new clips to connect the leads from the controllers to the motors. 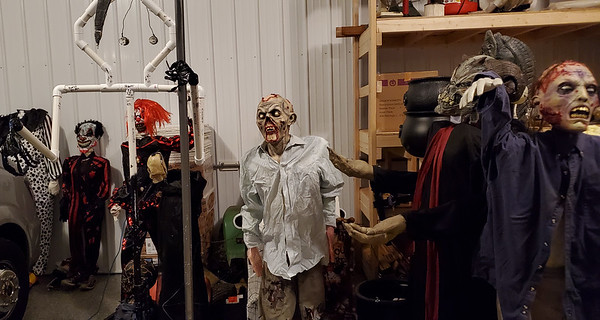 While unpacking noticed I had built some extra Posey bodies for last year’s trail that didn’t get finished in time to use.  Grabbed a few arms and legs left over after some version upgrades and slapped them on.  Pretty proud of myself for getting this thing designed in my head and put together in under 30 minutes – love it when a plan comes together.  Will point out this new prop out when I get to the trail shots.

A week before the date of our party, my Father passed away.  I will never forget the moment when I received word and how quickly something that had consumed my every thought and action leading up to that point seemed so insignificant and so far away.  The Halloween trail was quickly pushed out two weeks (had the 50K the following week – link here) and did my best to let everyone know (felt really bad that two people missed the reschedule and showed up at the original night wondering where everyone was). 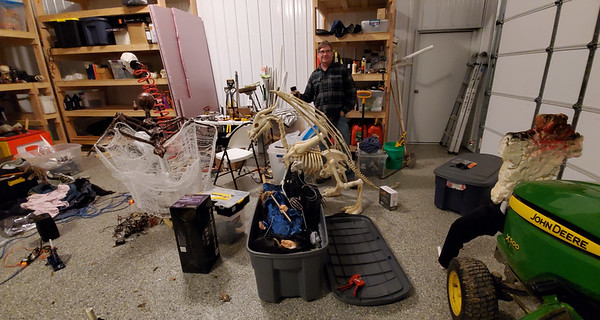 Once all the family arrangements were completed I slowly started immersing myself in tasks to keep the emotions at bay.  I was able to take a few extra days off of work before the big day giving me extra time to get the mowing, caution tape and more importantly a bridge finished.  Ron came down the day before to help out on all the tasks that still needed to be done – trust me, every year there’s work still going on when the guest start arriving.  With his help we were able to get the last of the sensors wired to the new props… like Ned below. 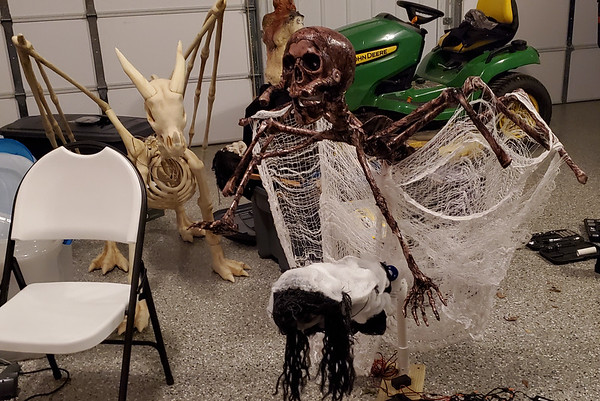 I’ll be putting a full post on Ned (as in ArachNed – think Ron coined that clever name) in an upcoming Halloween decoration post so I won’t go much into that beyond this thing is downright creepy.  It really came together when we started putting the webbing on. 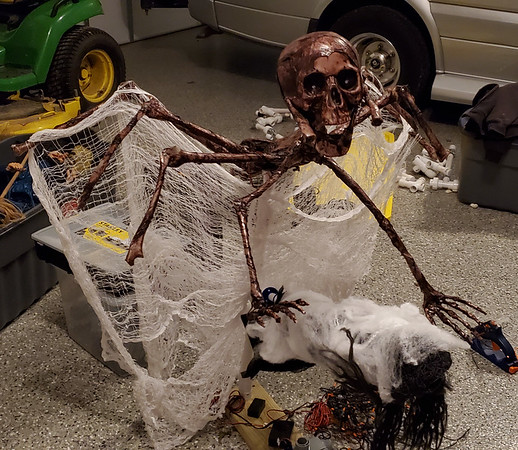 I’ve often thought it would make a scary ass movie to film someone walking around the staging area in the dark with just a small beam flashlight.  I even have to brace myself for the scene when I raise the garage door each night to start the night’s prep work. 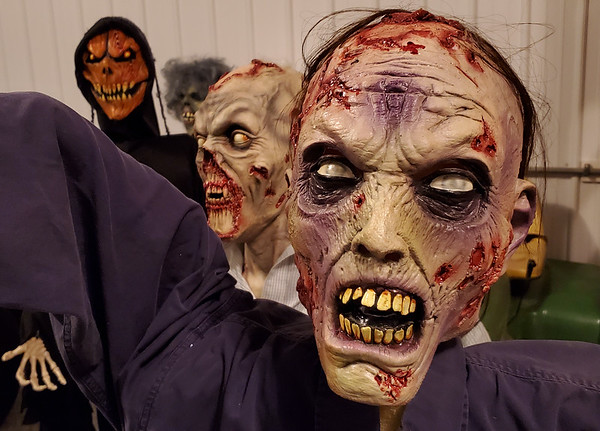 Ha, Ron just having some fun.  Someday I should get this printed and give it to him to put on his desk.  You’d be amazed what a week of sleep deprivation does to your sanity. That Friday before the big day, we started hauling everything out to the trail.  Linda convinced me the pull the trigger on a new UTV this year – thank you dear.  Without that we would never been able to get this trail up in time.  The weather wasn’t exactly cooperating leading up to the build day leaving the large downhill very wet and flooded in some areas making it prohibitive to get the big truck down.  The UTV did just fine and allowed us to easily navigate the new bridge.  Also cut down on all the trips up and down the hill for everyone that helped out this year (Sung, Dan N. Andreas, Craig, Billy, David and countless others that chipped in whenever needed).

Oh, speaking of the bridge, we put up a 24′ by 8′ freestanding bridge across a gully/stream that the year’s worth of rain had managed to carve over 13′ down.  Dan N. and I finished up the final decking that Friday morning allowing us to get the decorations directly to the trail location.  Not sure if it was the hard work that exhausted Dan below or if he was still scared from when we were taking the decking off the old bridge and uncovered one of the biggest live Possums I’ve ever seen – now that was a stress standoff before she (guessing she was pregnant) decided her odds were lower against the three of us – what she didn’t know is we figured the odds were still in her favor. 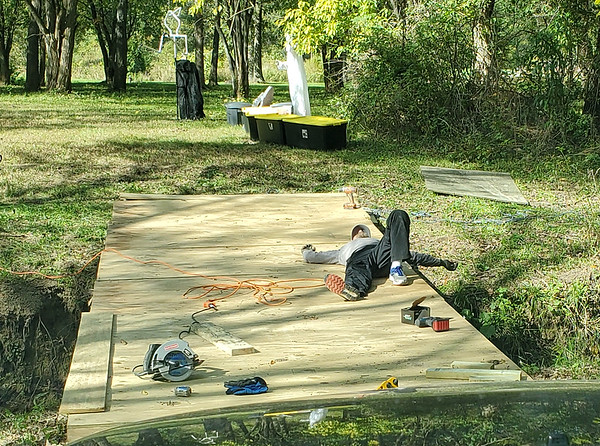 Well, that pretty much sums up the prep shots.  With all the bad news and trying to put the final training runs in for the big 50K, it was an absolute miracle we were able to pull this all off.  Big thanks to all that helped and especially Ron who puts his sleep on hold for two weekends for us to even have a chance.