Greetings from the white tundra.  For those curious (and hopefully in warmer climates) it is currently 3F out with 18 mph winds with warnings of windchill temps below 20F.  A far cry from the relative desert like conditions the Texas Gulf Coast is getting at the moment – although I did think it would be warmer than high 50’s/lows 60’s.  Time for Linda and I to get back in our RV and get our butts to some warmer settings ha!  I have been holding off on talking about our holiday activities, but most of you know we once again headed back to the Texas border for a little R and R after a rather rough ’19.  Kicked the year off right birding the Gulf Coast and checking our favorite spots along the Rio Grande.  It will be a while before the fruits of that endeavor get fit for consumption 3..4..5..6 years…hehehe.. 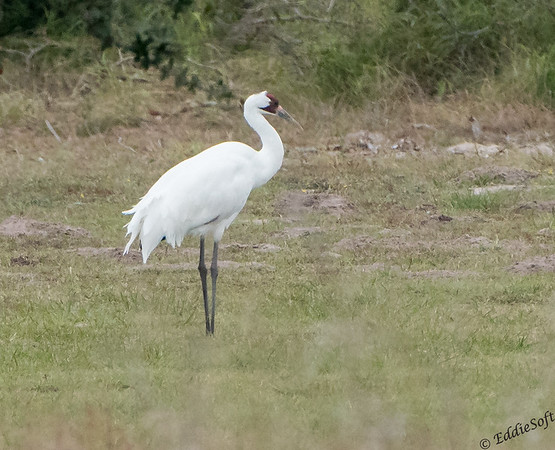 In the meantime, thought I would go with the bird that has a lock at the top of my list for favorite North American birds.  Now, a bit of this decision was based on the fact if you read my previous bird post you should already be standing about 10 feet away from your monitor.   Hoping that is sufficient distance to make these pictures somewhat viewable – keep thinking to yourself that there’s at least one bird somewhere in the shot  – to help you out, it is white and really tall.  These birds top out in the 5 foot range and command attention whenever in their presence.  Reminds of the traveling basketball team for the Great Egrets. 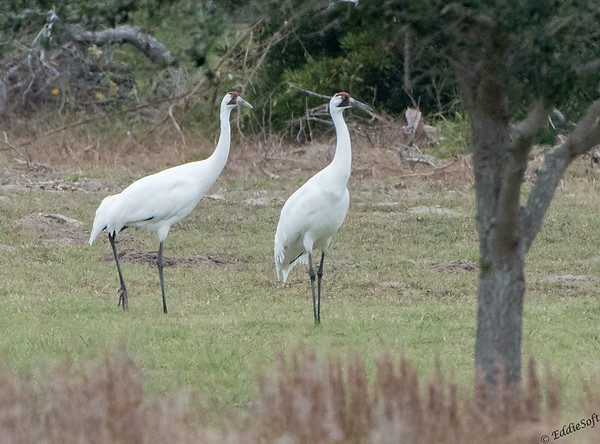 Take a few brief steps toward the keyboard and hit the jump to read more about these Cranes (then quickly take a step back).

To round out the dimensions, add in a 7+ wingspan and 15 pounds of whoop ass.  Interesting enough, the Pelicans featured previously (link here) come in heavier, yet don’t stand a chance in a game of 21.  We have the luxury of driving 4 hours north to see these beauties in captivity.  The International Crane Foundation is outside Baraboo, WI.  If you get a chance, drop by and check out the wide array of Cranes they have from all over the world (link here).  Better yet, become members like Linda and I and help their mission to preserve these birds for generations to come.  It only took us one visit to know this was something we wanted to support, much like the International Wolf Foundation up in Ely, MN.  The Whooping Crane is making a steady, although cautious and slow comeback thanks to conservation and focused reintroduction efforts. 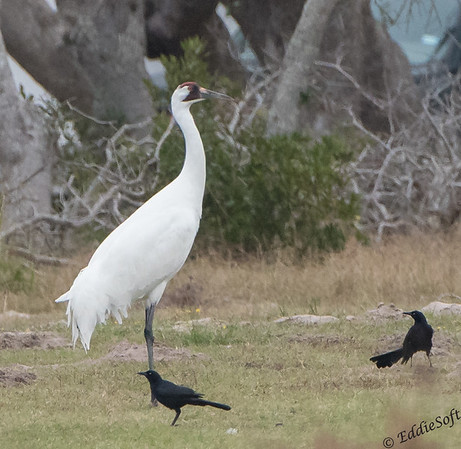 The Whooper was nearly decimated dwindling to a mere 21 specimens left in 1941.  Think about that for a minute, that is less than a standard case of beer.  The exact number of these Cranes today tends to vary based on references on the Internet falling somewhere between 500-700.  I know 2018 was a good year for these Cranes.  Per the Bird Watchers website (link here), the Aransas NWR flock was over 500 itself with 49 juveniles thanks to a record number of nests (98) in their breeding grounds of Wood Buffalo National Park up in Canada.  This is the only truly self-managed flock in North America.  There are a few other flocks assisted by breeding programs (WI, FL and LA).  Have not received word yet on how the 2019 year was. 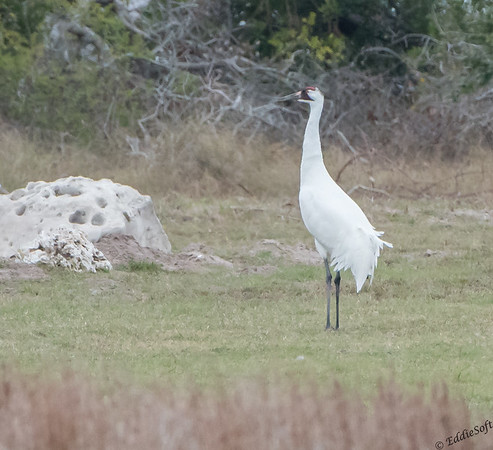 These specimens are part of the Aransas flock.  They were taken on our birding trip down the Texas Gulf Coast back in December 2017.  This was the second time we had the privilege of witnessing these majestic birds in the wild having seen them the previous year in this very same spot (link here).  Now, to my defense, these birds were a LONG ways off.  The Beast was so far extended it was straining against the bayonet mount to get every available morsel of reach.  Thankfully these birds are so big or you’d be looking at a white bag in a green field (trust me, I have enough white trash bag pictures from hunting Snowy Owls).  The thing I am most proud of is these Whoopers are not wearing any jewelry.  Nope, tag free which is a definite rarity when it comes to this particular species.  You might have noticed, the previous encounter had one wearing both a tag and a telemetry device.  This pair was living large off the grid.  Similar to our first encounter, this pair was traveling with a juvi. 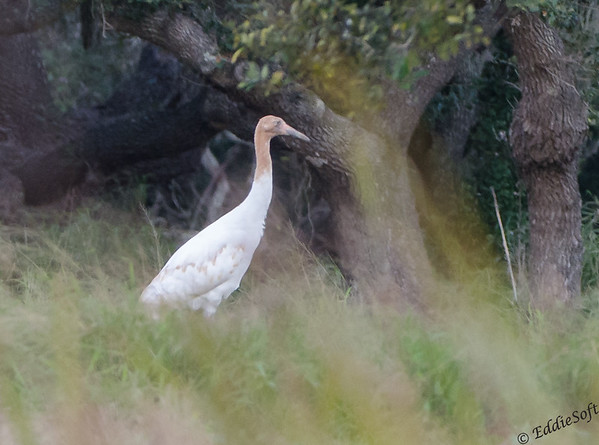 It was hanging even farther back from our position keeping an eye on the parental figures while exploring the new world.  A truly wonderful experience and one that came with an extra amount of relief.  In the time between our first encounter back in December 2016 and now, the Texas Gulf Coast experienced a horrific event we refer to as Harvey.  This Hurricane hit just a few months back in August bringing with it $125 billion worth of devastation.  Being in the Midwest, we are familiar with the force Mother Nature can bring to bear using just the wind and rain – add in a raging body of water brings the destruction to even higher levels both in breadth and impact.  It was truly humbling driving around Rockport seeing the aftermath. 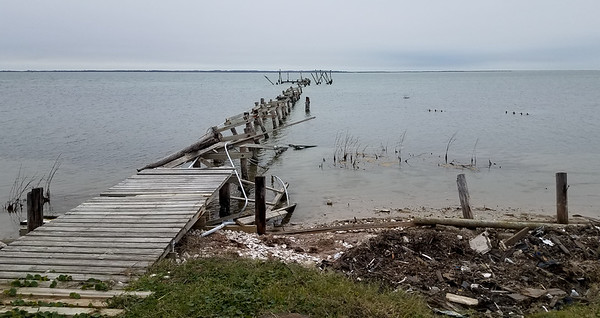 Very little was left standing.  Houses we had seen just a year before were nowhere to be seen.  Entire groves of trees were cut down like weeds, docks left ravaged, their bones laid bare.  There are no words to describe the feeling as we drove along the highway staring at miles and miles of Rockport’s dreams and hard work piled in the median.

We are glad to be able to report that two years later, Rockport has risen from the depths of despair – rebuilt their city into a shining example of resolve and community strength.  The worst fears on the fate of the fragile Whooper community were also set to rest as we were once again privileged to see the Cranes on our recent visit (pretty sure we even got better shots!).

Better call it a post and make sure the pipes are staying warm.  For those that enjoy more than one season – stay warm, spring is almost here … or not ha!.