We are closing out a long two weeks of travel with an agility show at the Purina grounds near St. Louis MO. Usually these shows drive me crazy with the amount of downtime involved.  Get the agility course set, receive instructions from the event judge, walk the course to become familiar with it, wait for your dog’s turn in the ring, enjoy the maximum of 2 minutes of excitement as Raven leads Linda through the obstacles, watch Raven bask in the post run accolades and then sit for what seems hours as the rest of the dogs compete and they start setting for the next round.  Absolutely brutal especially since this is really Linda’s thing as I am the designated Sherpa.  It is a great feeling to see Linda back on her feet and enjoying herself in the ring again – it was getting rough leading up to the surgery as I could tell she was really struggling to get through the stop and start sprinting between the obstacles – looks harder than my ultra marathon.  This time I could use the rest to get the batteries recharged again and the downtime means I get a chance to pound out some posts – yeah! 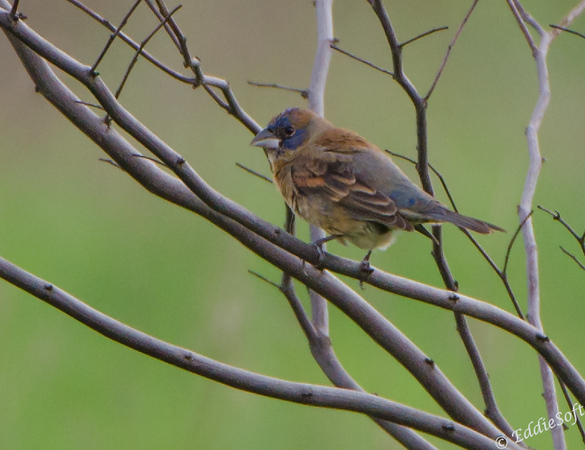 Was checking the post queue and decided I would break down and go with one that has been in there for a while.  Each time I considered going with it I decided the execution was too poor and opted to wait.  Unfortunately, the soft images are of a bird I have yet to checked off my official list and I need to push my counter up (hmmm, wonder why).  So, without further delay, take a few steps back from your monitor so these images of a nonbreeding Blue Grosbeak do not look so bad.

Hit the jump if you really want to see some more soft shots of Mr. Blue.

You might want to take a few more steps back… couple more… one more small step – there.  They really look the best if you have to squint a bit.  As mentioned, this series have been growing a bit stale in the queue.  They were taken back in May 2015 at a small state park called Matthiessen.  If you are not familiar with this place, it sits in Oglesby, IL about 1.5 hours or so north of us.  Most people are more familiar with the state park just up the street called Starved Rock – or as I’ve started calling it “Tree Starved Chicagoans”. Pretty much forget about enjoying this park during the summer months anymore.  Even if you make it through the gauntlet of southbound cars your chances of getting any birds to stick around with all that noise is less than me agreeing to run Raven in the ring.  So, it was probably lucky that it started out in an absolute downpour and stayed overcast and threatening for the rest of the day – which to my defense did cause some of the execution issues. 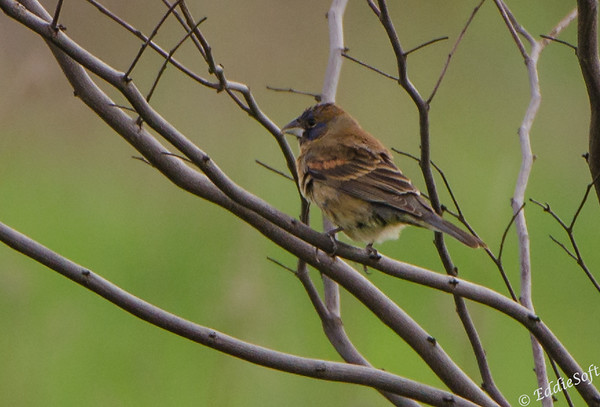 Ron was able to join me for a bit of birding that day and once we took our second showers for the day scoured Starved Rock to fill our tins.  Not a lot out that day, but we managed to get some nice Summer Tanagers (link here).  Eventually we headed down to Matthiessen to check out what they had to offer (beyond more upstaters splashing noisily in the cut rock streams).  On the way in we noticed this lonely specimen hanging out in some brush.  At first the blue threw me off as we have an abundance of Indigo Buntings in IL, but on closer inspection it had a larger build and beefier bill.  The tipping clue was the chestnut wingbars.  Definitely not an Indigo which left the Grosbeak option.  As it was not in its full breeding plumage, it wasn’t adorned in the more pleasing deep blue.  Still, I’ll take a +1 any day – especially for a bird that was a bit north of their normal breeding range (according to Cornell, they typically stop along the southern tip of Illinois.) 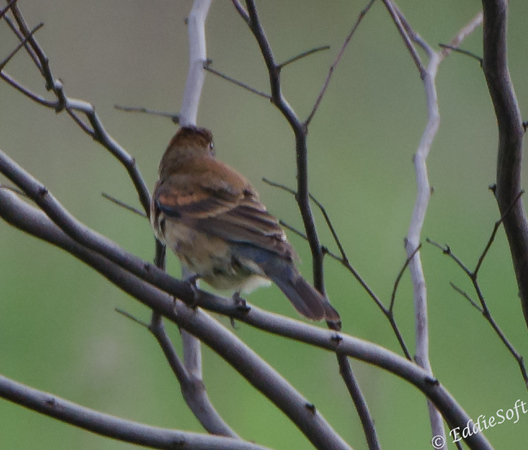 Not a lot of picks for Mr. Blue as it saw Ron, realized he was from Chicago and high-tailed it out of there.  My in- flight picture looked like a water color mosaic painted in the middle of a hurricane – no distance from the monitor was going to fix that one ha!  Let’s get to some quick tidbits to reward you for your precious time.  From a region perspective, they do push north for their breeding activities almost making it to the US border up through the Dakotas.  Once the nip in the air comes, they head directly south – do not pass go – meaning the eastern residents have to brave the trek across the Gulf of Mexico for their wintering grounds in Central America.  The Grosbeaks are fairly secretive preferring to hang in the brush and low thickets.  Cornell recommends you listen for their very musical call as your best chance of finding them.  News to me, they say they will often twitch their tail from side to side – will have to look for that the next time I come upon one (fingers crossed I get better shots)

Time for Raven’s 2 minutes of excitement – take care everyone and if you are in the Midwest stay safe from the wintry mix (sleet/ice/snow) we are currently experiencing.