I put my blogging hobby in jeopardy tonight.  Linda and I checked out a German Christmas Market (Christkindlmarket) in downtown Chicago or as I like to refer to it as – Ron’s neighborhood (cue comment ha).  Really nice German/European themed market full of cultural foods and gifts.  We took a special liking to the cider and hot chocolate in souvenir mugs and an amazing amount of really cool glass ornaments.  Show me a colorful glass bird ornament and I switch into “here, take my money” mode.   Problem was it was an OUTSIDE market.  Start with the windy city’s namesake, add in a heaping amount of plunging temperatures gives you some mighty bitter conditions.  Somehow made it back to the hotel without my fingers falling off – still tingle while I type.  In an attempt to bring them back to room temperature, thought I would feature a bird found in much warmer conditions. 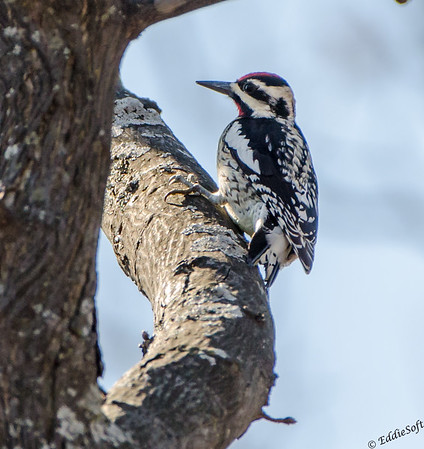 Actually this post features specimens found in multiple locations over multiple years and in different months of the year (yes, all warmer than the tundra conditions we experienced tonight).  This featured bird is a member of the Sapsucker species.  It is pretty easy to tell the Yellow-Bellied Sapsucker is a member of the Woodpecker family.  Long, powerful bill, well clawed to support hanging on the sides of trees/branches and adorned in the common colors of black, white and red. 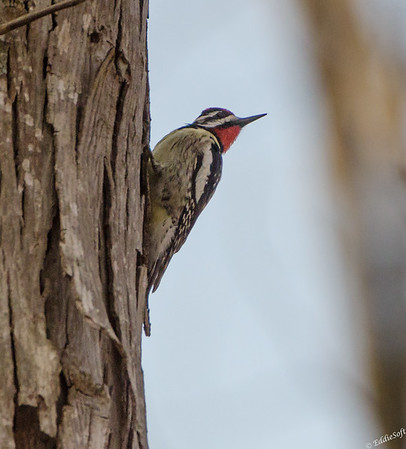 Hit the jump to read some more about Mr. Sappy Sucker!

It is really their feeding behavior that sets them apart from the other members of their family.  These Sapsuckers were named from their ability to obtain nourishment from the sap of trees.  Although we birders prefer more visually indicative names, we gladly accept behavior names over completely indistinguishable names like Ring-Necked Ducks (link here).  At least if we can spend some time in the field we might see them demonstrate their namesake.  These Sapsuckers will drill rows of holes – some deep, most shallow and squarish allowing for the sap to leak from the tree.  They then use their specialized brush tipped tongues to lap up the sap and any unfortunately insects that get caught up in the process.   There is probably a Michael Crichton dino movie in there somewhere. 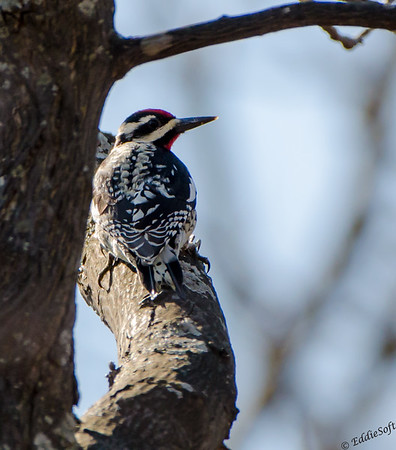 The good thing about this Yellow-Bellied variety is you have a pretty good chance of seeing one as long as you live or visit the eastern half of the US down into Central America.  They do tend to push north and further west during the breeding/migration season so our friends to the North have a broader span to see them.  All the specimens here were found in either Wisconsin, Kentucky or Illinois from 2014 to 2017.  I grouped them in this single post primarily because images from each of those years tended to show different features I wanted to point out in the post. 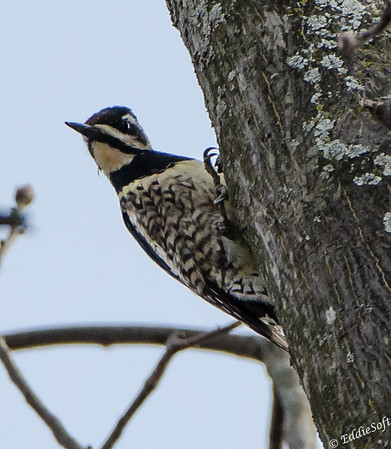 For example, the first couple of shots show the solid white patches on the shoulder/wing folds.  As a field reminder I refer to this as a brush slip while the white barring was being added to the back.  Both the males and the females sport a red patch on their forehead which is actually better viewed few shots below.  However, the males also have a rather vibrant patch of red on their throats.   See that red throat while away from the far western region of the US, you can be pretty sure it is a Yellow-Bellied Sapsucker.  If a female, you need to check off a few more features like the large white strips on the wings to complete the ID.  You can quickly tell the specimen in the shot directly above is a female compared to the male shots before that based on those features alone.

Just to close out the feather palette, they do show varying degrees of barring on the chest along with the dark chest bar below the neck.  Now, the yellow-bellied part can be a bit deceiving.  In the field I’ve noticed the yellow tinting on the chest/belly.  Some of them have a fairly dark yellow hue where others are much more washed out if not completely white.  Even when I do witness some yellow, the camera sensor has a tendency to eclipse it in favor of a more washed look.  The best chance of seeing it is really higher up on the chest directly below the black chest stripe (more to the sides).  Luckily the other features should get you the proper ID without having to rely on degree of yellow tint. 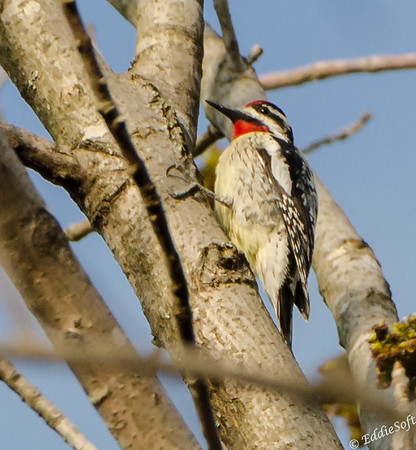 Not the best shot by any means, but the one above at least shows a visible hint of the yellow on the belly.  As mentioned, the shot below gives a good visual at the red forehead available on both sexes – please overlook the branch going right through the bird ugh.  My shots do not give a good read on this, but Cornell mentioned they will often raise the red forehead feathers forming a peak.  Promise to try and bring you that feature in future posts. 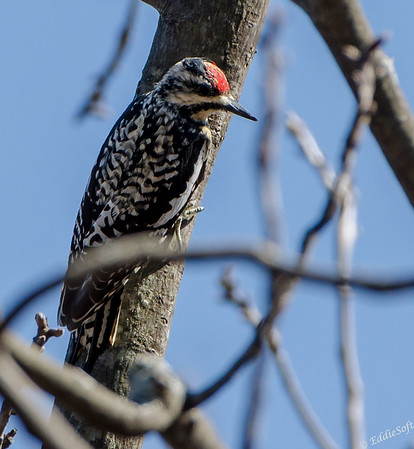 Coming to the end of my pictures, so better get to some interesting facts to leave you with.  Yellow-Bellied can be found in forests with a heavy mix of evergreen, aspen and birch.  Other creatures benefit from their sapwells and often leveraged by Hummingbirds and even Bats.  These are the only truly migratory species of the Woodpecker family as they will move south during the cold months – some heading all the way down to Panama.  Lastly, they also enjoy banging on metal signs.  Likely some form of mating or territorial display, these Sapsuckers will bang out their favorite heavy metal tunes for their adoring groupies. 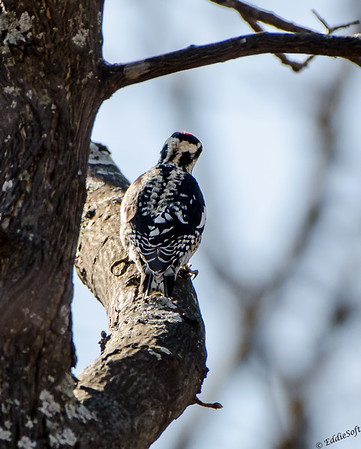 Good news, the fingers have finally warmed up.  Looking forward to a fun day tomorrow and need to get some rest so I can the most out of it.  Stay warm everyone!