Ever since the Crying fiasco (link here), I had been clawing my way back to running health.  Slowly trying to once again win back confidence from my internal heat controller which was now totally spooked since my first little training “mishap” back in 2014 (link here).  It took me several years to get my body over that heat related incident and now I was trying to do it again in less than 4 months.  The Bix 7 test (link here) proved conditioning was back for short runs (7 miles).  Being ready for a 30 miler back in July meant there was not a lot of stress to get through with the shorter miles – my training runs since getting back on my feet were rarely under 6 miles so extending it a bit more wasn’t that much of a stretch goal.  Now the IVS run was a better test and that turned out well (link here).  The final validation run before the big one was the Moonlight Miles race at the historic Oak Ridge Cemetery in my hometown of Springfield IL. 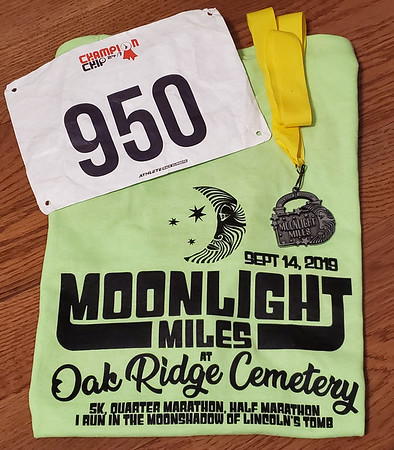 I have a history with this particular race and it isn’t a good one on the health front.  With the exception of last year, I think I have managed to leave my guts at the finish line (link here) .. and one year at every exit between Springfield and Peoria.(link here).  Don’t read that wrong, last year I might have kept everything down, but there were some brief moments of concern that I fought through (link here).   If there were serious residuals from  the overheat at the Cry or any gaps in the armor from under-training, it would rear its ugly head in this race for sure.  This is the starting picture of someone concerned as to how this was going to play out over the next couple of hours. The good news is they heeded my warnings last year and go rid of those damn ankle timing devices.  I bitched here how it had managed to cut my ankle up last year – this year they finally dispensed with that archaic device and went with the sensors on the bib – hmmm, maybe they read my blog ha!

Hit the jump to find out how the race went!

So, from a race strategy perspective, it was pretty simple – don’t drop, don’t stop and sure as hell don’t give Linda an “I told  you so moment” that would assuredly put the final nail in the upcoming redemption race.  Oh, forgot to mention Linda came down with me this year to make sure I didn’t convince my friends to lie to her if something did go wrong – “who me?”.  She also brought the RV down so I could relax before the race and have a place to lie down on the way back if my strategy failed – yes, she knows me all too well.  One final reminder to myself to take it easy on the first loop and then the coordinator announced the start.  Whoever the masochist that changed this course a couple of years ago to start at the top of a steep hill needs to be subjected to 50 repeats on this same hill.  Sure it sounds good to be able to START downhill, but as soon as you finish gliding down it you realize you have to make it up that bastard at the midpoint and then at the end after traversing the never ending hills in the miles between.  Every year I see the broken souls standing at the base of the hill  looking up in horror.  I always offer words of encouragement and tell them to drop in behind, stay on my shoulder and I’ll get them to the top.

The first loop went really well.  I took in water at every opportunity and then decided to go ahead and try their sports drink at every other station.  This was definitely a downfall during the Cry failure as that race uses a product called Tailwind.  That stuff is awful and did not agree with me in the previous Cry race (thus stupidly skipped it to my demise).  I had brought my standard Gatorade Frost and planned to pick that up from Linda at the halfway point for the second loop. Moonlight uses a product from Hammer called HEED.  Took some at the second station as a test to see what kind of resistance the stomach was going to put up.  Made it to the next station without issue, took the planned water and since I was still feeling good, opted for HEED again at the next station.  I was completely amazed at how well it was doing with the stomach and I was feeling quite good from an exertion perspective.  I  did take a few drinks of the Gatorade at the halfway point, but decided it was okay to stick with the HEED for the rest of the race.  I passed the critical 8-9 mile mark which has traditionally been the point I start feeling really awful in this particular race.  The hills start wearing you down to the point you are dreading the large hills that you will face in miles 10-12.. not to mention the nasty hill at the end.  Rather than slowing down, I was feeling really good (well, in relation to the past – don’t get me wrong, this race will beat you like a dirty rug).  Eventually made it to the last hill and spent everything I had in the tank to sprint up it.

This is the look of someone that has taken everything this hilly half marathon has to offer and still standing. 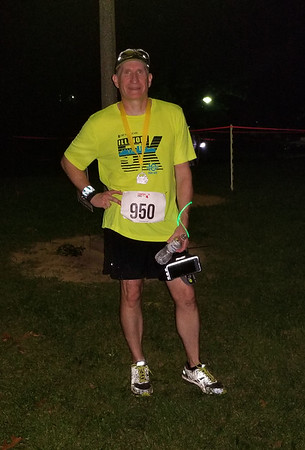 There was some timing issues coupled with someone being listed as the wrong gender (Cary Weaver was originally listed as a female) which screwed up all the division scoring..  Kudos to Sydney who owned that course.  My 2:09:51 was longer than last year (1:58), but that course ended up being short due to course confusion from the coordinators who told us to go the wrong way).  In the full course the year before I came in at a horrible 2:19:43.  The main thing is I felt really good compared to those previous runs and purposely held myself back on the first loop so I could monitor my heat and endurance levels.

When all the timing issues were sorted out, I ended up winning my age group which was a full 10 year band unlike the usual 5 year groupings you typically see. Just to give you a feel for this race, the guy behind me came in at 2:58 (I missed 3rd male overall by ~4 minutes).

That result earned me a new piece of hardware (technically plasticware) for the running trophy shelf.  This is what someone looks like who has fully recovered form a difficult race with absolutely no issues on the stomach front.  Plus you always feel great after being rewarded after a difficult run.

After this race I was talking to Carey who I found out actually lives by Peoria as well and had heard about the race and decided to check it out.  Carey is a triathlete and as someone who likes to test their upper limits, I can assure you triathletes are on next plane level of crazy.  He is also an ultra-runner (already has a 100 miler under his belt so I was pretty much bowing down to his awesomeness).  Although clearly there is something clearly wrong with his mental state (ha), he ended up being pretty cool and we got to talking about the ultras and of course, my previous failed attempt at the 50K, I relayed how this is the first time I had opted for HEED and learned this was his first time as well and he was impressed as well.  I told him how I usually used Gatorade and that I… well, before I could finish my sentence he gave me a funny look and asked me to confirm that I used Gatorade.. “yep”… with a bit of hesitation.  He politely informed me that was not a wise choice in much shorter words – “That’s bad”.  Stunned, we had a long discussion and learned how absolutely horrible Gatorade is especially for the longer runs as it is a) full of sugar and b) actually dehydrates you if you take a lot in.  Holy crap – was basically being informed that some of my issues were probably self-induced.  Eventually said our goodbyes, thanked him again for the education and made a note to get on top of this when I got home.  For the record, he and his wife use a professional mix for their endurance hydration that has to come from a supplier – I am probably not at that level, but based on how good he looked at the end of the race, he knows what he is doing. 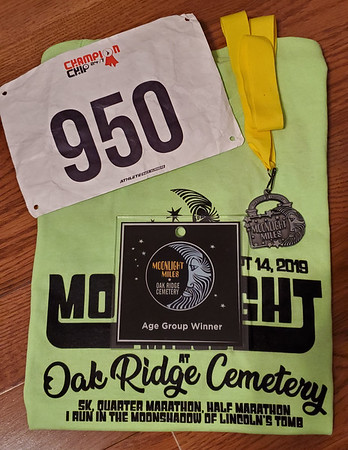 When I got home I found a container of HEED that I was given for winning my age group at this very same race a few years ago and simply stared at every time I opened the cupboard in favor of what I incorrectly thought was a better option.  Ever since that post race discussion I have been using Hammer’s HEED product on all my runs and I’ve definitely felt the difference.  Even told my Chiro about it only to get chastised directly for using Gatorade again.   Apparently I had never mentioned that to him before as he stated he would have made me stop on the spot if he had known that – am I the only one that didn’t know how bad that stuff is!?!  The good news is the final test before the 50K redemption went spectacularly well and now I had a much better hydration plan going forward.  Barring anything injury-wise in the final month of training, I was feeling good about my chances.  Stay tuned to learn how my second attempt at the elusive 50K went.