Some days turn out to be one of those where you wonder when it is all done if there is an ounce of energy left in your body.  Today was one of those days for me.  Normally, we would be putting on our annual Halloween Haunted Trail event tonight, however, with all that Linda has been through and for better alignment with my partner in haunt’s schedule we pushed it to next week – all I can say is thank god for that as yesterday we had a major storm rolled through that completely flooded out part of our trail system through the woods (60 mph winds, hail and buckets of rain).  Can’t imagine how sucky it would have been trying to get everything set up not to mention having to make our guests trudge through the mud.  Instead, today was dedicated to getting all the props built over the course of the year out of the basement (Linda put her foot down) and depending on how the weather went, start work on a new 24’x8′ bridge over an ever growing stream.  Thanks to friends helping out we were able to meet Linda’s demand in the morning and then we decided to wade through pooled water on the trail and get some work done on the bridge.  6 hours later we had the entire outer rails built (doubled up 2x10s to 24 feet as well as the inner cross supports on 2′ centers.  I bet my friends do not offer to help me out next year ha!  This is one of the rare times where I can count the number of muscles in the human body as every single one is screaming at me.  While I am letting the Aleve kick in decided to blast a post out – not to mention the chair looked really comfy. 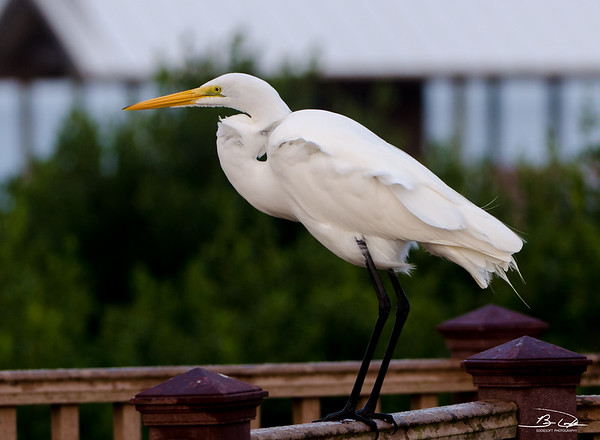 Last post I featured the Great Blue Heron – the big kahuna in the Egret family was feeling jealous – thus the green hue on the lores.  Nothing is worse than dealing with a bunch of slighted, whiny Egrets, “did you post yet, did you post yet, are you going to make a post on us, why are you such an Egret hater, did you post yet, I thought you were going to post, Egret discriminator, when is that post coming…”. It just keeps repeating until you give in and …well, feature them in a post. 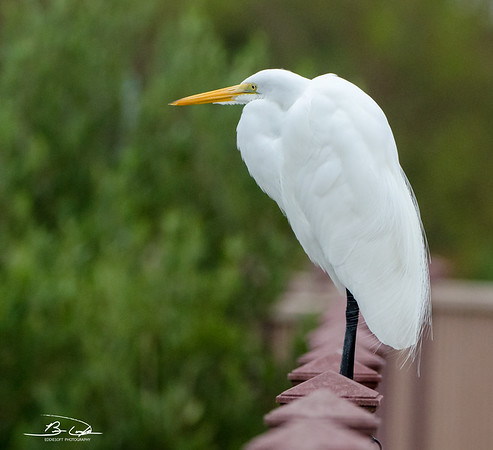 hit the jump to see a few more shots of this beautiful bird.

So, here you are, another series of the Egret’s answer to the large end of the Heron family. The Great Egret is another one of those birds that stands out at family reunions purely base on being head and shoulders above their other kin.  However, for those that do not have the opportunity to engage with these white angels very often, they can be confused with the similarly colored Snowy and the white morphs of the Great Blue and Reddish. 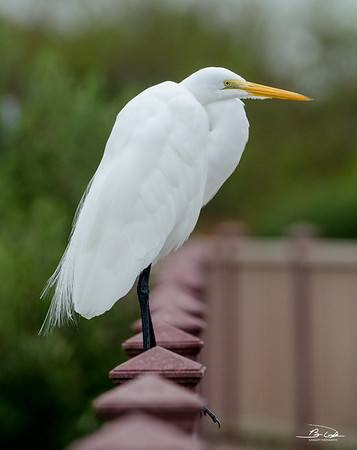 I can tell you I have never come in contact with the white morph Great Blue Heron, but I have plenty of encounters with the Snowy and thanks to our trip to Georgia (hear CJ is visiting there right now), I now know what a white morph Reddish looks like (link here).  Per the reference on Cornell’s site, the white version of the Great Blue Heron sports dull yellowy legs and a thicker bill.  Probably more telling is they are primarily found in southern Florida – all of the specimens here were found on the Texas Gulf Coast (specifically South Padre Island Birding and Nature Center for these first few). 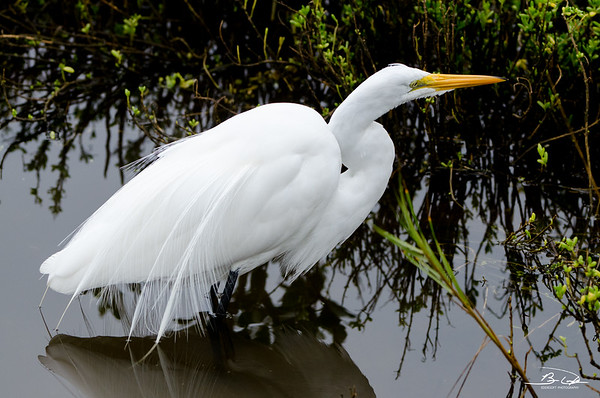 The white morph Reddish Egret is fairly easy to distinguish form their distinctive bill.  Like their more standard version,  their bill looks like it was dipped in an ink well versus the all yellow bill on the Great Egret.  They are also smaller and not as smoothly feathered, both of those characteristics are better validated when in proximity to an actual Great Egret.  That leaves the Snowy.  You will have zero problems distinguishing these in the field if you remember two things.  The first is the Snowy never goes out without its yellow galoshes (link here). Compare that to the Great which prefers to splash around without shoes. 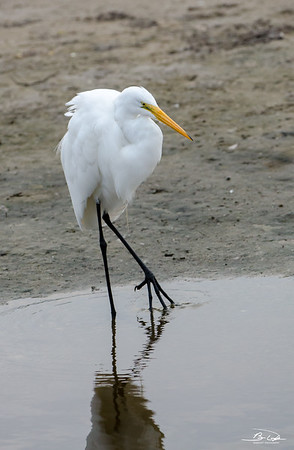 The second one is probably more useful as these birds tend to stand in water most of the time which makes it hard to see their feet.  Simply look at the bill.  See black, then you have yourself a Snowy.  If, instead, you see a pointed banana then without hesitation check the Great box. Note, the shot above and below were taken at Galveston Island.  I am always amazed how clean these birds stay even when walking around in the muck.  Contrast that with a vision of yours truly being covered in mud by the time we called it quits for the day on the bridge construction.

From a photography perspective, all of these pure white birds tend to drive you mad in the field.  Nothing to do with getting them in focus as these birds, like the Great Blue Herons, tend to stand motionless scanning the waters for prey to come to them.  If you have trouble getting one of these in the tin then I’d recommend going to the grocery store, buying your favorite piece of fruit, placing it on your kitchen table and spend the next 2 hours just snapping pictures of it while exploring your settings.  Once you figure out the controls, eat the fruit and head out to find yourself an Egret or Heron.  The part that will drive you nuts is getting the exposure right.  Every situation is different and your camera will not always react the same way due to the large number of variables involved especially with all that white.. 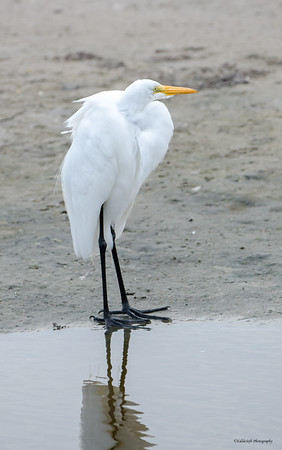 Ron will attest to the fact I am not a “chimper” when in the field – this is one of those times when I do recommend checking the shot.  You want feather definition and sometimes that involves setting your shutter a bit faster than you think to keep from blowing out the body.  One of these days I’ll get a decent shot.  Legs feeling a bit better now and the arms .. well, those probably will not come back before my training run tomorrow – might as well get  back at it.  Take it easy everyone – see you again real soon now.