Greetings everyone.  Seems like it has been months since I’ve been able to find time to pound out a post.  It has really been only about a week and half but my days have become longer than usual now that Linda is officially home and in recovery mode.  Although she is frustrated by the limited amount stuff she is able to do (both physically and under strict limiting from doctor’s orders), she is apparently able to do a lot more than expected based on comments from the follow up appointments.  Her cardiac rehab specialist couldn’t believe she was so soon out of surgery and able to walk into her office.  No surprises here, that’s my wife, driven to get back in the dog agility ring. Of course, this has forced me to learn new skills like something called “laundry” which translates to shove as many clothes as you can in the hole of the large metal box, pour the sticky stuff from the big white jug into a slide at the top and hit the brightly colored button.  Then there’s grocery shopping which as far as I can tell is to simply walk up and down every aisle and grab 5 of everything that looks yummy and then get sent back with an explicit list of things to get (while picking up even more yummy stuff).  Not sure about this cooking concept either – there are all these appliances and utensils scattered about the kitchen which probably all have some purpose, but not sure what, as the contents of the containers I bring from the various places on the way home all seem ready to eat just as they are.  Oh wait, I have kind of fallen in love with the metal box under the counter they refer to as the dishwasher!

Enough about my domestication as I know you are really here for the birds! 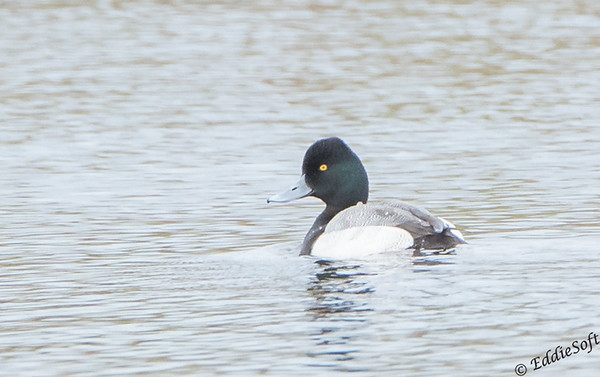 Hit the jump to read a bit more about this frustrating duck!

I looked at the post count and noticed I was short of the self-imposed quota with just a few days left in the month.  Looking through the post queue decided I would go with a bird … or more specifically a duck that I am pretty sure was put on this earth just to torment the hell out of me.  Not sure what it is about this particular species, but it refuses to be put in the tin without a settings struggle.  Too obscure (link here), too far, too blurry, too blown out, too dark (link here), too saturated (link here) you name it, I’ve successfully screwed it up with this Lesser Scaup.  Today we are covering the too blown out.  I should have brought these down even more than I did – didn’t want to lose what little eye detail I had.  The bright side of it (sorry for the pun) is there will be plenty more chances in the field to bring you back a better specimen.  Until then, you are stuck with this short series from our trip to Galveston Island back in December 2017.

The fact they took the time to name this species the “Lesser” likely lead you to quickly deduce there is a “Greater” version.  That would be absolutely correct.  Ironically, the Lesser moniker was not applied because of its relative regional coverage versus the Greater as it is more widespread, covering the entirety of the North American continent.  The Greater prefers to hang back from the southern portions.  As you would expect, the Greater is slightly longer and heavier although this distinction will likely not help you in the field unless you carry a scale around with you.  Luckily, there is an easier way to distinguish the two.  The Lesser has a small peak towards the back of the head.  If you are lucky enough to get an angle to see that spot you are good to go.  If you have my luck you are more likely to get the following view which will force you to get out your net and hold it down on your scale.

Let’s close with a few interesting facts that do not include any of my newly developed domestic skills.  The Lesser name again brings irony as it is the most abundant diving duck in all of North America.  According to Cornell’s site there is an established breeding population in the 3.8 million range.  Best I can tell, the Greater population is in the 800,000 range and classified in steep decline on the conservation rating system.  The smaller variety is quite the diver.  They can spend up to 25 seconds underwater and cover a very respectable 60 feet, which makes it difficult to predict where they’ll pop – what is predictable is they will assuredly be FARTHER away than when you went to take the shot ha!  Time to wrap it up, there are dishes to do (err.. put in the metal thingy).

Take it easy everyone, hope to see you again real soon.