Another race is upon me – tomorrow to be exact.  As mentioned in the previous racing post, I hate to go past 4 races before getting the recollections out.  You never know what might happen during a race and I’d hate to have you miss out on recollections thanks to me being in the hospital ha!  After the Allerton race (link here).  Next up was the standard Illini Marathon race.  Once again, I was signed up for the I-Challenge consisting of a 5K on Friday followed by the Half Marathon the following morning. 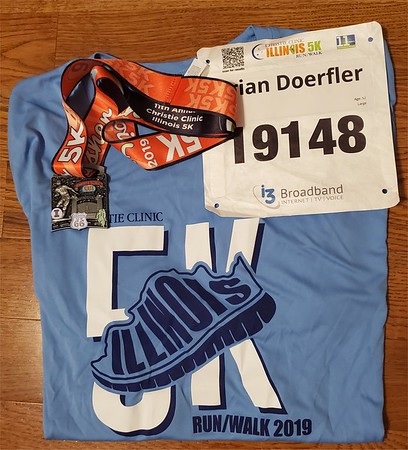 Since transitioning to Trail running, my enthusiasm for pounding out miles on the road has dwindled.  So many years of doing the same thing and now completely enjoying the new challenges of the trails dampened my enthusiasm for this race.  The good news is I already had a double race of the same distance under my belt so the body was physically prepared.  The mental part was the struggle for once again it looked to be another end of April crappy weather day. 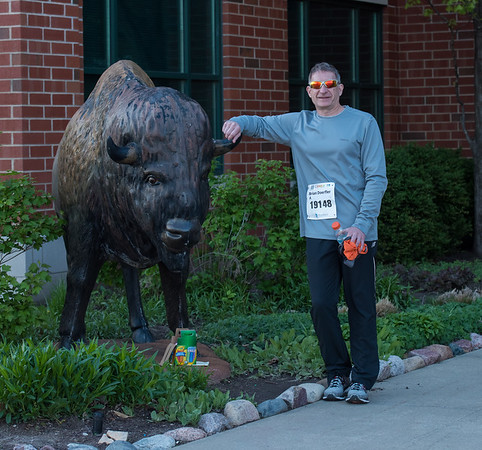 Hit the jump to read about how the race went!

Not sure what it is about this race date, but every year the forecast is cold, rainy and windy.  Runners can definitely deal with the cold, but running longer distances in the rain pushing against strong winds can drain you fast.  I’ll never forget the conditions I ran the marathon in – wow, that totally sucked (link here).  Up to the day before they were calling for rain for Friday afternoon and a whole bunch of it for the following morning.  As you can tell from the Linda obliged pre-race shot above, the sky was unexpectedly clear – happy for the Bison as it wasn’t able to seek shelter like the rest of us.

To be honest, the weather was absolutely perfect.  Definitely cool causing some mental strain trying to decide the required layering.  Opted for two shirts, but could have easily done with one by the time I crossed the finish line.  With the second race only a few hours away I would rather be a bit warm than attempting to get my body to stop shaking while warming itself up.  Looking at the pictures, cannot recall why I chose to go without a hat – maybe that was missed in the pre-race checklist.

Goal this year for the 5K … same as last year – DO NOT GET INJURED.  I was there to run the Half Marathon, not the 5K (as Linda likes to remind me “you shit 5Ks”).  If it wasn’t for the extra medal, I’d skip this night run completely as it is a bit risky.  Last year and I think even the year before that I pushed it too fast and ended up spending a worrisome night trying to roll out some serious knots before morning.  This year I told myself multiple times before the race and several times during the race to keep it under control. 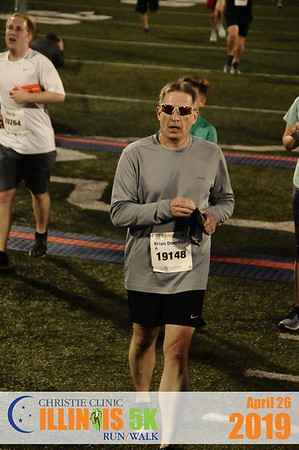 Those reminders came at a cost to my pride.  For the first part of the race two tuba (yes, that’s right, tuba) runners from the U of I marching band were ahead of me – passed one at the halfway mark, but pretty sure the other made it across the finish before I did – wait, I know one did because I remember the twinkle in Linda’s eyes when she told me I had lost to a tuba carrying runner – still not as bad as losing to the Oscar Myer Wiener or a Chicken (right honey!?!)  But yes, I as slightly humiliated as a result.

Other than that the race went to plan.  There was one slight issue that occurred about 4 tenths into the race.  I found myself in a wide pocket between those going out too fast (and actually caring about their time) and people who over-estimated their abilities.  I was enjoying the space and thankful that there wouldn’t be any newbs getting in my legs.  There was a 20 something woman a good distance to my left and slightly behind that I noticed out of the corner of my eye.  Likely Crossfit cult member – you can tell them easily.  Quick joke, Q: How can you tell someone doesn’t do Crossfit A: They don’t tell you they do Crossfit in the first 1 minute of meeting them … go ahead, laugh, no one is looking hehehehe.

I digress – So there I was just cruising along at a happy pace and all of a sudden Miss Crossfit comes diagonally right at me, nearly tangles up in my feet and proceeds to move slightly up and to the right of me which also happened to be the same lane another young lady had accelerated to get into from behind me.  WTF.  I was just about to give some slack thinking they were running friends, but they said about two sentences to each other which went something like “Hey did you know I do Crossfit?” followed by the other lady stating “I wasn’t sure there for at least 10 seconds”.  Then Miss Crossfit moved a few paces ahead. I was easily able to keep her pace staying 10 strides or so back until mile 2.  By then she was starting to fade and drift to and then behind me.  As soon as she noticed me, she all of a sudden sprints past me and re-establishes the same lead looking back at me to make sure she was ahead before settling back into her previous pace.

Okay, time for some running fun.  I ticked up the pace to purposely come up next to her.  She looked over to tell a potentially new victim she did Crossfit when she noticed it was me again and tried to accelerate a bit – which I matched and then slowly climbed pace just enough to let her competitive self try to match.  Let her catch up, up the pace a bit, let her catch up, up the pace a bit.  So enjoyable having something other than the actual race occupying my mind.  To her credit, this played out 5 iterations noting the expression getting more desperate each time – then she broke.  Chuckled to myself and then moved up the pace even more to accentuate the gap.  Still way under my normal pace so no threat there, plus by then the finish line was less than a half mile away.  Let the legs out  for the final push into the Memorial Stadium, enjoying the spring from the rubber under the AstroTurf and called it a night.

Legs felt good and luckily found Linda without much trouble allowing me to focus on some post race stretching as insurance against cramping.  My time was a bit embarrassing 25:12 compared to the 23:46 the year before, but that was by design.  If I’d known I’d be 7th in my age group without trying I might have been tempted to ditch the strategy for a chance at more hardware (who’s a medal whore?).  Stay tuned from the results of the Half Marathon.