Apparently some of you are tired of the bird after bird after bird posts as of late.  Note even the slight detour with an amorous Skunk would appease your thirst for something new or more succinctly stated by a rather perturbed correspondence “you know, your blog is called wildlife not birdlife”.  They definitely have a point so today I will try to appease the teeming millions and go with something in the cloven hoof category – a Killdeer!   … sorry, bad birding joke.

Don’t fret, I am making good on a real hoofed animal. 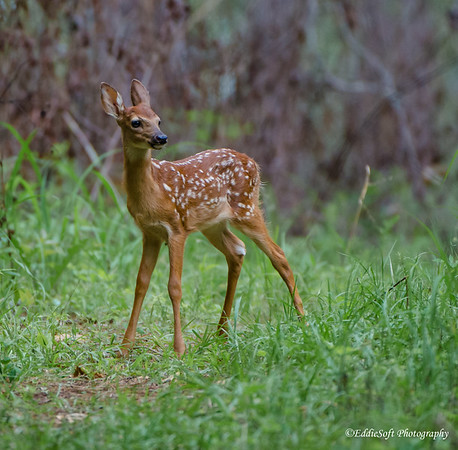 Okay everyone, say it with me “….Ahhhhhhhhhhhhhh”.  How cute is that!?!  Now some of you might have held back a bit knowing how destructive these animals can get when they mature.  Anyone who lives in the country like Linda and I definitely know their taste for flowers and gardens.  At our other house we enjoyed the blooms on the 100 tulip bulbs we planted for … wait for it … wait for it.. ONE day!   Then we had the pleasure of enjoying 100 bloomless stalks for the rest of the month.  One has even managed to completely destroy my first sports car (thank god for air bags and a lot of luck).  Even Linda has managed to tear up some fenders bouncing off them while they attempted to play Frogger.  However, when it comes to their baby stages, they are just plain adorable. 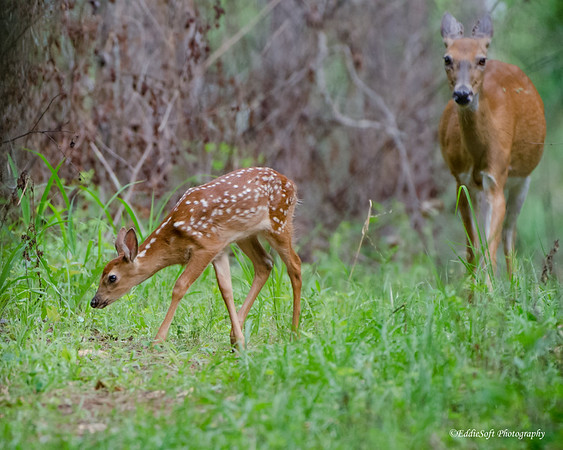 You usually do not simply come upon a Fawn out on its own.  Their mothers generally keep pretty good tabs on them and tend to shadow them just far enough that their offspring think they are braving their new world on their own, but in truth they are being watched very closely.  To be honest, mother is probably spending more time watching their surroundings making sure there are no predators around.  Sure enough, this Fawn was under a watchful eye.

Hit the jump to see a few more pictures (it will bring a cheer to your heart). 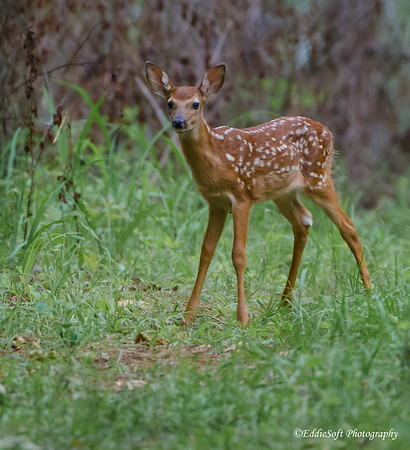 So, you might be wondering how this encounter came to be, especially given that Deer are so protective of their young and clearly not stupid enough to parade their vulnerable newbs in front of an apex predator Human.  She either clearly recognized me as a birder and immediately knew they were in a danger free zone .. or she didn’t see me as she followed her curious Fawn.  Definitely the latter ha.  While tracking down the images of the Scarlet Tanager from the last post, I found this set on the same roll.  I had completely forgotten my little encounter and immediately processed a few shots to share (great timing per all the anti-bird mail that was overflowing my inbox). 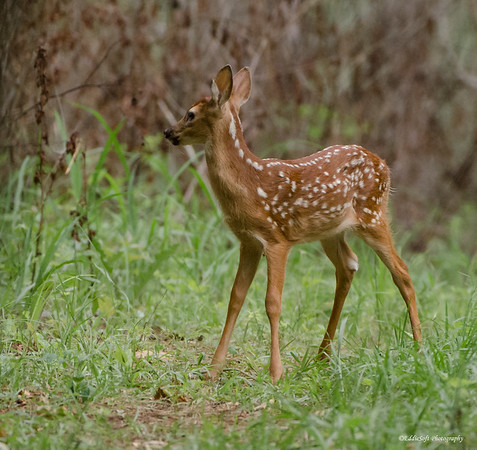 As noted, I discovered this Fawn while on our Georgia birding trip.  If you recall from the previous post, not really sure where this was beyond it being a wildlife refuge that advertised the Red-Cockaded Woodpecker (I will get you some day Red, I will find you).  Really need to try and figure out where that is, but not a lot to go on – one of the reason I try and take pictures of signage wherever we roam.   After taking the shots of the brief Tanager visit, I was heading back along the trail covered in rather tall grass.  I’m sure there were thoughts on how much Ron would have hated this path as it was clearly a tick haven.  The trail had a fairly steep hill on it and I had stopped halfway up thinking a flash in the corner of my eye was another bird opportunity.  After standing very still for a while (admittedly, the dominant activity when out birding), eventually deduced it was just a Yeti and turned back to the trail.  That is when I spotted a set of spots meandering towards me.  The hill ridge managed to obscure me enough not to startle the Fawn or the mom.  This provided a bit of time to slowly and quietly slink into the darker woods on the trail’s edge.  I managed to get several shots in the tin before the mother identified the source of shutter clicking, huffed a few times and took off back along the trail.  A few shots later and the Fawn figure out there was danger in the area as well – two shots previous was the moment it discovered me in the trees.  Now startled, it looked back for Mom (not liking the freedom now) – except there was no Mom. 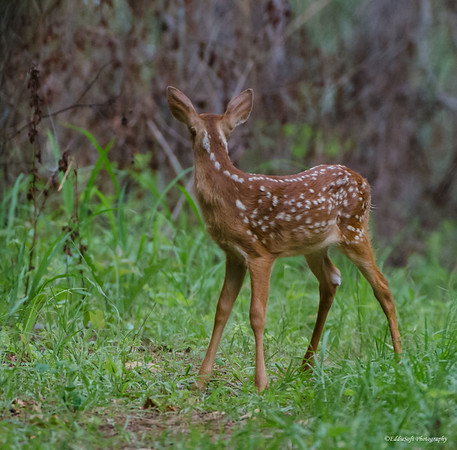 Then it took matters into its own hooves and went incognito. 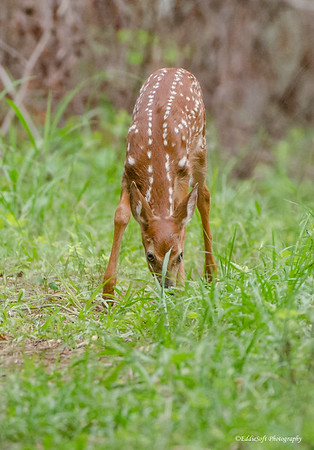 … or it was going in a different direction.  “Look at me, I’m a Lion and I’m in my uber-aggressive, threatening and about to rip your throat out stance”.  Either way it made me laugh.  Don’t be concerned, the mother was still there, she was just trying to distract me so I’d focus my attention on her and not her vulnerable baby.  I stayed put and let the Fawn calm its nerves a bit.  Mom made her way back up the hill, uttered a few more huffs and scratched at the ground a bit.  As much a show of aggression toward me as a signal for the little one to head back to safety.  Based on the fact I was the only other person in the refuge at the time and the ragged condition of the trails, pretty sure the local wildlife wasn’t used to bipeds.  I was just thankful I was able to give those deer something to write about on their own wildlife blogs.

Hope you enjoyed your time away from the wings.