In preparation for tomorrow, I did some digging in my out building, found a lawn chair and dragged it out to the middle of the yard.  Grabbed a pair of flip flops, a bottle of suntan lotion, cheap sunglasses and my favorite birding reference book.  Going to be some fun in the heatwave forecasted to hit sometime tomorrow…40F.  However, there are possible clouds and rain sneaking in for the afternoon through tomorrow night.  Needless to say, I’ll take it.  It might look a bit odd being surrounded by a foot of snow that is still lingering, but I “needz my vitamin D”.  In truth, I am skeptical it is going to get that warm with this much snow and ice about, but I will definitely be lacing up the running shoes and getting a few miles in snow, rain or sunshine.  It might be a bit sketchy on the footing, but it will help the soul to lift the winter blahs.    If nothing else, I can simply recall warmer places… for instance Las Vegas.

First a public service warning to those of you that might have adverse reactions to creatures with red eyes.  As with the previous post on the Cinnamon Teal, today’s featured bird also possesses a blood red eye.  Feel free to view the rest of the post through your fingers if that will make you feel more comfortable ha! 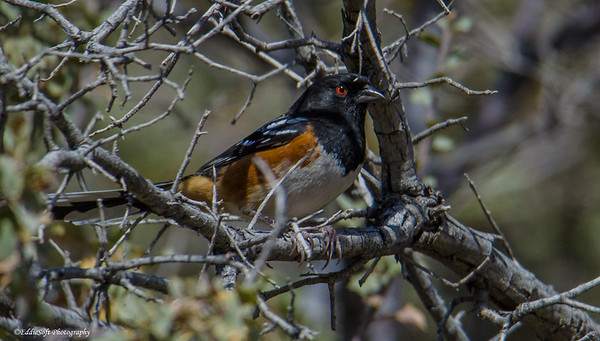 I was just talking to Ron tonight on how odd it is that so many birds have red hued eyes and I am not talking about the night owls squinting through strained eyes and hazy rooms trying to hit the big payout on the one arm bandits (another term that is becoming outdated with the advent of digital technology/machines).  We were wondering if it provided some evolutionary benefit, maybe better able to see at dark or perhaps provide better tracking of UV urine trails of prey (yes, some birds have that ability like the Kestrel) or perhaps it is simply a defensive mechanism – if I was a bird I would stay way the hell away from something that had red eyes – clearly bloodthirsty heathens – just saying.  Neither of us have a definitive response to the quandary which means I’ll have something to research while enjoying that lawn chair tomorrow.  If you happen to have some thoughts on red eyes feel free to let us know in the comments.  We here at Intrigued are thirsty for wildlife knowledge.

Short one tonight, but if you hit the jump, I have a few more words and one more image to share.

In case you are not familiar with this particular bird, it is a Spotted Towhee.  I heard it rummaging around under the brush while we were visiting Red Rock Canyon National Conservation Area back in November.  The Spotted Towhee hangs out exclusively in the western half of North America, year round on the western third with some migration further east, some scampering up into Canada and dipping into Central America during breeding.  Contrast that with the Eastern Towhee that is exactly opposite.  We are accustomed to seeing the Eastern where I live and fairly common to hear one while out in the field.  I say hear instead of see because these birds can be tough to locate.  They spend a majority of their time savaging in the underbrush.   This particular specimen was doing exactly that when I encountered him.  I was wasting large amounts of digital space trying to get a small and very hyper lizard into the tin.  Luckily Linda had already gone back to the car since she absolutely hates these “snakes with legs” as she refers to them.  I’ve had long talks with snakes that have decided to visit us in the country desperately trying to persuade them to make their way to the neighbors instead.  Will they listen …. no, next thing you hear is a blood curdling scream followed by a verbal abuse that would wake the dead.. directed at me for allowing this to happen – damn snakes never listen to me.  Sorry, I digress.  In the midst of snapping shots of the lizard something rustled behind me.  When you have big glass filled with lizard, you tend to get a bit jumpy under the suspicion it is all a distraction while the rest of the lizard gang tries to steal your wallet. 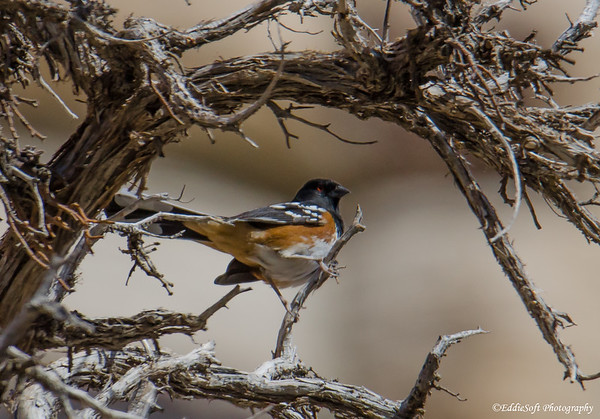 A quick look back revealed a flash of orange as it ran about the undergrowth.  Was pretty easy to deduce what it was, so the attention quickly changed to getting the Towhee tinned.  Up the rocks, down the rocks, up the rocks, down the rocks, in the brush, out of the brush, back up the rocks to get above it, back down to track it into another area of brush.  45 minutes and I still had not been able to get a single shot off.  Knowing that the ears were burning because of Linda and not the sun, decided enough was enough and turned my back.  Sure enough, that Towhee burst out of the brush and landed in a tree.  Just had enough time to get a couple of shots off before it move further into the brush.  “Really, is this the way we are going to play this!”  Apparently this specimen didn’t appreciate the tongue lashing as it popped back into view to give me a departing cold shoulder – Did get one shot of that smug face before it departed for good.  That’s three shots in the tin – time to go apologize to Linda – a little game we play, I get self-involved in birding, I apologize, she knows I don’t really mean it, she remembers she chose to marry me with all my many faults, all’s good (although I probably should not have mentioned that a lizard was involved).

The Spotted Towhee is not a new bird having featured one previously from a Yellowstone encounter and featured on the blog back in July 2008.  I looked at that set of pictures and absolutely cringed – so bad I am not about to even give you the link to it.  Always a good day when you can  improve on your previous work (which in this case was slightly better than an on the spot crayon drawing).  Sorry for the limited set of pictures in today’s post.  These Sparrows just have a knack for concealing themselves.  Cornell mentioned that some believe the spots help them blend into sun spots in the undergrowth.  At this point I would have to agree.  Now where are those swim fins …