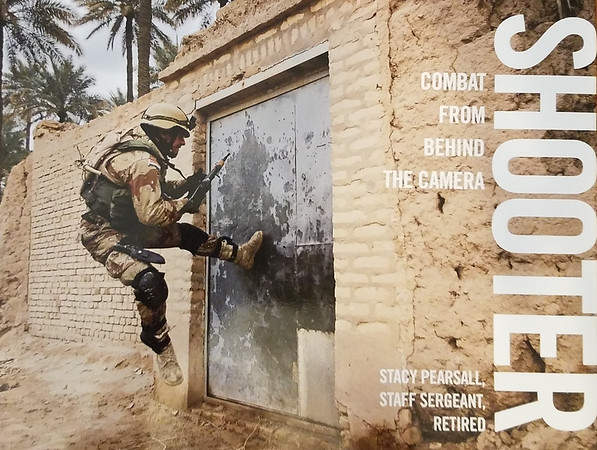 Decided it was time to finally start popping some items from the reading queue.  This particular book recollection has been staring me in the face for the last 6 months – yes, literally, it has been sitting 5 feet from my desk waiting patiently to be introduced to all my readers.  There it sat, passed over every day for something more important, left to collect dust alongside many other projects in a variety of finished states.  Fortunately for me, I am not easily shamed by my backlog, but rather embrace it as a badge of honor for all the things I do get through in a year (okay, maybe more like 3.5 years based on my photo backlog which is growing longer by the second).   Let’s go ahead and take care of this little bit of procrastination… still staring at me.

So, Today’s featured recollection is the product of Retired Staff Sergeant Stacy Pearsall.  Her work entitled Shooter: Combat from behind the Camera provides a glimpse into her career as a a combat photographer.  Oddly enough, a title also held by my brother Ron whenever he goes out in the field with Ticks, Bees, dive bombing birds and a particularly funny story about some harmless steers.  In contrast, Sergeant Pearsall was behind the camera while serving in the Air Force just north of Baghad in the very dangerous Diyala region.  I get stressed when we spot a new bird in a tree and try to quickly figure out the right setting to leave with an identifiable shot in the tin.  Sergeant Pearsall has to figure out settings while trying to keep from getting killed. Pretty much puts my piddly annoyances into perspective.  Shooter is a collection of her photographs taken in the war theater along with commentary about what it’s like to serve our country in this capacity.    Her photographs are a mixture of raw emotion and still point danger.  Page after page is filled with her vision, her viewpoint from the front seat of the war.  Thinking the military might be for you, want to see the world, then you might want to take a wade through time in her words a “worn torn apocalypse”.  After that,  give yourself a chance to reassess and make sure – still want to serve?  then you have my absolute gratitude.

Sergeant Pearsall noted that the Latin term photos translates to light and graphein means write.  This perfectly sums up what I thought of this book – the ability to write words with a collection of light that fell on her camera’s sensor.  As she puts it, the pictures she produces is the stand in when no amount of words will do.  She also leaves you with the chilling fact she might be taking someone’s last living picture.  Something to remember when you think your day is too stressful.

In summary, it is a quick read, but recommend taking the time to actually look at the pictures, imagine what it was like to be behind the camera and most of all, what must be going through the minds of the subjects at that very moment in time.  Thank you Staff Sergeant Stacy Pearsall, first for your service and second for sharing with the world your thoughts and photographs.

Hit the jump to see my takeaways: