I have used a specific quoted from a well-known photographer numerous times in this blog.  It is a bit in jest because Linda and I have listened to many of his blog podcasts and even had the pleasure of meeting him person thanks to a speaking engagement with our local camera club.  If you were into drinking games this would be a perfect situation where you get to choose what phrase they must down a shot to.  Sometime during a Rick Salmon presentation he will say some variation of “one blurry picture is a mistake, a whole bunch of them is a style”.  Drink up!  In the past post, we met Mr. Softie.  In this post you will also see Mr. Softie and well, by the third post on its way you are going to be thinking this is just my style hehehehe.  To my defense, all three of the posts in question probably covered a total of 5-6 seconds.  Incredibly relieved that enough characteristics made it to the sensor to be able to get a proper ID .. which means an official check on the list. There’s a lifetime of chances to get better pictures, but to be in the right place for the right second or two can make the difference of never getting the opportunity to make that mark.  Wife just hollered out to stop making excuses so better man up and get to tonight’s triple F (featured feathered friend). 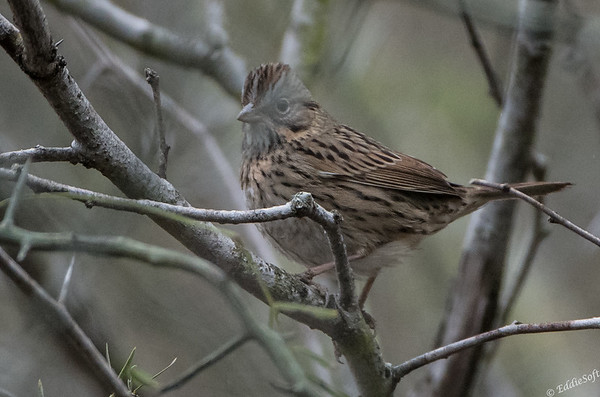 Hit the jump to learn more about this highly secretive Sparrow!

If you read my previous bird post you might be thinking – “that’s the same damn bird he featured last time – just in a different setting”.   Granted, the Sparrow family can be very hard to properly identify.  Luckily there are a few of them that are distinct enough to narrow down enough to ask for validation from Ron.  The Swamp Sparrow in the previous post had the rufous back coloring, the deep streaks and the buff sides of the breast.  In contrast, this Sparrow has kinda rufous coloring, deep streaks on the back and umm, well, uh well buffy sides.  See, completely different!  Actually, the legs on this Sparrow are significantly smaller, the overall coloring is more buff, sports more of a crown, has a smaller tail and the kicker is the long slightly broken lines.  It is really the latter that promptly put my nose in a reference book.  It didn’t take long to get this specimen narrowed down to a Lincoln’s Sparrow.  Apparently this species is extremely secretive, rarely making themselves visible, much less photographed.  The reference books recommended listening for their sweet songs – when they are singing, they tend to stay in the same place for a bit before darting back into the undergrowth.  Being as I was birding the southern tip of Texas at the Harlingen Thicket World Birding Center luck was on my side.  My camera was pointed at a Pyrrhuloxia (link here), when the Lincoln flew out of the thicket and landed about 10 feet away.  Had to back up a few feet to get focus, took a few shots and went back to hunting down the punk Cardinal.  Granted, there was absolutely no idea it was a new bird for me. 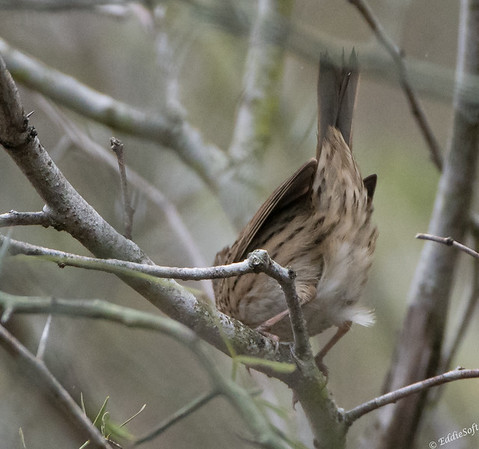 Let me get to a quick fact before I bring up something that might be a bit controversial.  As mentioned, the Lincoln is extremely secretive rarely leaving the safety of underbrush.  This must be the reason it took me so long to get into the tin even though it pretty much covers all of North and Central America at some point during the season.  Stealthy little bastard.  At least now I am familiar with its beautiful song so I’ll be more aware when one is around – chances are it will choose not to be seen.

Okay, now for a bit of the seedy underbelly of birding.  I was curious as to how this bird got its name being that I was born in the Land of Lincoln.  Maybe it was in honor of Honest Abe.  So to the net I went.  Quickly learned that it was named by John Audubon – THE Mr. Audubon all birders hold in high prestige having provided us detailed reference images of many birds.  If you are into birding, you know Audubon.  Cool, one more bit of information.  Reading on, learned that it was named after his travel companion Thomas Lincoln – there goes my guess.  They were on an 1833 expedition along the coast of Labrador and discovered the cute little Sparrow singing away.  Cornell followed up with the fact Thomas was the only one able to bring a specimen for study.  Hmmm, that raised some questions so went on a quest to validate a hunch.  Another place on Cornell’s site confirmed my fear.  Per Cornell, this is the quote from Audubon when they discovered it “but if the view of this favoured spot was pleasing to my eye, how much more to my ear were the sweet notes of this bird as they came thrilling on the sense … it was with difficulty that we at last procured it Chance placed my young companion, THOMAS LINCOLN, in a situation where he saw it alight within shot, and with his usually unerring aim, he cut short its career. … Many were procured during our stay in that country.”  This telling, reminded me of the first encounter of the Dodo bird where the explorers were fascinated by it continuing to come back to the same spot allowing them to shoot more and more of them until the discovered flock was decimated.  I find it fascinating whenever I listen to someone lecture me about how a bird should never be disturbed, in fact never know I was even in its presence – this while clutching their favorite reference book oblivious to how they got their subjects to stay so still.  Don’t get me wrong, I have no issues with controlled hunting, we just need to understand our footing.

Sorry for the soapbox there.  Unfortunately, there wasn’t any other interesting facts available, but that is likely due to its elusive trait.