I cannot believe how far I’ve fallen behind on my running posts.  The Halloween event was all consuming for the last two months, but I’ve had run posts queued up since July!  There’s only one way to deal with this embarrassing output – hunker down and get’r done.  On the bright side of things, I should have zero problems with blog fodder this month (or next).  So let’s start at the front of the FIFO queue. 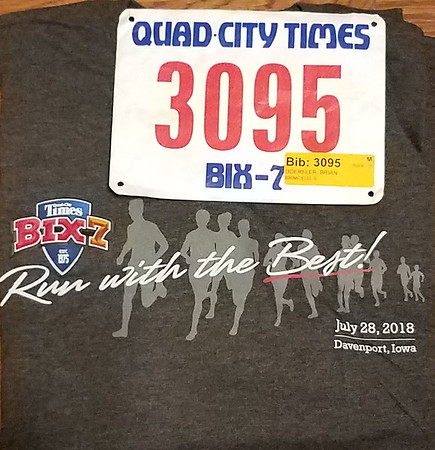 Yep, it’s another BIX 7 in the books.  If you are counting, that should now be 16 consecutive Bix 7 runs and also marks the 16th anniversary of my decision to take up running.  I mentioned this in last year’s post, but as a quick reminder, this whole crazy running thing start with a realization that my martial arts devotion was coming to a close.  The time between injury and recovery was getting too thin for my highly physical dojo.  That is when Linda made me aware of this hilly bastard from her hometown in Davenport, IA.  Ever since then, Linda and I have been lining up to conquer Brady Street hill

Hit the jump to see how the race turned out!

Now this race is always the last weekend in July.  If you live in the Midwest, then you know that means this race is always brutally hot and humid.  If the hills don’t get you, Mr. Heat Miser will beat you into submission.  This is why I was very skeptical when the weather experts predicted an unusually cold weekend.  This skepticism remained even when we woke up that morning to rather cool temps.  As you can tell from the picks, cool temps for July still mean a t-shirt and shorts.

This year Ryan ended up having a conflict with a charity race he participates in.  Sung has been fighting knee issues for most of the year and had limited training runs leading up to race day.  However, there is a strong pull to the Bix that has the ability to drag you to the start regardless of whether you are ready or not – more on that later.  While lined up in the Orange section (for some reason my picture of the bib in the first shot came out yellow), something caught my eye and made me laugh.

Made a mental reminder to check her times out and see if those socks helped her or not. If so, was going to jump on Amazon and pick me up a pair – unfortunately, by the time the mind made it past the 7 miles of hills her bib number was long lost.  Also lost was any thought of it being a cool tempered race.  Even while we were standing at the starting line the heat from the pavement was building up and the sun started to break through the shallow cloud line.  There have definitely been hotter Bix starts (one in the 90’s comes to mind), but any dip in the mercury is a positive.  By mile 2, any concept of a cool run had dissipated – the sun was out and the pavement was sending hot reminders on every footstep.  Was doing pretty good until I hit mile 5 which once again took its toll on me.  With the switch to trail running this year, my speed has dropped a bit, but my stamina and leg strength has improved.  Had to dig a bit, ratchet the speed back a few notches and plowed through the rest of mile 5 and then carried it to the end.   I few minutes slower than my fastest time, but still respectable given this course.

Congratulations to my wife as well who made it through another Quick Bix.  Still beating the hill even though they have dropped the Twinkie sponsorship which was truly her deep down motivation – Next year I should get a  shirt printed up for her “what big ass hill, I want my Twinkie”

On the other hand, you are probably wondering what gets my friend Sung to the finish line with minimal training – Two words – Whitey’s Popsicles.  Okay, maybe it isn’t just Sung that loves these frozen delicacies.  Food of the gods I say!  Just thinking about how tasty those are gives gentle reminders during the race why you put yourself through this.  I cracked up when I saw the following shot – obviously Sung had devoured his cherry cicle based on his ruby red lips – on the other hand I always go for the root beer variety – all the great taste with less staining hehehe.

I challenge anyone to find a better post race party than the Bix.  Add in Chick-Fil-La, bags of cookies, Debbie snacks and, of course, beer!  If only our local race coordinators would learn a thing or two from them – maybe they might start rolling in similar numbers of participants (17k+).  Oh, and DO NOT FORGET WHITEY’S.

As mentioned, the times were nothing to get too excited about – and really nothing to be ashamed of.  That first mile is a struggle to get a) up the hill and b) weave your way through the sea of other runners of which way too many are clogging up the lanes by walking or hanging in big groups of friends – very annoying.

.. and lastly, you can’t put a  Bix 7 in the books until you pose for the traditional post race shot.  Be on the outside, not the inside. 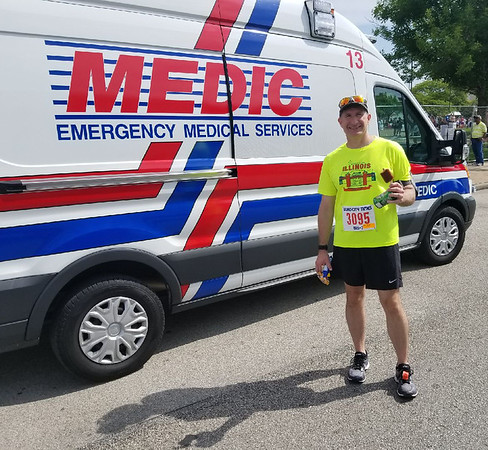 That’s a wrap folks. Almost forgot to mention the shirts this year were pretty nice – still tech cotton, but a least this year they went with a non-white color.   In the end, another shirt in the collection and another check in the race log.  Stay calm and run hills.

One thought on “Bix Cold Nixed”