I am always up for a challenge especially if it involves some physical form of activity.  My Life List chronicles a large number of those challenges all pretty much checked off since completing the full marathon a few years back.  With over 16 years of road running under my belt .. or should I say in my shoes, things were starting to get a bit stale.  That prompted a new List entry – trail running (link here).  Since I never know if a new endeavor is something that will stick or not, my standard operating procedure is to go big on the first one.  That way, if I end up hating it, I can at least say I came I saw I conquered. Turns out trail running is something that will definitely stick.  Some friends at work (the same one’s that told me about the Farmdale race) brought up another trail race that would truly test what I was made of.  Ladies and gentlemen, I bring you The Cry Me a River Half Marathon Trail Run. 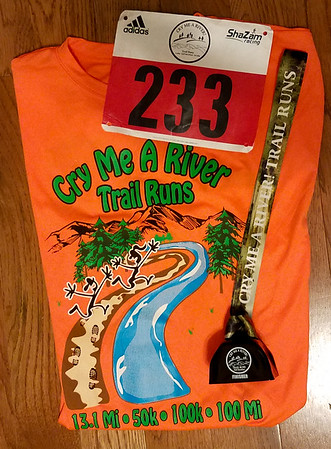 As you can tell from the interesting swag shirt (my favorite racing color by the way), the half was the SHORTEST race option they had that day.  They also provided a 50K, a 100k and the distance 99.99999% of runners consider the absolute insanity, the 100 miler.  Linda currently has a “hell no” status for anything at or beyond 26.2 miles.  Before going into this race I was probably on the same side of that argument .. more on that later.

Guessing you are not familiar with this race – yours truly wasn’t even aware it existed before a mere two months before the start of the race.  Hell, I’d just run 13.1 miles on a hilly nightmare of a  course, how much harder could it possibly be!?!

Hit the jump to read how this test of will turned out.

Answer: A HELL OF A LOT HARDER.  This course is absolutely insane. Let me quote from their website: “The 100 mile race will have about 23,500 ft of elevation gain.  No cry-babies allowed!”  Yes, the name of the race is a taunt to those who are willing to brutalize their body for fun.  It should also be noted that the 100 miler had a race time limit of 34 hours where the other distance racers were only offered 32 hours – to prevent you having to backtrack, that was “hours”.  Two days before the race, I received another “taunt” from the race coordinators informing us that the window was soon closing for any crybabies that wanted to drop their distance down.  Being at the shortest already, this left me the option of staying in my comfy bed enjoying that wonderful thing called sleep. 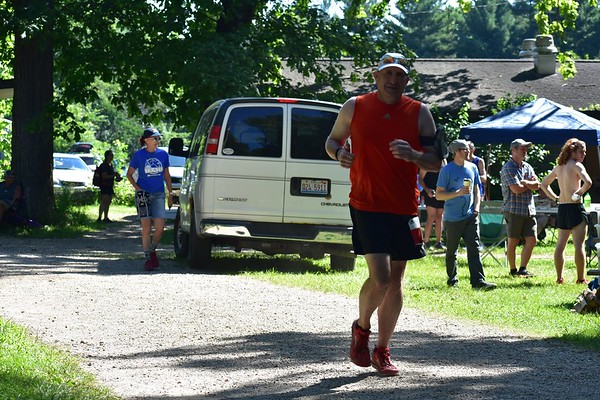 That wasn’t going to happen.  I had invested too much time training for this hellish event.  We had already planned our vacation a week ahead of the race (4th of July holidays), which meant at least two training runs while on the road.  Arkansas did their best to give me sufficient training courses – twice I had the luxury (check, PAIN) of running up steep mountains.  One of those was in Hot Springs National Park.  If you have been there, imagine what it would be like running up to their lookout tower.  That beast was only slightly steeper than the other mountain I had conquered two days before.  Both good tests of stamina – neither sufficient to properly prepare for the Cry course – not even close! 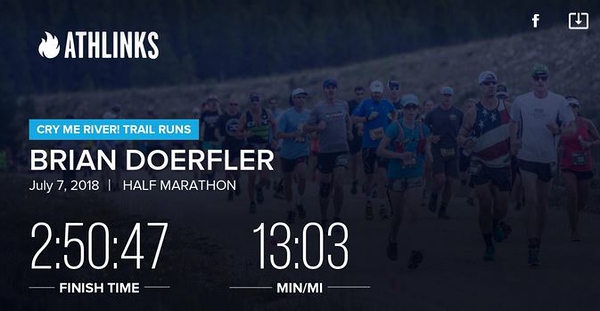 I’ll let you absorb my final stats for the race.  Another List item checked, another event that left an empty shell of a human.  On the road, I think I had run a personal worst of around 2:05 for a half.  That was due to total heat exhaustion that left me throwing up in the RV on the way home.  There is a race in Springfield that keeps owning me, but that is more of a hybrid half road half trail all hill course.  Then I ran Farmdale and think that came in around 2:20 eesh.  Now compare that to the stats above.  Stats do not lie, this course is tough.  The hills are so steep you have no option but to walk up them.  Even coming down them you have to deal with loose rocks, trenches and even landscape steps when it’s too steep to even walk.

The only thing in my favor was the heat wave took a break and the temps dropped to an average of 80 (was 95+ on my Arkansas training runs).  Hate to think what the time would have been like if that heat had stayed around.  For those familiar with the area, the half course consists of a loop around Camp Wokanda’s hills and then a trek through the hills and valleys down to Green Valley and back.  Pretty sure I would not be able to figure out this course without the markers.  Probably my only beef with the race is the limited confidence markers they had put out.  At one point a young lady and I were not sure which direction to go at a T.  Our guess ended up being correct.  By the way, that lady was the same one I had inadvertently scared on the Farmdale run.  She was supper appreciative I was leading the way for her first time as well and was hoping I would lead the way back – she ended taking off without me as I needed a couple more minutes to remember what my name was.  She did give everyone a chuckle when she stated “I need you to help me get back.”  The guys standing around had already recognized she was significantly younger than me.  They were trying to figure out what a male cougar would be called – my response “Creepy” which gave everyone another laugh.

I was never so glad to make to the end of the race.  I had nothing left and probably close to feeling the same as I had running the full marathon.  There wasn’t much fanfare as the few that had made it in before me were lounging around in chairs they had  brought or a small set of bleachers.  Besides, the longer distances still had a loooong way to go.  The good news is I finished 10th overall and 8th of the males and 2nd in my age group.  First place in my age group had me by a solid 10 minutes.  The bad news is they didn’t give awards to age groups – no hardware to show for some serious exertion.  Fortunately, just completing this course is a feather in the cap.  Not sure if it was the mental drain or the fact it was still a lot of “fun” to be challenged like that, but I already told Linda I’m going for the 50K next year!  Who doesn’t want a 50K sticker on the back of their truck?

Later everyone, need to get back to my Halloween decoration building – stay safe!

6 thoughts on “No Tears, but Definite Pain”