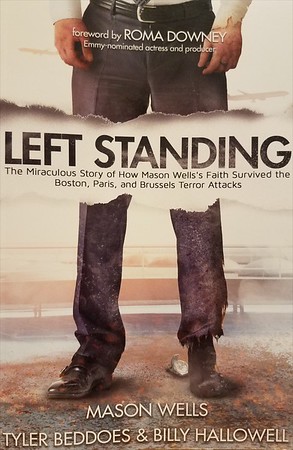 It may not seem like I have been reading a lot purely based on my blog output as of late.  Truth is, I have been reading a lot, just having troubles finding time to actually write about it.  There are actually three books that have already been read just  sitting on my desk waiting for me to take the time to write up a recollection.  That isn’t even including the featured book for today’s post.  The main reason this one is ready is thanks to it being a dog show weekend giving me some down time to write up the takeaways.  At this rate, thinking the others might make it sometime around, oh well, let’s go with October.  Featured today is a book Left Standing: The Miraculous Story of How Mason Wells’s Faith Survived the Boston, Paris and Brussels Terror Attacks by Mason Wells, Tyler Beddoes and Billy Hallowell.  It is a bit of a departure for me.  Although it is a book that focuses on the evils that exist in the world.  Okay, that part isn’t the departure point, but this read was about how faith allowed Mason Wells to come to terms with being either near or directly involved with three terror attacks – the Boston Marathon bombing, the Paris terror attack and in the middle of the Brussels airport bombing.  Think I heard about it from an interview Hannity did with the author.  Sounded interesting enough to spend some time with it (around 160 large spaced pages made for a quick two night read).  From a summary perspective it had a bit more on the faith element and less on the terror survival aspect that I would have preferred.  From a survival perspective, he was technically at or near the Boston and the Paris attacks, but surviving feels like a stretch.  Now, the Brussell’s airport, no doubt about it.  He was severely maimed in that ordeal being at the heart of the blast while standing in the check-in line.  This left him severely injured requiring seven surgeries, three hundred stitches, two hundred staples and several skin bandage changes   All of this and he was still able to deliver on his childhood dream of entering the Naval Academy and serving his country.  Always admire individuals who overcome adversity and reach their goals (one of the reasons this book sounded intriguing).  Turns out Mason was at this tragedy while on his missionary work for his Mormon faith.  Through all these trails, Mason believed his God had a plan for him and he accepted and made the decision difficult decision to follow it.  The stunning aspect, it is his faith that allowed him to forgive those that perpetrated these acts of barbarianism.  For this I’ve determined that Mason is truly a better man than I.  If there is one fault that I readily admit to, it’s my lack of compassion for those that want to initiate harm upon others.  My “bad list” are well known by those that know me – make it on that list and you might be able to make amends to get off, but you will never be forgotten.  Hard pressed to believe that turning the other cheek is the appropriate response when it comes to terror.  There are instances when you just need to cut the cancer out.

Hit the jump for my takeaways.

2 thoughts on “A Better Man than Me”