Thinking by now my bird averse readers are absolutely fed up with all the bird posts this month.. hell, this year.  Admittedly, I’ve definitely narrowed my post themes significantly and for that I apologize – at least to those of you who prefer your birds on a plate with garnish and a fine wine.  To my credit, I have thrown in a few wildlife posts that didn’t have wings along with a few recollections.  To help right the ship, let’s give some respect to my Alma Mater. 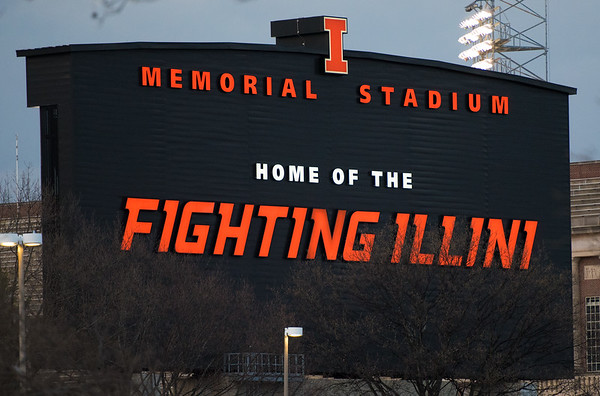 Unfortunately, we’ve been subjected to some pretty horrific sporting years as of late.  For the record, I am withholding all donations to the U of I (and my ticket purchases)  until they get their sports straightened out – p a t h e t i c.  However, I must give complete kudos to the race coordinators for the annual Illinois Marathon. 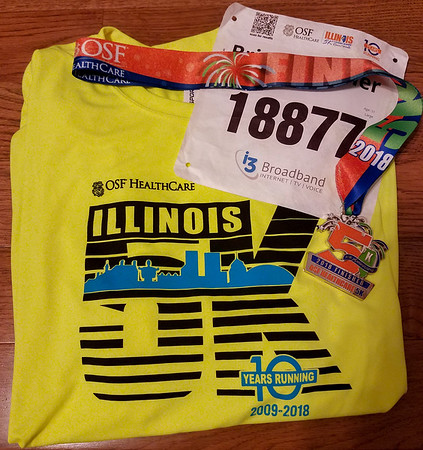 Hit the jump to read more about the race!

That’s right, April brought with it the start of the 2018 race season.  For a number of years now, I’ve been choosing to start the official season by toeing the line the last weekend of April.  Although I have done the I-Challenge Full, consisting of the back to back 5K and then the full marathon, I’ve dropped down to the I-Challenge Half for the last couple of years which is also the back to back format, but along with the 5K you pair with a half marathon instead.  Linda has put her foot down about doing the full again, but I am confident I can wear her down and will be taking on the signature race distance in the coming years (fingers crossed).  To keep the length to manageable size, opted to focus on the 5K for this post.  Adding flavor to the race this year was the Midwest twist of running with the bulls.

Telling you, nothing keeps you moving like knowing you’ll be trampled by a 500 pound Bison.  Unlike those Spanish bulls, our Bison are quite neighborly before the race.  This one was name Bronzy – note, I did ask if  it could come home with us and once again Linda put her OTHER foot down and denied me my pony.  He looked a little parched so I offered it some pre-race energy

Linda did agree to be my personal race photographer again this year (yea!).  First thing to note, is the clothing.  It is tradition now for it to always be cold and rainy for this race.  It is quite uncanny how regular it is.  This year turned out to be perfect weather for the Friday night running of the 5K.  Somewhat cool with a small amount of overcast to keep the heat out.  I honestly cannot remember ever running this race with just a standard tech t-shirt and shorts.  Based on looking at the faces of everyone else, I wasn’t the only person enjoying the racing conditions.

As a side note, the kid to my right is wearing the race shirt for THIS race.  Always chuckle when I see this – a violation of my golden rule – “Earn It Before You Wear It”.  Oh, and in case my running friend Pakage reads this, that goes for the medal too hehehehe. Note, another rule breaker in front of me in the next shot.

The goal this year was to not repeat the mistake of last year.  Last year, it was nice and cool and I got caught up in the perfect conditions.  Ended up going really hard and running one of my fastest 5K’s ever.  The downside is I cramped up like a mo…ose almost putting the half marathon the next morning in jeopardy.  This year, keep it under control and save the legs.  I ended up pulling it back for the most part, but did end up still pushing more than planned.  Came across the line in the 24:30 range. 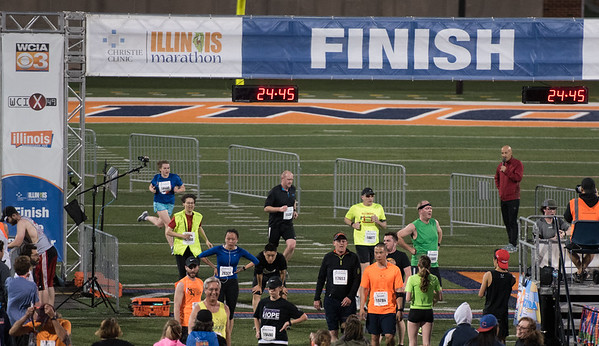 Felt okay for the most part, but then had the same problem as last year – couldn’t find Linda.  That delay last year caused my calves to seize like baseballs.  Took all night to roll those out well enough to put weight on them the next day.  This time it didn’t take as long (but still longer than it should have been – bad Linda).  They ended up seizing up a bit, but they broke free after a bit of stretching – dodged a bullet. Linda did get my pictures crossing the line and then our traditional post race shot (unfortunately no ambulances around)

So the first of the two races was in the books and not much damage.  My final time was a very respectable 24:39 knowing that I had held back – breaking 24 would have definitely been achievable had I let the dogs run.

That pretty much sums up the first of the double races.  I did laugh when a small kid running next to me at mile 2 called out the “Frat Boys” in a condescending tone who were out drinking on their porch as we passed by.  Reminded me of my days as a proud GDI.

Stay tuned for the recollection of the next day’s half marathon.