Okay, so I kinda screwed up on my last post.  I’ve been going through so many new birds as of late, that I went lax a bit on my paperwork.  I made it all the way to end of my post completely under the illusion that the Yellow-Throated Warbler was new to the blog.  Granted, there was even a small pat on the back as I closed out the text for that post knowing the list counter was going to move.  If you recall, an official tick in the list requires a sufficient picture that reveals the key characteristics, validation of the ID from a trusted source (usually my brother Ron), processing of the image with upload to gallery and then an official blog post.  Definitely a bit of work and one of the reasons my official bird count is embarrassingly low.  My backlog is fairly sizeable – thus the extra push on new birds over the last several months.  The final step in the post is to set the tags. All of a sudden, my editor filled in the rest of the characters when typing in the name of the Warbler Whaaaaat!?!  Ugh, that clued me into a previous post which was quickly located from a Georgia birding trip.  Drats.

Decided to remedy that snafu tonight.  I can guarantee tonight’s featured feathered friend (Pat may I buy an ‘e’) 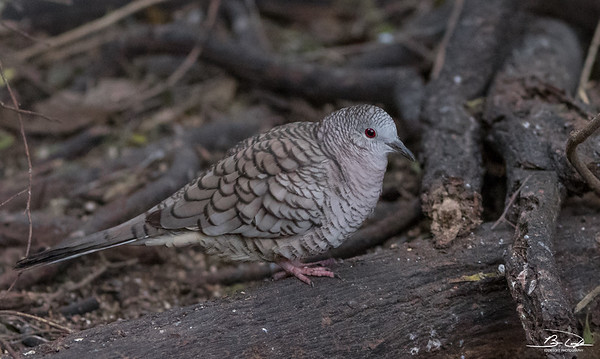 My Dove count is definitely starting to shape up.  Already featured on the blog are

Today, I am proud to bring you the latest addition to this list,. the Inca Dove. 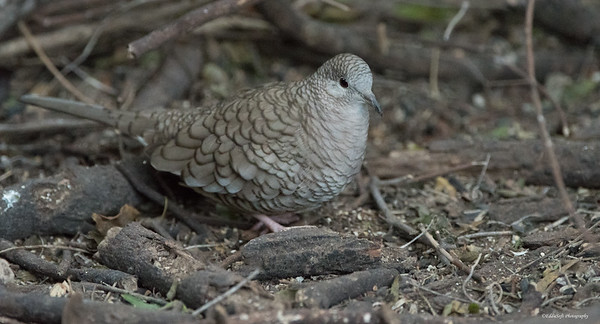 Hit the jump to read more about this uniquely feathered Dove

This specimen was discovered while birding the Valley Nature Birding Center on our birding trip to Weslaco, Texas last January.  If you recall, this is the same place that brought me the Clay-Colored Thrush (link here) and the recently posted Black-and-White Warbler (link here).   I have to admit, this is probably my favorite species of the Dove.  The feather pattern on these Inca’s are very distinctive with each feather being delicately outlined .  Almost looks like it was chiseled out of stone or maybe even covered in fish scales . 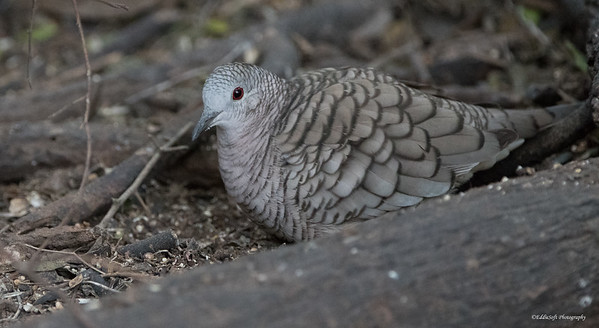 The other distinctive feature of this Dove is their red tinted eye.  You can kind of see that in the shot above, but the drab day didn’t give much opportunity to highlight that particular feature.  According to Cornell, their eyes can be a window into their soul -well, at least into their emotional disposition.  When alarmed by an intruder, their eyes will brighten.  By that gauge,  it didn’t appear to be concerned about my presence. 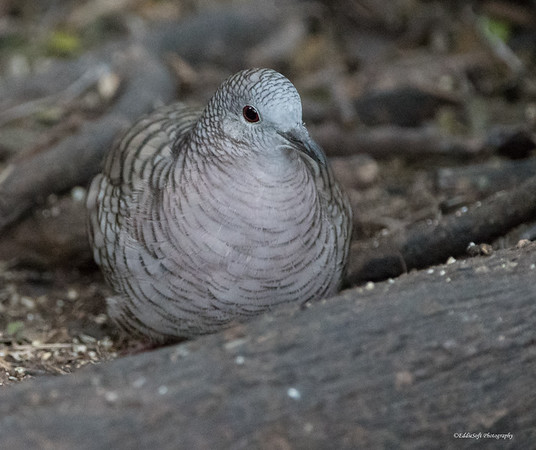 It did keep an eye on me, glancing in my direction from time to time to make sure I was keeping a safe distance – probably checking his grooming in the big glass.  These Incas have a very pretty pink/purple hue on their necks, creating a very subtle gradation of color as you travel up through to the top of head which is more light blue/turquoise.  Bob Ross would include plenty of “Happy’s” when painting this particular bird – likely sitting in a “happy happy evergreen”.  This bird has another distinctive color pattern I wasn’t able to bring to you.  Their under-feathers have a rich chestnut on them.  I did witness it as this one eventually took flight somehow navigating the thick underbrush which my glass couldn’t.  Opted to not show you the blurry mess that did make it into the tin.   Will leave you with a better shot of the back so you can see the feather outline continues all the way through the body albeit in a tighter pattern. 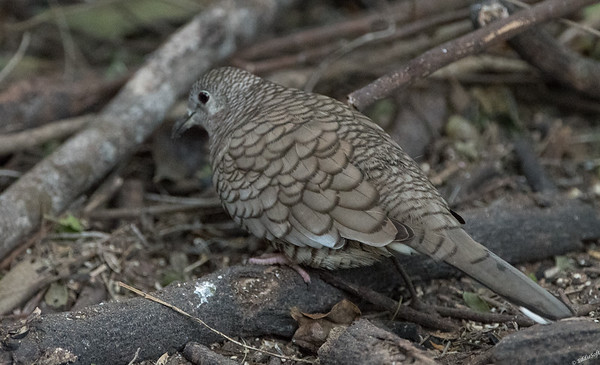 Just a couple more interesting facts before tying the bow on this post.  The Inca would not be the best motivational animal totem to choose.  Choosing a “life half empty” disposition, these birds have a cooing that sounds like “no hope”.  Poe should have picked this symbol for the embodiment of his depression and not stick that stigma on the Raven.  Lastly, these Inca’s do not like the cold – probably why they hang out primarily in the southern tip of the US and down into Central America.  When we were there it was certainly unusually cold (low 40’s), but didn’t get to witness any “pyramid roosting” – basically they will stand on each other up to three Doves high.  Something to look for the next time we bring the cold Midwestern air down to Texas with us (trust me, we heard about it from the locals the ENTIRE time we were down there).