If a +3 three weekend is worth celebrating, then surely adding another +1 for the week is worthy of a Snoopy happy dance.  I would do just that, but Linda is home and knowing her she’d sneak a picture of it and then post it on Facebook to all her friends. Then Facebook would probably mine it and start sending dance lesson opportunities.  It’s amazing when you pre-think through your actions how boring your life becomes.  Maybe this is the key difference between childhood and adulthood – The Embarrassment Factor. If had actually considered some of my actions when I was a kid, me thinks I would not have had nearly as much as fun as I did.  Granted, I would have had far less stitches and Tetanus shots ha!  This all brings me full circle to today’s post.  Linda is forever embarrassing me by retelling my reaction to learning that a Painted Bunting was hanging out at place we visited in Georgia (wait, hmmm, that post may not be out yet – ignore that if it isn’t).  It is this ribbing I take that has caused me to pre-think my actions when I learned this Hummer was hanging out at the Bentsen-Rio Grande Valley State Park near Mission, Texas. 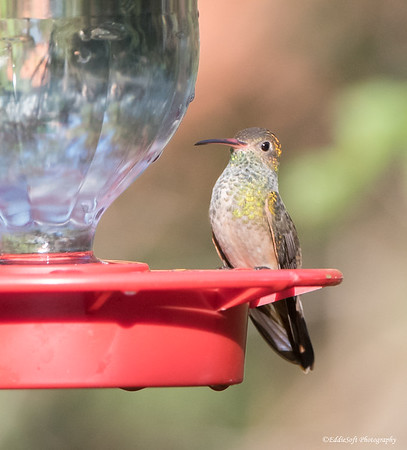 In a much more controlled manner, I calmly walked out of the visitor center and forced a restrained walk over to the specified spot – a feeder we actually passed on our way in.  Successfully prevented another embarrassing Facebook post, although my inner being was doing one hell of a Happy Feet rendition.  This was one of the new birds I was hoping to get in the tin on our birding trip last January 2017.  Here in the Midwest (link here), we are treated to only one kind of Hummer unless one gets mistakenly lost during migration.  I did pick a new one at the Henderson Bird Viewing Preserve – the Black-Chinned variety (link here).   Other than that, the list is pretty bare when it comes to these incredibly fast creatures. 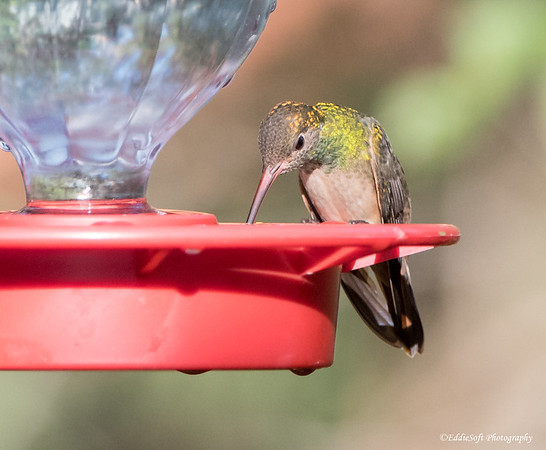 Hit the jump to find out more about this bird.

So this is a Buff-Bellied Hummingbird.  I led with these shots because they gave the best look at the key feature of these birds.  Primarily the dark tipped pink bill and the buff colored belly (let’s give a round of thanks to the official namers of this bird for giving us a helpful name for a change).  I should point out that I did mistakenly take a ton of shots of a Ruby-Throated specimen having mistaken it for Buffy.  It finally flashed the Ruby red for me – almost as if he was giving me “these are not the droids you are looking for” sign.  The second I began to wonder if I’d been deceived by a prankster ranger, The Buffy showed up to slay some nectar.  Nothing like getting the check on the list on the second to last day of the trip – but, there was more in store that day.  We headed over to the Estero Llano Grande State Park which close by in Weslaco, Texas.  A friends of ours (Carol) recommended we check that place out having visited there on her recent trip to the area.  This time I was able to get the Buff-Bellied in a more natural setting. 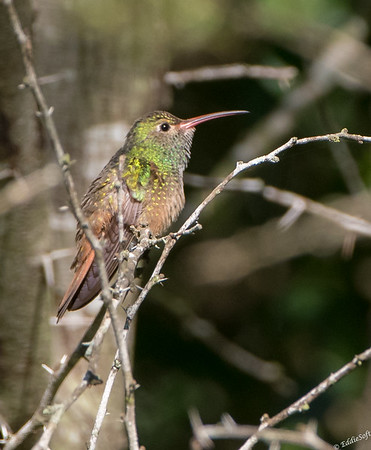 As mentioned earlier, this one doesn’t really show off the belly as much as the feeder shots did.  However, it does show the rufous colored tail feathers which were difficult to distinguish in the shots above. Unlike the Ruby, this Hummingbird has a much narrower region.  The Buff region is pretty much a ‘C’ consisting of the Louisiana/Texas Gulf Coast and then down and around the gulf side of the Central America.   Ron will have to work to get this deficit made up.   I would love to give you more insights on this new Hummer, but Cornell considers this species the “least-studied” of the Hummers that are found in the US.  I can tell you from my brief experience with it, this specimen definitely perched a lot more than the more familiar Ruby.  The one here from Estero would sit and stay there for 5-10 minutes allowing me to get plenty of shots in the tin – granted it stayed deep in the trees making unobstructed shots nearly impossible. 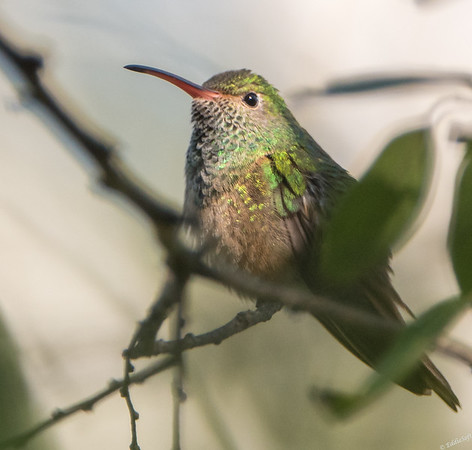 All I have for you tonight – have to get some shut=eye tonight for tomorrow’s final long run before the race season kicks in next Friday and Saturday (double race).  Hope you enjoyed my little friend.

One thought on “Buffy the Nectar Slayer”