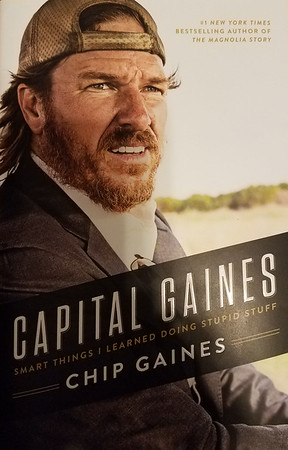 Whew, it’s been a long road to get to this point. As mentioned previously, my spare time lately has been spent running between the digital darkroom and wildlife posting with multiple side jaunts to the reference library. With the Audubon talk officially wrapped up, things are starting to get back to normal – well, at least a little more routine for me. Seems like something is always happening around here that needs attention. Unfortunately, a lot of that “happening” involves some fix or update to the house or outbuilding. This is likely why one of my guilty pleasures is watching the DIY and multitude of flipping shows – of course, some of that is a direct result of the rapidly growing number of entertainers that have earned their way onto my LIST (running out of channels that have anything I want to watch). One of the flipper shows has always stood out from the rest and appropriately named Fixer Upper. Chip and Joanna Gaines have managed to get me addicted to their show due to a mixture of interesting design, truly talented constructions skills and humorous banter. Not sure how, but I discovered that Chip had a book out that gave an opportunity to learn a bit more about his life, what makes him tick and hopefully gave some background on how the show came to be. That book, Capital Gains: Smart Thinks I Learned Doing Stupid Stuff quickly made its way into my Amazon cart.  Chip definitely gives some deep insights into the experiences that set him on his life course. From the shows, it was obvious he was into sports, so it seemed fitting when he told the story about his Dad being his baseball coach and how that led to playing for Baylor University (for his freshman year). At the same time he was cultivating an entrepreneur spirit which led to running 3 businesses which included flipping houses.

One thing you can definitely tell from the show is Chip is extremely positive. Definitely a glass half full individual that drips with self confidence and genuine compassion for his fellow man. From the exemplary parenting, obvious love for his wife and caring for his crew and customers, it is clear his life is built on a strong foundation. After reading this book, it is clear, this foundation is built from a strong faith. Chip and Joanna firmly believe that God has the ability to initiate direction and when that happens they are all in to get to that destination. Based on what they have been able to accomplish, I’d say this commitment has served them well. The Magnolia empire is thriving and their family bonds are some the strongest I’ve ever witnessed (the latter being an ever deteriorating aspect of our society). As an overall summary, this was a quick and uplifting read. You definitely get more background on his path through life and that wicked scar he sports on his forehead (he picked the image for the cover because it showed that feature). In fact, my favorite part of the book was his explanation on how he earned that scar complete with an absolutely hilarious hand drawn picture of the event – priceless. He also treats this book as a way to help the reader find the right path for themselves. There is even a section at the end to write down thoughts and personal assessments to improve your own foundation. If there is a downside, you really do not get much insight to the show other than I learned HGTV came to them to pitch the show. There also isn’t anything related to his skill progression in construction – I am definitely jealous of his “skilz”. Chip is an upstanding guy and I think that is why I enjoy spending time with him each week. The Chip you see in front of the camera is the same Chip once the camera’s stop rolling – definition of genuine. It is disappointing to know they are ending the show this year, but all good things come to an end and maybe God might nudge them back into the lights in the future.

Hit the jump to see my takeaways: