Happy Valentine’s Day everyone!  Linda and I had the opportunity to learn more about the International Crane Foundation tonight thanks to a guest speaker at the local Audubon Society chapter.  We are members of the ICF based in Baraboo, Wisconsin.  Linda discovered that place sometime back when investigating things to do while in the area.  About every year since then we have been making our way back up there to see how the Cranes are doing in their recovery.  Tonight we were able to learn a bit more about the site and pleased to see the Whooping Crane (link here) status is starting to look up.  Unfortunately, Linda nixed my efforts to put on the Crane suit the speaker brought showing how they imprint the young – someday I’ll get to try that bird suit on and post the pictures here hehehehe.  Big thanks to the Audubon Society for hosting that event.  Oh, and if you are in the neighborhood you might want to check out the guest speaker for next month – heard it might be on Texas Birding.

Speaking of Texas birding, how about this intriguing specimen.

If you live in North America and Central America, at first glance you might mistake this bird for the Mourning Dove.  That Dove is very common in those regions and wouldn’t be surprised if you didn’t see at least one a day hanging out in trees next to your feeders or hanging out with their friends on powerlines trying to choose which car they want to aim their white bombs at – based on experience this always ends up being the shiniest clean car they can find.  From a birding perspective, the Mourning Dove is one of those species that has become so common I generally do not pay them very much attention. Same goes for those water chickens the Coots.  I might take a few pictures of them just to help with the end of day count summary.  That is exactly what occurred while we were at Laguna Atascosa National Wildlife Refuge on our Texas trip back in January 2017. 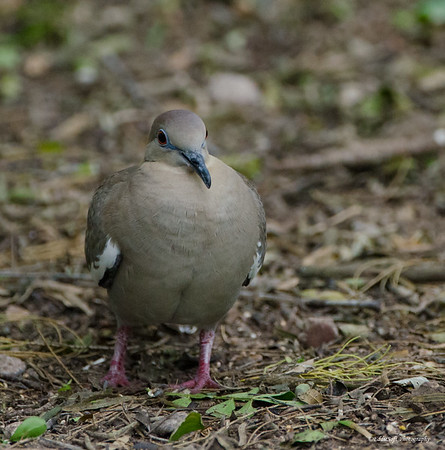 Hit the jump to read a bit more about this feathered encounter.

I had seen a few of the Doves sitting in a tree, took a few snaps and then headed down to the refuge’s bird blind.  While perusing a few of their pictures hanging in the blind something caught my eye.  There were multiple pictures of assumed Mourning Doves, however, there were different name plates associated to them.  Wait a minute, roll back the memory banks.  Started to scroll back through the images on the camera’s LCD.   Sure enough, the specimens taken on the tree had the same white edging along the wings depicted in the wall prints.  Luckily, the blind was empty or I would have been embarrassed announcing a new +1 out loud.  Not going to earn a lot of friends by giving away your fellow blind mates to the birds on the other side of the wall ha.  Those Doves were officially called White-Winged Doves.  Being a new bird, it warranted spending more time to get better shots.  No need to walk back to the first encounter, the specimen here was standing right out from the blind. 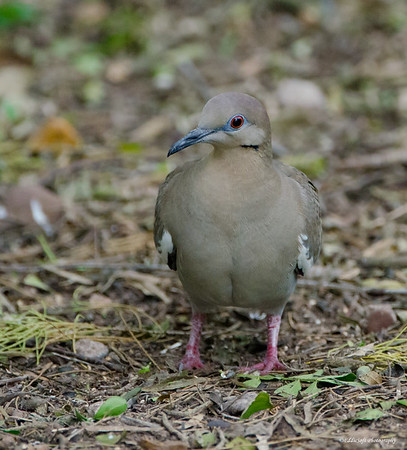 On the way back to the visitor center, crossed path with the original bird.  Having rudely dismissed the importance the first time, felt obligated to show it some additional love – no need to give a Dove a complex – especially when you realize their hatred for clean cars can be turned into a hatred for clean cameras!  “Move it along insensitive human, move it along”. 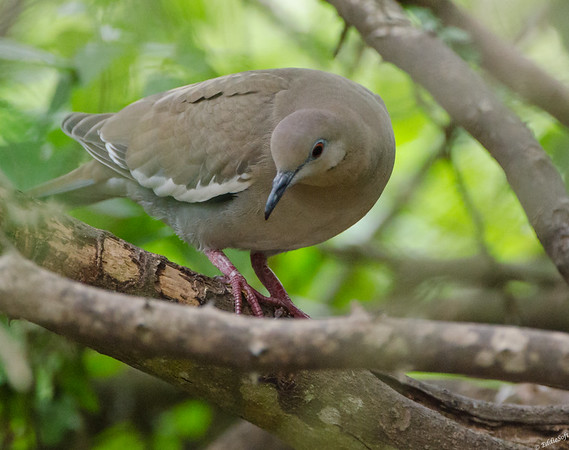 Armed with this new knowledge, it was quickly noticed in the digital darkroom that the true +1 came earlier in the week.  On a visit to Aransas National Wildlife Refuge, I had snapped other specimens.  Based on the fact there were only two shots in that sequence, clearly assumed they were Mourning Doves then as well.  So glad this was discovered while still having time to clean up the compositions.

Being a new bird, off to Cornell we go – WHOOOOAAAAA!  looks like Cornell has just changed the look of their site.  A vast improvement over their previous format.  The White-Winged prefers the southern tip of the US and down into Central America.  A few make their way all the way north to Alaska and Maine.  True to their kin, they can suck and swallow water without moving their heads which has to be the strangest fact I’ve ever read.  “So, stranger, what’s your bar trip?” “Well pardner, I’ll suck down that there sassafras without even moving my head.”  Lastly, if you are a Stevie Nicks fan, you should already be familiar with this species:

That’s all for tonight folks – I have a busy day tomorrow and I need to get that song (Edge of Seventeen) out of my head so I can get some sleep.