Merry Christmas Eve everyone!  Not sure if I am going to get around to posting tomorrow, so thought I would go ahead and put one out there today.  Finally feels like Christmas in the Midwest thanks to a lot of white stuff coming down at the moment.  Looks like 2-4 inches when it is all done for the day.  A perfect dusting to add to the holiday atmosphere – not to mention our well could sure use some recharging.  Today’s post is actually inspired by a recent set of pictures my brother Ron posted from his recent Florida trip.  He was able to witness and get in the tin the brutality of the Loggerhead Shrike. You have to feel a little bad for whatever creature crosses its path at feeding time.  I wonder if he would be willing to guest blog on that series of shots – think you would enjoy that in a squeamish sort of way.  .

In light of that, thought I would roll out my example of the circle of life.  Warning though, bunny lovers might want to skip this particular post. 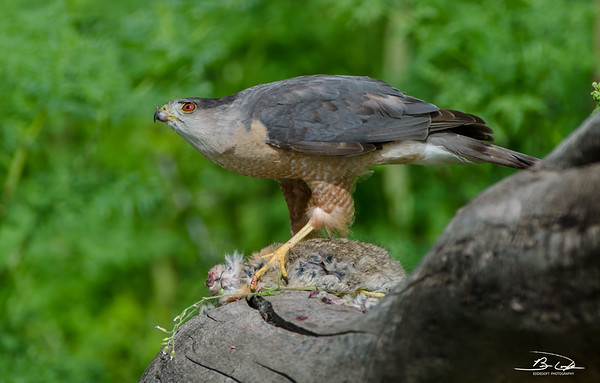 That there is a Cooper’s Hawk that I encountered while visiting Red Rocks Ampitheatre back in May 2014.  We were out in Colorado for a Teacup Dog Agility Nationals.  Linda knows how to bribe me to go with her.  Simply mention Red Rocks Ampitheatre and my bags will be packed in a jiffy.  I’ve posted a number of shots from my explorations at that place in the past.  A number of those were +1’s on the birding list.  Even got a nice fox while out there (link here).

From the birding list perspective, the Cooper doesn’t represent a +1 having posted most recently from an encounter in Champaign IL (link here). 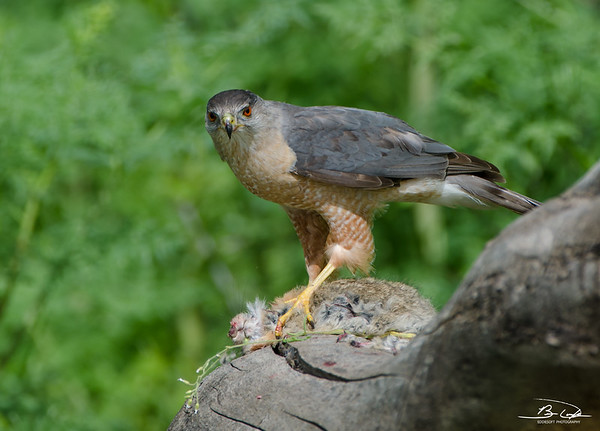 Hit the jump to see some more images from the Ampitheatre.

However, this is the first time I was able to witness the Cooper’s hunting skills.  I usually see it on the edge of clearings sitting in trees watching the ground intently.  I did have one stake out my feeders one day.  For some reason the intent escaped me as I busily went about getting a number of nice shots in the tin.  That was abruptly ended when it exploded at my feeders trying to grab whatever bird it could.  Remember being a bit stunned at how ferocious it was… not to mention fast and agile. That scene didn’t play out well for the Cooper’s.  There were so many little birds enjoying the seed that their mass escape caused so much confusion it looked like a mobbing. Don’t think it realized how many birds were sitting in the trees off to the side until they all took flight in the  hysteria. 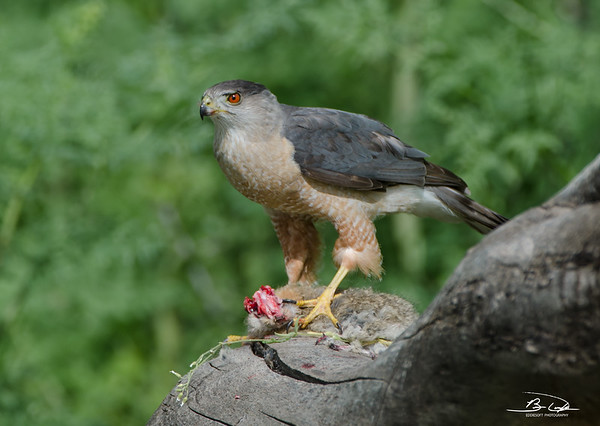 Can’t say the same for the rabbit in this scene.  While walking up a steep incline headed back to the visitor center, a large mass flew over me and landed on a nearby rock.  Took me a bit to figure out the silhouette as it crossed in front of the bright sun.  Once it landed and the spots cleared from my eyes it became perfectly clear that it was feeding time.   Impressed at the lift to weight ratio of the Cooper’s wings – that rabbit looked about as big as the Hawk.  Think the shot above is my favorite of the set with the blood red eye balancing the unfortunate victim’s current state.  You can also tell that Cooper was not going to let his prize fall off the rock – claws sunk deep. 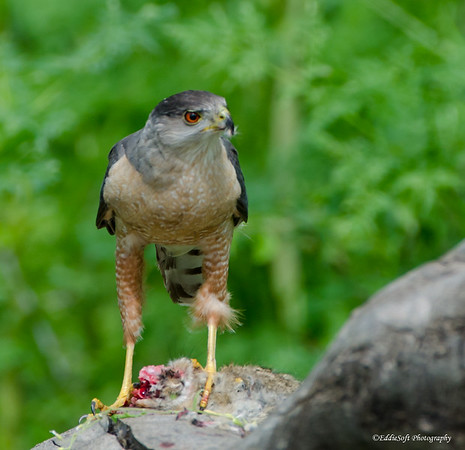 Not sure what types of competition abound in the area, but it was definitely keeping a keen eye on the surroundings.  Anytime there was a shadow crossing over or an unfamiliar sound it would check off the concern by looking up (see first image in the set) or move to investigate the source.  I was positioned behind a large boulder so it wouldn’t see me, but it probably heard the rapid clicks of the shutter.  Once the fears were addressed, it would simply go back to nourishing. 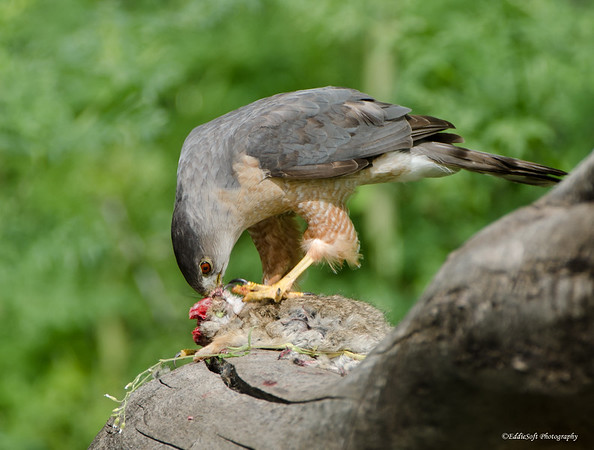 The natural circle of life can be difficult to witness.  Sometimes it turns out in the intended victims favor and other times clearly success on the predator’s part.  I contrast this with the standoff Linda and I (and the Makuta’s) were able to witness in Yellowstone several years back.  A pack of Wolves were trying their best to bring down an Elk that had taken to water for its last stand.   The Wolves were not willing to lose their strategic position and enter into the vulnerable water.  As a counter they surrounded it and were simply waiting for it to make a move.  In that particular instance, man interfered with the circle of life thanks to some stupid onlookers deciding they wanted a better view of the event and walked out to them.  This caused a concern for the pack and they retreated from the area.  The Elk ended up surviving thanks to the meddlers.  Unfortunately, as a Wolf enthusiast all I could think about was hungry cubs.  Ever since then I’ve tried my best to stay neutral on the topic and to the best of my ability to keep from interfering in the cycle.  It is tough not to get somewhat emotional based on your leanings – in this case I had just finished taking a nice set of shots of a very cute rabbit enjoying some grass on the side of the trail.  No idea if that ended up being the victim here although the timing is suspicious.  Note, there are a few times when I do need to interfere in the predator-prey relationship.  I can’t have the Coyote packs and Owls out here in the country eyeing my toy Poodles with bad intentions – if nothing else, Linda would never let me live it down.

Anyway, hope all is going well for you and it won’t be long before we are facing a brand new year.  Stay safe everyone.