Happy Halloween Everyone!  Oh, I seem to be a bit late on this one.  Let’s go with Nightmare before Christmas – yes, that seems much more appropriate.  I’ve taken you through all the new props and even walked you through the build process.  What I have not done is actually taken you through trail itself – well, at least give a glimpse of the experience.  There are too many decorations to take you through the entire trail, so just going to touch upon what we were able to capture before it was all tore down that night.  Thanks to everyone who contributed to the gallery.  We were so pressed for time this year that we didn’t get around to taking the camera through – next year hoping to have a 360 experience thanks to new technologies that are hitting the market.  Until then, we’ll go old school.  Not going to comment too much so enjoy the shots.

Paul’s giant pumpkinhead towered over the start of the trail – remember, the trail gets scarier as you go.

New this year was the Minion blow-up.  I picked this up for Linda since she is always referencing their memes.

Hit the jump to see the rest of the first half of the Trail of Tears!

Luckily all the trees helped block the winds from knocking down the blow-ups.

We got some comments that this decoration might have been placed a little early in the trail.  Seems it was a bit scary for the kids compared to the rest of the decorations in that part of the trail.  Maybe Paul and I are just getting too accustomed to the inherit spookiness of our collection. 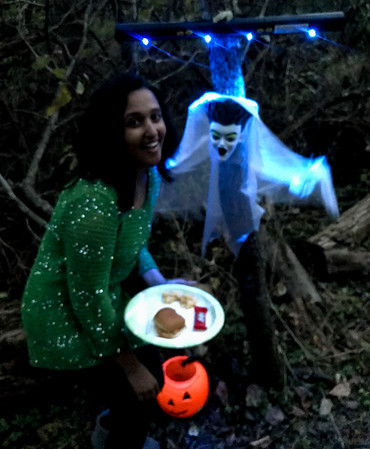 This witch was downgraded this year thanks to the ring of 5 (should have been 6) witches made their debut this year.  No worries, just means she has to move down the trail a bit.

Friends from work enjoying the trail!

Again, big thanks to Brad for a lot of the skeleton placements this year – I pointed him to the crate of bones and told him to have fun…. and that he did.

Howdy folks, nothing to see here, carry  on.

Guests who got lost in the woods while taking in the trail last year – probably should have sent out a search party, but I was pretty tired from taking all the decorations down, so went to bed instead hehehe. 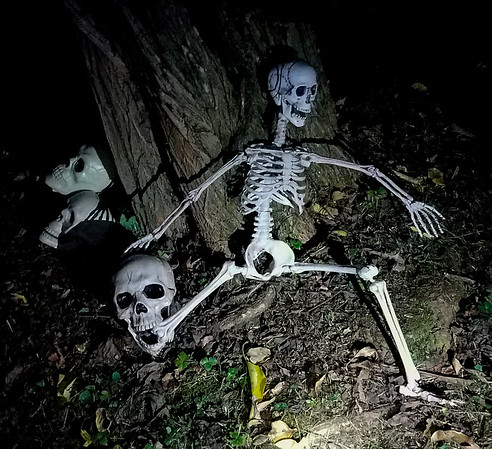 One of my favorite scenes from the night.  Man’s best friend in even in the afterlife. 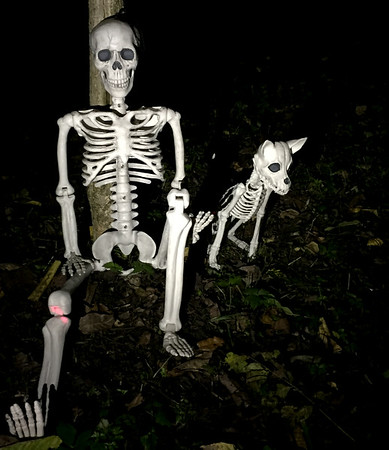 Them spiders been busy. 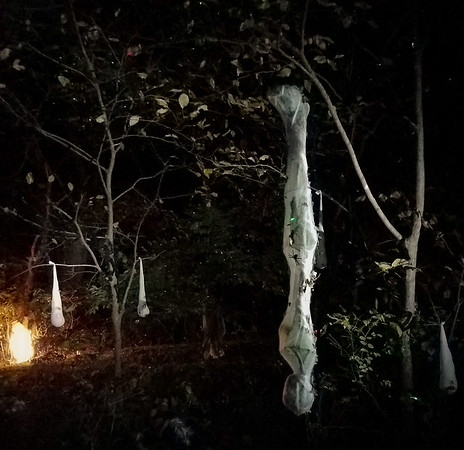 Found a clever way to deal with the trigger sensor on this 360 degree rotating decoration. 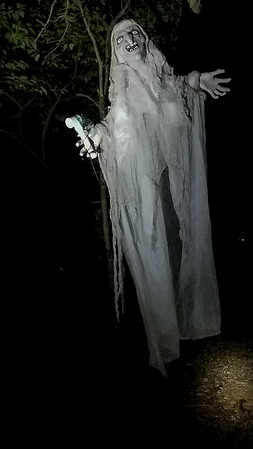 Bad dog, give my legs back now! 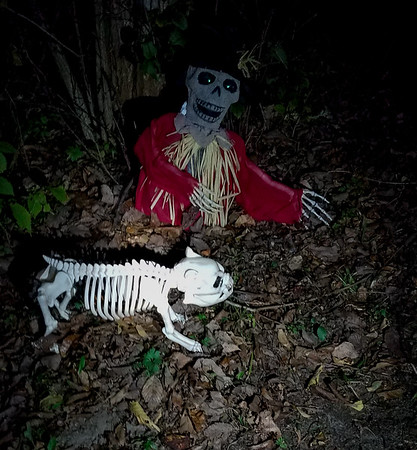 Come give grandma a hug 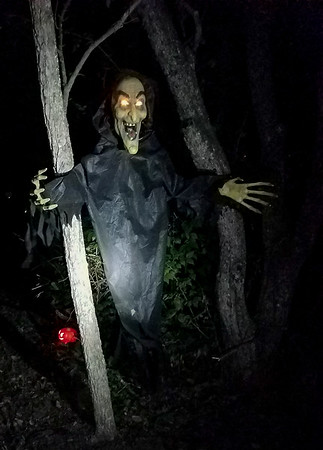 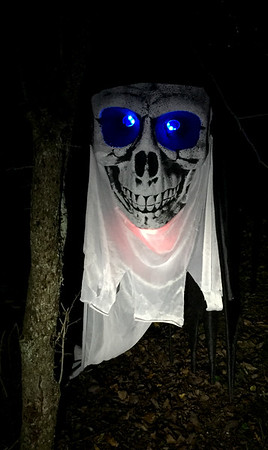 Next year I need to put this decoration on our heat trigger sensor – the motion and sound trigger that came with it is starting to flake out a bit. 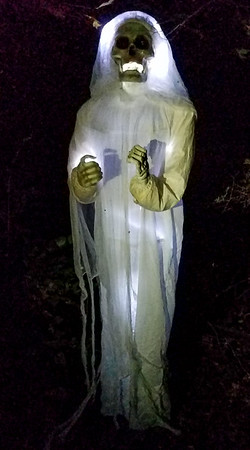 My new decoration given to me by my Nephew Derek.  Definitely creepier in person – the mouth articulates with the words it says – c r e e p y.

Good news, the problems we had with the skeleton wolf sensor last year is all fixed now – as a matter of fact, all the triggers worked flawlessly this year – big thanks to my brother Ron for getting those all ironed out.   Now if he would ever send me the schematics ha!

Picked this creepy cat up for Ron.  He has cats in his house (my dogs shudder every time this comes up) and thought it would be a nice touch in contrast to all the skeleton dogs on the trail.

Lighting definitely has an impact on the scariness of decorations.  Being so dark on the trail this year, a well placed light can generate some high contrast goodness. 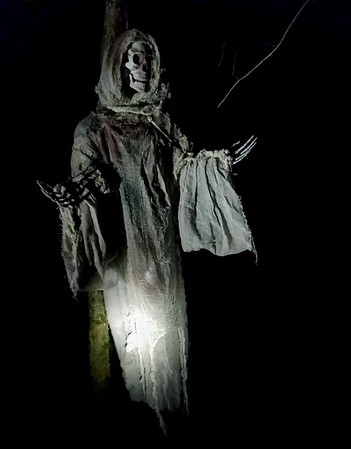 New for this year was the white ghosts (there was a his and hers).  These did not photograph well at all thanks to the bright lights in their head blowing out the exposure when triggered.  Mr… 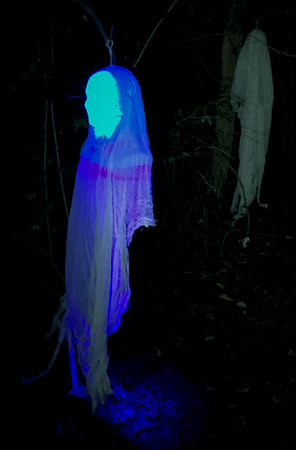 As mentioned, they blew out the sensor when they lit, but it at least gives you a feel for how they looked.

This dude is freaky – the head and hands will light up like it is channeling lighting complete with realistic sounds.

New for this year was the eye lighting and head rotating talking black crow.  Glad Ron was able to get it situated in the tree.

Also new for this year was the multi-color glowing heads.  Brad told me about this decoration at Menards and it finally got marked down sufficiently to pick it up at the end of last Halloween season.  Remember everyone, never pay retail for any of your Halloween decorations – you are wasting your money.  They will start going on sale a week or two before Halloween and then hit clearance at most places the day of or within a few days after Halloween.  Costs retailers too much to store for a year.  You on the other hand have plenty of space (Linda just groaned at that).

Hey, just realized, this looks a lot like the ghost in A Christmas Carol so maybe it is appropriate to have this post now.

Last year’s ground grabber worked much better this year.  Kept the mechanics from getting tangled in the shirt and got the hands oriented right.  Last year wasn’t sure what I was thinking with the hands – fixed now. 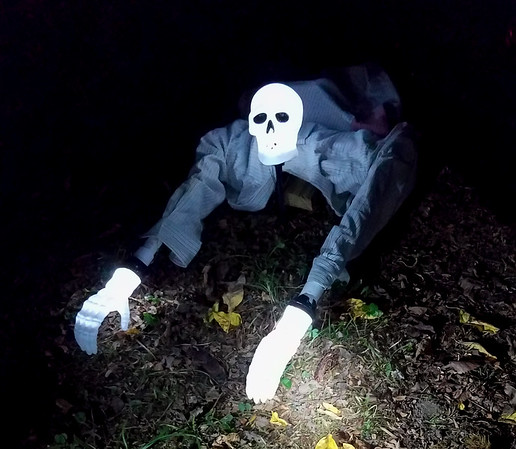 This year’s new and improved grabber.  This ended up having some early hour failure issues, but we know how to fix it now and currently in the lab getting a retrofit to correct the problems – yes, I work on the decorations the year round – just ask Linda. 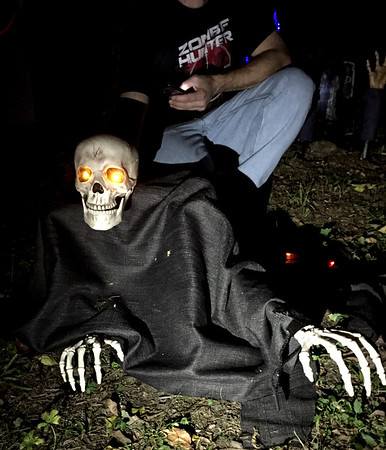 Two more new props for this year – the zombie silhouettes.  Saw this idea on a Pinterest pin and thought it would look cool on the trail with some updates to the design.  It looked perfect against the wall due to the full reflection.

Already talked about this in the previous tutorial, but the furnace tape didn’t give the full effect – still worked sufficiently – will get these into the lab soon and fix them up as well. 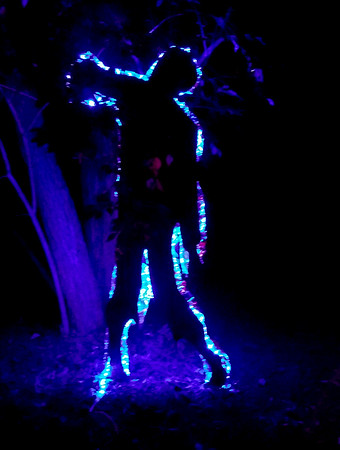 Here’s the red one against the wall…

…and out in the graveyard.  It honestly looked like it was on fire so unexpected extra level of haunt 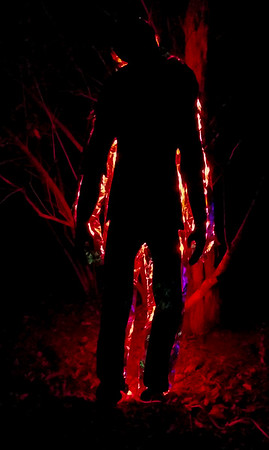 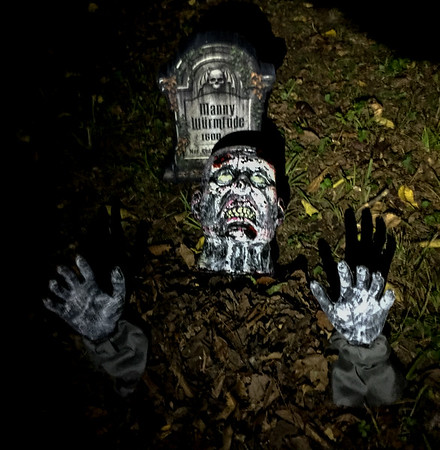 My first homemade tombstone for this year.  The tutorial outlined how I had run out of time on this prop – didn’t get to the stressing part of the operation.  Brad gave me plenty of grief for that – yes, it will be fixed next year.  We also forgot to put it next to the new ground grabber which would have made the dates easier to get.

Paul has a number of hanging props that take on a completely different feel when darkness falls and the mood lighting is added.

Zombie Posey just hanging out and dancing with himself – care to join?  Thankfully all the Posey’s had hands this year – some purchased as in this case, and others hand made – hehehe – see what I did there, crack myself up.

Well, we have come to the end of the first half of the trail.  Hope you enjoyed seeing some of the end product.  You definitely do not get the full effect you get when on the trail … in near total darkness, deep in the woods complete with natural nocturnal wildlife joining in the haunt.  I hope to get the second half out soon – warning though, that goes into the adult section of the trail and the nightmares escalate accordingly.