Moving through November at a rapid pace.  The good news is the delay in posting is due to spending some serious time in the digital darkroom to work up a number of posts from this year’s Halloween projects and the culmination into the Annual Haunted Trail of Tears.  Now I just need to bang out some accompanying words and fire up the blog posting engine. I have already posted one of the new decorations for this year – the zombie silhouettes (link here).  Next up, my first tombstone. 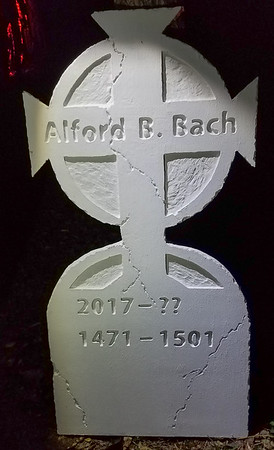 I am going to admit right up front that I didn’t get to finish all the planned steps on this project before the day of the Haunted Trail.  This particular project was slotted further down the to-do list behind other haunted trail tasks that ended up taking way longer than expected.  Most of the work was done after midnight when the other to-do list items were wrapped up for the night.  Live on the edge, use power tools when you are exhausted and half awake.

As I hope you assumed, this tombstone is not actually made out of stone.  The haunting forums are full of projects leveraging the thick 4×8 sheets of insulation panels.  They are very easy to work with and best of all, weigh very little.  I picked up a 2″ thick sheet.  Two things to know about the insulation panels – well, at least the one I picked up.  First, mine had tiny scores in it I didn’t see when I was looking at them.  Guessing this allows them to cut to standard lengths easily, but for our use, results in a stress point.  The second one is they are surprisingly expensive.  The 4x8x2 one I opted for was $26.  Putting that in perspective, a 4×8 sheet of 3/4 wood treated underlayment was only $14.  Trading ease of working with for cost. 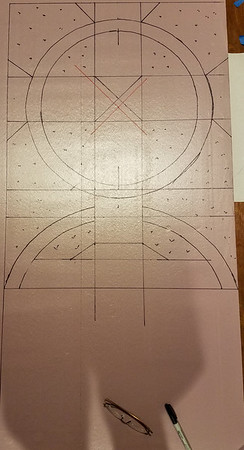 Hit the jump to read about all the steps in building this year’s addition to the Haunted Trail.

First step was to transfer the pattern to the foam.  After spending some time on Pinterest and general Google searches, I opted for a a medium ornate pattern.  Something that would not be overwhelmingly complex for my first attempt, yet intricate enough to invest some hours in.  The OCD in me forced me to bring out the ruler to make sure the symmetry was at an appropriate level.  Lesson number 1: Limit the amount of lines on the face of the tombstone and definitely do not use RED ink.  Found out my paint choice had difficulties covering the lines up and for some reason the red lines were just about impossible to get covered up.  Once the pattern was created, cut out the bounding square with a foam cutter.  Ended up having to completely rebuilt the foam cutter I have from Foam Factory.  The arms on the bow product would not stay tight.  Ended up taking the guts out and building a PVC version along with 3D printed pieces that met my needs better.  With the overhauled cutter, the shape was cut fairly easy.  Lesson number 2: Recommend cutting the foam in a well ventilated area.  The fumes from the melting foam are considered toxic.

Oh and Lesson number 3: Don’t worry about clean cuts, you will be distressing it at the end anyway.  With the tombstone outline cut, the next step is to add the lettering.  I spent a lot of time deciding what option to take here.  There was a planned place for this on the trail that helped on the decision.  More details on the specific use in a later post, but the theme was coming back from the dead.  Thought about the final details while on a couple of runs and came up with this. 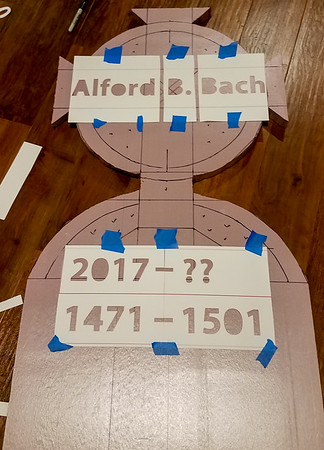 Do you get it?  Hint, the dates give it away.  The letters were worked up in Paint Shop Pro – my go to tool over Photoshop for easy stuff – Photoshop has a tendency to make the easiest things hard so I leave that tool for the more difficult tasks.  Printed out the lettering, cut it out with an Xacto knife, placed them on the tombstone and outlined them with a marker.  Then the tedious and messy phase.  I used the rechargeable Micro-Dremel to cut out the letters.  Picked that tool up last year for my pumpkin carving and loving it.  Nice and compact and fairly balanced.  Also has a handy light in the tip to help see what you are doing.  For the initial cut I used a metal cone bit.  That gave a nice chiseled look. I only went along the outside of the letters.  For the internal foam removal and the letter cleanup I switched to a concave metal bit.  It was flat on the bottom and allowed me to keep the chiseled look on the edges but still have a clean flat finish.  Lesson number 4: This step is messy.  Recommend having a shop vac going to suck up the dust and removed foam pieces.  Although you do not get the smells from the burning foam from the other step, I did wear a sanding mask just to reduce the intake into the lungs.  You can see it taking shape in the shot below – messy, messy, messy. 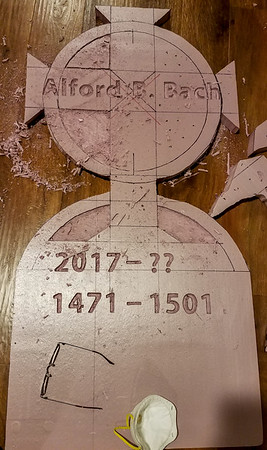 Here it is all cleaned up.  Notice the crisp edges that the Dremel gave.  This is also the point where you can really tell those pre-scored areas.  Basically lines running vertical all the way through the pattern.  Look closely at the line that goes through the R.  I was really concerned about those simply snapping and ruining all my work. 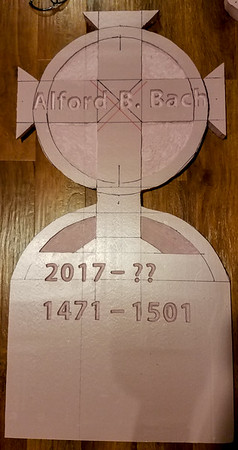 with that done, now time to start distressing it.  Based on the dates, this is supposed to be a very old tombstone and thus needed to look like it had been out in the elements for a very long time.  This is where I adopted the technique used in my favorite haunter’s instructional video,  If you are a haunter and not already subscribed to Grave of the Groves (link here), then get your butt over there and do it.  That guy is very talented and does a great job of detailing all the projects he does.  In his tombstone tutorial, he shows you how to use a basic pocketknife to create cracks.  Basically stick it in about a half inch and wiggle it back in forth.  Drag the knife in random patterns down the tombstone.  If you hit it with a heat gun afterwards, they will open up nicely.  Lesson number 5: Be careful with the heat gun.  Do not let it get too close to the foam or it will quickly disfigure your pattern.  Keep it high and slowly move it closer until the crack starts to separate.  Be creative and make sure you go all the way to the edge (start, finish or both).  After you have done that, simply pull large chunks of foam off with your fingers from the edge where the crack meets.  This gives it a realistic chipped crack look.  While you are at it, give your letters a quick shot of heat as well to crisp up those edges.  Lastly, take your pocketknife and run the blade perpendicular along all the edges of the tombstone pattern.  Being out for those number of years would have roughed up those edges thanks to the rain, ice, snow etc.  Hit those with a heat gun also.  Here is what mine ended up looking like after that phase. 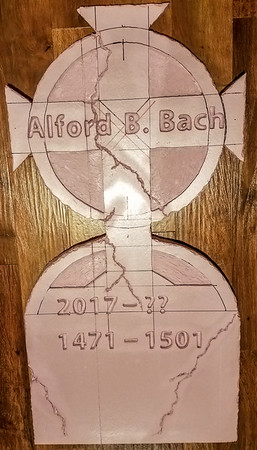 Okay, now for the painting phase.  At this point the tombstone is pretty fragile and well, still pink. Based on the various Halloween forums, the recommendation was to use Drylock.  Another warning, a gallon of this is expensive – something like $32 at Lowes..  I ended up only using about a 1/4th of the can so you could probably get away with a smaller size.  I plan on making more so no issue there.  The nice thing about Drylock is it has a grit already in it and it dries very hard and stone like.  This step took me forever and the main reason I didn’t get all the intended phases done.  It took over three coats to get it sufficiently covered to the point the pink of the foam or the red from the marker lines showed through.  Lesson learned number 6: Pick up some small craft brushes to deal with the lettering.  The smaller brush allows you to make sure you get all the gaps in the letters covered and more importantly, allows you to brush out the excess paint that will build up in them as you are covering the rest of the surfaces.  I constantly found myself going back into the letters and removing globs of paint so I could keep the letter depth.  Lesson number 7:  Find the cheapest brushes you can find.  Drylock is thick and will build up quick on the brushes.  It was pretty clear after the first coast that it wasn’t worth taking the time to clean the brushes.  You are putting it on thick anyway so expensive brushes are not needed.  Picked up 3 brushes for like $6 and they worked fine.  Lesson number 8: the grit in the paint will show the brush stroke direction.  Recommend going in one direction (vertical looked best) for the entire face of the tombstone.  I did choose to go in the same circular pattern for the inner portion of the cross giving it a nice rounded pattern that set the circle off from the cross.

This is where I ran out of time.  The paint was still in the process of drying the morning of the event.  The plan was to put a diluted black paint wash on it (per the Graves of the Groves tutorial) to weather it.  That definitely wouldn’t dry in time so went with it as it was.  My friend in haunt Brad was making fun of me for having the cleanest looking 516 year old tombstone.  I promise to get that done before next year’s trail.  Putting extra paint in the scores in the foam solidified that up nicely along with the rest of the tombstone.

Pretty happy with the results for my first attempt.  Hope you enjoyed reading about another one of my Halloween projects – there are plenty more heading your way.

2 thoughts on “Project Alford B Bach”