Down to the wire now. Murphy has entered stage right and wreaking all kinds of chaos on my valiant attempts to make my blog quota for this month. Turns out my hotspot can’t even get a signal on one of the busiest highways in the Midwest. Everyone is excited about driverless vehicles and we can’t even get reliable Internet access driving on major highways. I envision some kind of Simpson’s episode where all the autonomous vehicles suddenly take a right turn off the road when then hit a dead spot. Well, no time to cry over spilt milk – I have typing to do (and hopefully upload if I ever get a signal again).

Decided the last post of month would focus on something that is taking a majority of the time left over after races and training. That’s right, I bring you the first of what is likely to be many posts on the road to Halloween. Our annual Halloween party is fast approaching which means work is picking up on the highlight of the night – the Trail of Tears our haunted trek through the woods. I say picking up, rather than start because the work on this trail is a year long event. Ask my wife who has to put up with all the decoration builds that are always cluttering up the basement. Thought I would give you glimpse at one of those new decorations

Although it is tough for me to admit it around friends, I do hang out on Pinterest a lot. I get accused of being a soccer mom by Linda. Truth is, the haunters are all over that site and a great wealth of ideas. One of the links that caught my attention was a backlit witches scene someone had posted. This got me thinking that would be a good idea for the trail. Seemed simple enough, cut out some shapes, add some lights and presto – new scare. To switch it up a bit, I wanted to go with a zombie theme.  First task was to find some decent zombie shapes.  That ended up being a bit of work searching through the expanse that is the Internet.  Probably went through a couple thousand images and eventually narrowed it down to two – note, not sure the source of these images are, but all rights remain with that identity – this is a non-profit use and only documented here as a reference to the concept.  Those images were placed on a grid and printed out on a standard paper.  Using the tried and true method from my childhood, gridded up larger sheets of butcher paper and transferred images by hand.  The key was to minimize cost (a critical theme in my decoration planning).  I knew I wanted to use plywood, so that gave a 4×8 dimension to work with without having to invest in multiple sheets.  With a few tweaks and rearranging, I got it to fit.  Cut those larger versions out and laid them out on the plywood.  Note, Linda and I spent a loooong time in Menards trying to find the cheapest option.  Turns out, 3/4 sealed underlayment was the cheapest plywood choice – ~$15 a sheet.  A bit rough on one side, but nice and smooth on the top side.

Hit the jump to see how these new decorations turn out!

Once laid out, I took out the Roto-Zip and went to town.  Been awhile since I’ve used that handy device as indicated by the two bits I broke trying to be too aggressive.  This was supposed to be a day project and this part was taking a bit of time.  Learned quickly that having to stop and change bits was an even bigger waste of time.  Once they were successfully cut out, I hit them with a coat of black.  I put a couple of coats on both sides using close to two cans of spray paint.  $8 for that, but you can save some money if you go with regular paint and brush it on with a cheap brush.  I thought this would take too long on the rough side of the plywood trying to get all the gaps etc. which is why I went the lazy spray method.   Technically I could have just done one side, but though it would last longer if it was sealed.  I think they turned out pretty nice – propped them up to get a feel for how they would look.  Next up – add some lights.

This took a bit more time in Menards figuring out ow to accomplish this.  The best attempts on Pinterest were done with rope lights.  Seemed like an appropriate option, but wasn’t sure how to affix them to the back of the figures.  Tried a few aisles for various options until I found some nice cable clips in the wiring section.  These had a single nail with a U-clip to the side.  Perfect.  Drove over to Walmart to get a set of rope lights I had used for our deck.  Found a purple one and a red one for $16.  Not sure how much was needed picked up a couple 16 footers of each color.  Then went back to Menards because I forgot to get zip ties.  While there I stumbled on a sale of Patriot rope light – red and blue.  These were a bit smaller but a) were cheaper – only $7 a piece but also were encased in colored plastic giving them a brighter look.  Score – picked up a couple of each color, grabbed the ties and headed back home.

Next step was to hammer in the clips near the edge of the figure and then zip tie around the rope and the u-clip.  Definitely took two sections, but it went on nicely 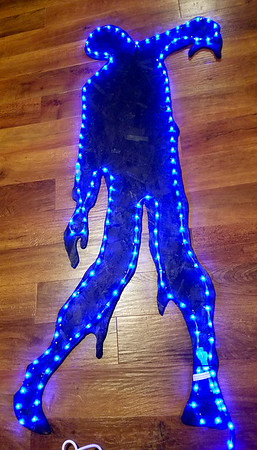 Hit a snag doing the blue one and a lesson learned to anyone else that tries this – put them on with the lights PLUGGED IN.  I laid the two rope sections all the way around the zombie the first time and then plugged it in – dammit, one of the sections was bad.  Ugh, this is the second time I’ve had to be return rope lights from Patriot.  Two of our solar rope lights from them had to returned because they didn’t work out of the box. Maybe that is why they were on sale. Pain in the butt – clipped all the ties and took the bad section off – returned it and then repeated the process to put it back – this time it was put on while it was lit.

And now the fruits of my labor.  First off, the red one.  It really works best if there is something the light can bounce off of.  My plan is to put them in front of some huge trees down in the woods.  Very pleased on the overall effect!

Blue one looks just as good! 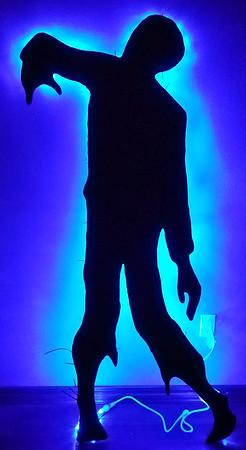 As you can tell from the pictures, I still needed to clip the ends of the ties.  Tedious work, but a small part in the overall effort.  The project ended up taking an extra half day due to the return fiasco.  I would put this on the easy scale other than using a power tool to cut out the shapes.  Total cost $15 for plywood, $28 for the lights, $3 clips, $3 plastic ties and $8 for the spray paint.  $57 if my math is correct.  You can bring that price point down a bit with thinner plywood, brushed on paint and maybe cheaper lights, although I did get the latter pretty cheap.

Can’t wait to get these on the trail!  That’s a wrap ladies and gentlemen.  I did it and none too soon – I can see our hotel ahead.  Time to relax a bit before getting back in the saddle for October’s posts

2 thoughts on “Project Undead: Another Year, Another Haunt”