Busy, busy, busy!  Pretty much the story of my days at the moment.  If I’m not at my day job, I’m working on Halloween decoration projects.  If I’m not doing that I’m getting caught up on yard work and in between all of that, I’m on the road wearing rubber off my running shoes.  Probably not going to let up anytime soon, so might as well embrace it. The toughest part of all of this is a series of 4 half marathon races in something like a month and a half.  Seeing as how I just completed the second of that set two days ago, figured it was prudent to blog about the first one! 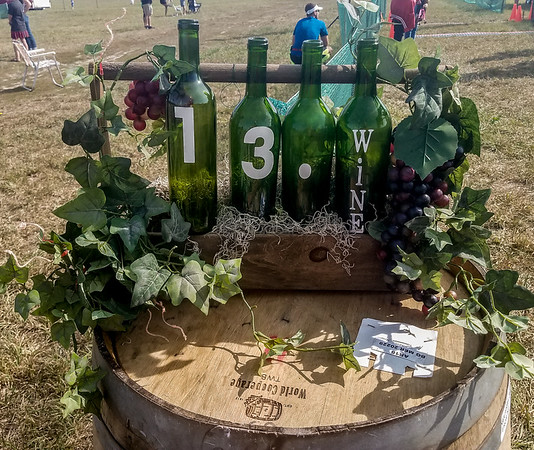 The first of the half marathons happens to be a new one for me.  At the expo for the Illini Half Marathon back in April, they had placed a card in our packets advertising a 13.Wine run in Baroda, Michigan.  That was quite intriguing having never heard of a wine based race and it really wasn’t that far away – on a normal day looking at about 4 hours worth of driving.  Best of all, Linda was more than willing to take on the 5K if there was wine to be had at the end.  Ended up signing us both up for it (with the advertisement card there was a discount code yeah!).  This would also give a half marathon check in another state – a new life list concept I’ve been kicking around.  So up we went to Michigan to earn us some wine … after an overnight stay at the Joliet Casino campground – opted to cut the drive time a bit so we could pick up the race packets the day before.

I must admit, having been spoiled by the like of the Bix7 race and other large events, my expectations were probably way too high.  After winding our way around traffic backups on the main highway between Chicago and Baroda and then fighting closed roads in that little town we finally arrived at the packet pick up located at the starting line of the course.  We drove up and it was just a small pop up tent in the middle of a field (literally in the middle of a field).  It was also a little concerning that there was only one other participant picking up their bibs.   Pretty apparent that this was not going to be a large event as was originally assumed. Again, part of this assumption was fueled by the fact they were advertising at a race in a different state which is fairly large – their marketing campaign at least worked on us. 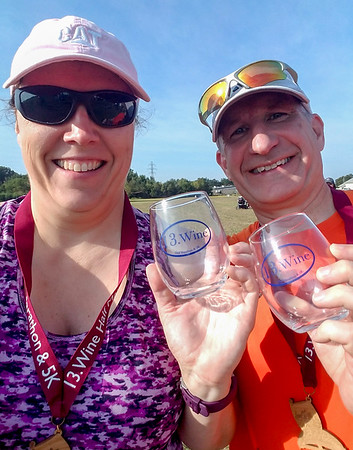 hit the jump to read how the race turned out!

We picked up our bibs and shirts.  Linda ended up getting screwed on the shirts.  Hers was a women’s fit sizing which typically run smaller than standard sizing.  They wouldn’t exchange it for a larger one until race day, so she had to bring it back.  I’ll go ahead and kill the suspense on that.  She gets there before the race only to be told it has to be exchanged AFTER the race.  As a result, she had to carry that shirt the whole way on the 5K only to then find out they didn’t have any larger sizes available – SUCKAGE – drive 4 ours to a small race and she couldn’t even wear the spoils.  Being the super nice husband that I am, I gave her my shirt – lord knows I have plenty of them.  After dealing with the packet pickup, we checked in at a nearby campground and then probably made a questionable decision.  Being in wine country, it seemed appropriate we would go check out some vineyards…and do a bit of tasting.  Guess which part of that last sentence may not have been the best activity the day before the race!?!  To our credit, we did opt to share the 5 wine tasting offering and even had are pourer ease up on the portions.  They had very tasty offerings including ICE WINE for an additional charge – hell yes, we took them up on that, we are suckers for the icees.  Admittedly, I was not expecting that wine to basically draining all the fluid out of my body over the course of that night.  Not an ideal situation if you are preparing for a long run hours away.

Our alarm clock rattled us awake in early hours of race day.  To every runner’s delight, there was a serious chill in the air.  Loaded the RV up and headed back to the starting line.  For some reason they did not want the participants to park in the empty field next to the line – nope, we had to park in another field across and down about three blocks.  As much as runners like cold weather, we equally HATE wet shoes.  That is exactly what we got walking across the dew covered field.  As suspected the day before, this race was in the 300 range of participants – slightly bigger than the IVS Half Marathon race in Springdale.  Figured it would be like a training run that required a much longer drive to get to.  Linda’s 5K went off after the Half participants, so I wished Linda luck and headed to the line.  I looked around to wave goodbye to her as the gun went off, however, she was nowhere to be found.

It wasn’t long before there was a self revelation – wine country is really just code for HILL country.  Holy crap, that course is NOT one for the timid or soft.  If you spend any time on this blog, you are aware I consider myself a strong hill runner.  My training courses are some of the toughest you’ll find in the area – yet this course still took a major toll on me.  It wasn’t so much the amount of hills as it was the fact the hills were so looooong.  There is one around mile 9 that must have gone on for nearly a mile and a half.  It even had a false crest on it that nearly broke my heart after digging deep to make it up so late in the race only to find out that there was only 50 feet of rest before heading up again.  A quick check of my Runkeeper race summary confirmed the elevation change was the most of any race I had participated in to that point – that is saying something.  Adding to the struggle was the fact the cold weather left us about half way into the race giving way to Mr. Heatmiser.

From a race perspective, it turned out to be a lonely endeavor.  Once I hit my pocket around mile 5 there wasn’t a lot of interaction with other runners.  We were spread out pretty good and the course didn’t really wrap on itself other than the beginning so little chance to see how you were positioned.  The hills themselves shielded the view of runners ahead of me only catching glimpses of people as they crested the hills.  Between mile 5 and 6 a guy came up from behind and paced with me for a bit.  He commented on how glad it will be to have the wind behind us on the way back – Ummm okay, it was like a 5 mph wind at best and that was being disrupted by the hills.  He ended up picking up the pace and pulling away from me.  Mental note, that’s the guy I want to catch at the end.  Remember that long ass hill mentioned above… well, that is exactly when I spotted him again.  That hill was wearing him down and I was making up distance rapidly.  Always good to have something to channel your focus on.  By the top of that hill he was definitely in catchable distance.  Opened up the stride a bit and closed the distance by mile 11.  Having burned some energy to cover the distance, opted to hang on the back of his shoulder to recharge the batteries a bit.  Half a mile later I was recovered.  I know he could hear my footsteps, but now it was time to let him know he was going to have to work to beat me. Maybe that wind will save him after all.  At mile 12 I was now parallel with him and matching the pace.  That is when he started talking to himself – “Gonna go… gonna go … going to go now”  and with that he takes off.  Impressive, a whole mile to go and he engaged the afterburners.  Not time for me yet, so he pulled away… but not as much as expected – maybe 30 paces.  Hmmm this seemed like a good breaking moment.  I have a counting system I use to close on, engaged that and found myself right back parallel with him again.  You could tell the frustration.  I had to hold it a bit to recover from the previous burst.  By now under a half mile to go.  He looked over and encouraged me to go if I had anything left – I did and I went.  On the final turn back into the field, I looked back and noticed he was on fumes some distance behind.  Closed out the race and scanned the crowd looking for Linda.  She was nowhere to be found.  My worries were soon put to the rest when I noticed she was heading back from the porta-potties.  Turns out that is why she missed the start of my race too – did I mention that wine tasting before a race may not be the best decision? hehehe. 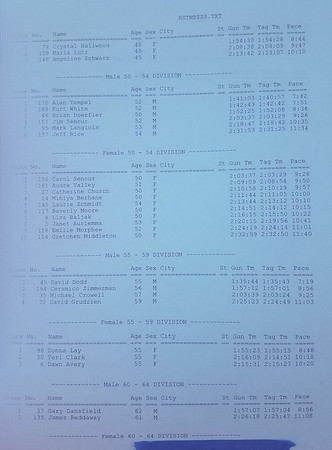 … but if you look real close you will see that I ended up taking third in my age group – sweet.  Linda had mentioned that I might have done pretty good based on the small number of people that had crossed ahead of me.  Get this, I would have taken 2nd in the age groups under 20, 1st in the 20-24 age group, 2nd in the 25-29 and the 35-44 ranges (4th in the 30-34 group) and then first in the age group right behind me and second in the group right ahead of me.  Obviously my group had ringers in it!

Oh, forgot to mention, major disappointment when they gave me my finisher medal.  I was just a wood cutout of a wine glass with the race logo.  The picture above was me pointing to it going “WTF, I ran my ass off for this!!.”   This feeling was tempered greatly when they gave me my third place award. 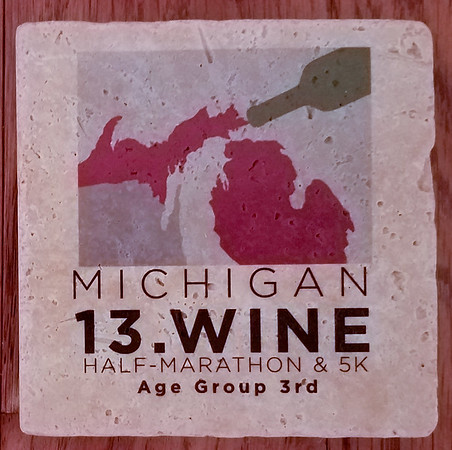 Now that is pretty cool – a real nice stone tile with the race logo on it.  Sure enough, they had wine for us to drink at the end of the race.  They also gave us wine glasses which made up for the cheap medals… or should I say woodies.  Before I forget, a big congratulations to Linda for finishing the 5K – her second one.  Word has it she is looking to move up to the half marathon next year … errr, maybe not hehehe.

Anyway, overall it was a fun excursion.  Not sure we would do it again next year – might try to find another wine themed race in another state.  Oh, heading home we got caught up in all the traffic heading south for the full sun eclipse – nightmare.

Take it easy everyone – look for another race post soon – my third in the set is this Saturday night.

4 thoughts on “Time to Wine”