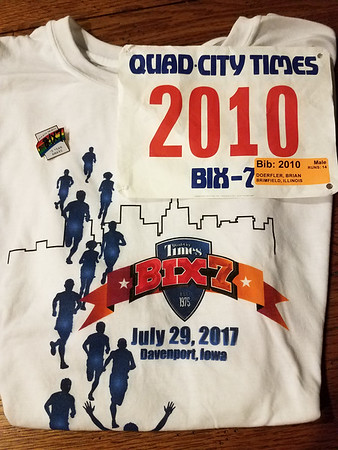 Keeping with the sealed for freshness theme, Today’s post recounts an event that happened mere hours ago! 16.5 years ago I had to make a difficult decision to put a bow on my martial arts hobby. It was taking a toll on my body and at that point in my life there wasn’t enough recovery time to get healed before taking another round of injuries. Problem was how to fill the healthy athletics void that would leave – then my wife mentioned something called the Bix 7 race in Davenport IA. Soon after purchased some running shoes and jumped into a new adventure. 15 years ago practically to the date I completed my first Bix 7 and I was hooked. Guess what… 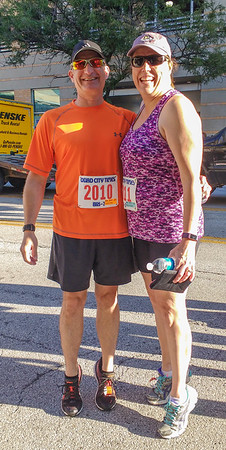 I haven’t missed a Bix since that initial run – 15 years of toeing the line and taking on one of the toughest 7 miles course you can run in the area.  They even give you an anniversary pin if you look close at the swag picture at the beginning of the post.  I wasn’t the only family member testing their grit on the course.  Linda also took part in her 16th Bix race opting for the Quick Bix which is a 2 mile alternative to the full race.  She met up with a friend from her childhood who had recently started participating in the event.  My running friends were planning on running with me today.  Sung made it even though he has been struggling with some leg issues.  Unfortunately, got word right before the race that Ryan was not going to be able to make this year – not sure what issue there was, but I know it must have been disappointing having trained for a number of months for it.  As you can tell, the sun was shining on a cloud free day and the weatherman promised me a cool temp at race time.  That ended up being a slight exaggeration – they claimed 61, it felt hotter than that at the starting line and it only got hotter from there.  Admittedly, this was still better than we had feared being this far into Summer.

Hit the jump to read how things turned out!

The actual race went pretty well.  The trek up Brady was still a struggle and that second hill near the midpoint – well that is still a major kick in the ass.  Those two hills are the main reasons the hills of Jubilee College are my training stomping grounds.  This year the first half of the race was a bit more special.  I got to run next to Bill Rodgers.  For those who do not know him, he is a legendary elite runner and the godfather of the Bix7 race.  Not sure of the whole history there, but he has been running the Bix longer than I have.  He actually runs more on the sidewalk than he does the road putting him right next to the crowd that lines the roads and cheers us on.  Talk about motivation, everyone he passes in the crowd and even other runners yell out his name offering words of encouragement.  To his credit, he acknowledges all of them.  Roger’s ended up pulling ahead on the second half of the course.  When they called his name at the finish line, I was just turning the corner for the final run out.  Nothing like getting owned by a 71 year old!

As far as the race assessment goes, the body struggled a bit on the second half.  Outside of the two major hills, the major suck the gut up moment in that race is at mile 5 which has a fairly steep hill with a turn in it.  Just keep telling yourself that once through that, there is a major downhill (the reverse of the hill you have to climb to start the race) and then the run out. Everything to give was left out on the course making for a satisfying race.  Best part of all …

… no need for one of these hehehe.  Nope, just a few painful moments when the Whitey’s popscicles managed to produce a brain freeze.  Future reminder, we need to make shirts next year that says “We BIX for Scicles”.  Linda pointed out a shirt at the expo with “We have to climb THAT for a beer?”  Oh, almost forgot to mention another special nuance to this year’s race.  Linda and I opted to get a room at the Radisson this year.  This hotel is located steps away from the starting line.  Gave us some extra sleep time in the morning and made life super easy – get up, get dressed, walk out the front doors, race.  How awesome is that!  Yes, we are planning to do that again next year.

Been checking back on the Bix 7 results website and it appears they have lost my times.  Fingers crossed they can locate them since I really want my chip time for this race.  I know I crossed at exactly 58 minutes race time.  Just need to know the offset from when I crossed the starting mats.

At least I had my Runkeeper with me. 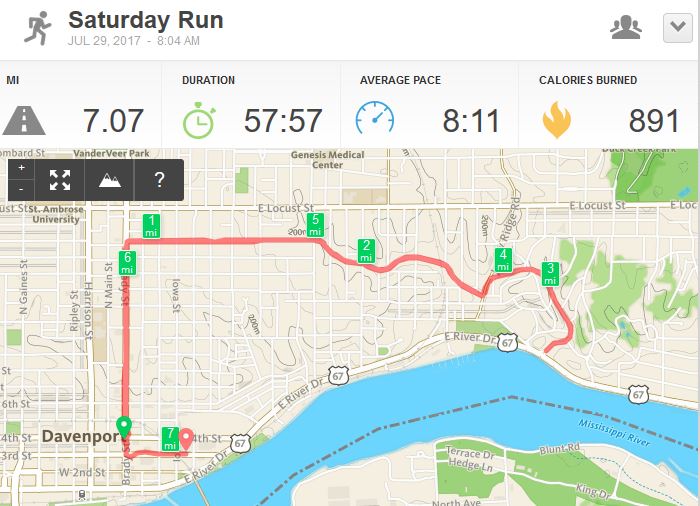 Very happy with the splits as well – was feeling the course in mile 5 as mentioned above, but pulled it back in for the final kick!

Bad news for the people who run this race for the fun experience.  This is the last year for the large slip and slide near the end of Kirkwood Blvd.  A mainstay at the Bix – did not hear any reasons as to why.

Big thanks to Linda for getting them to do that for us.  If you are reading this, consider lacing up the shoes and joining us for next year’s fun in the sun!

2 thoughts on “Another Bix 7 in the Books”