My loyal readers of my wildlife blog are probably wondering where I’ve been this month, this being my third non-wildlife related post in a row!  I’ll take care of that in a bit, but right now the focus is getting the running queue drawn down before the Bix7 which is less than a week away.  This post is a bit ominous when in comes to that upcoming run.

The third run of the season is typically the Steamboat Classic – this year was no different.  Having had good luck on the April races, things were looking up for this June race.  However, there is one aspect of the Steamboat that the Illini races did not have.  That difference is spelled out right there in the name S T E A M.  One might be under the impression that it is named in honor of the paddle boats that ruled the Illinois River.  I, on the other, hand believe it is named because that is what comes rolling off your body long before that race is finished.  There were false rumors from the often wrong Weather.com app that it might be bearable this year – WRONG AGAIN. 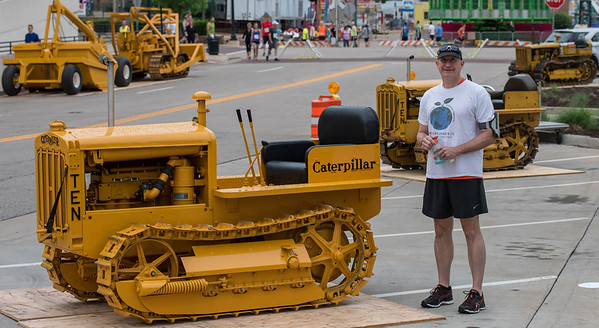 Hit the jump to see how this race turned out (hint, not well)

At the start it didn’t feel too bad.  Slightly overcast and a bit of a breeze.  Nowhere close to the conditions at the starting line at the Illini races.  No double shirt needed for this race.  Even with the high start temp, was feeling pretty confident.  Training runs were all good to that point and the plan was to stay under control.  No reason to push at this race.  Anything in the 8:30’s to 9:00’s would be fine with me.  Even the two mega-hills didn’t add up to much of a concern having included them in my Springdale training runs with Ryan and Sung.  Confidence was high – Miss Reality didn’t care.  By the way, nice to be able to get a pre-race shot with our babies.

Found out a few days before race day why I was able to sign up for a discounted fee.  Entries were way down this year.  In the past this race averaged around 4000 toeing the line.  This year the number was closer to 2000.  Either there was a conflicting race that was pulling participants or possibly the history of heat was catching up to them.  To be honest, the better answer is people were losing interest in this race due to the craptastic expo and weak post race party.  The only race I enter that has a poorer expo is the IVS Half Marathon – they however have a nice hoodie for the swag which makes up for it.   Steamboat has a few booths out front of the sponsor’s running store.  Then you get to weave around the store to get your t-shirt pictured above.  That shirt went directly into Linda’s drawer.

That was in the past by start day – focus had now turned to the race.  There have been too many race posts to this point for you to think I was stressing at the start.  Well, other than wondering where my personal race photographer was – there she is. 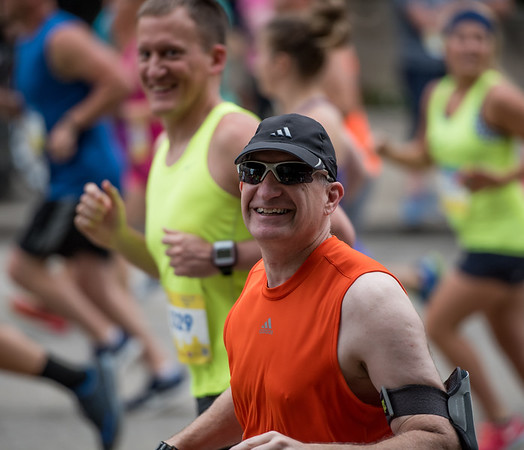 So the first two miles went as plan.  That put Ryan and I at the base of the first loop of the BIG HILL.  The clouds were starting to break up by then and the heat was inching up.  Anyone who says that hill doesn’t take a toll on them is a liar.  Ryan and I have done that hill week after week and there isn’t a single time we’ve made it to the top that we couldn’t feel the exertion it took.  Bad news is we know that we will have to traverse it one more time before the race is over.  Something seemed a bit off, but pushed it out and focused on the flats that make up the top part of the loop.  According to the GPS, the splits were still good.  This also came with some fluids so the batteries were steadied a bit.  Things continued smooth until we found ourselves at the base of the BIG HILL for the last time.  This time it was a struggle.  Remember looking over at Ryan and noting he was suffering as much as I was.  The heat had crept up to a nasty level now and it was taking a toll.  There were some mid-race pictures that were provided by the race sponsor – decided to spare you pictures of me looking like death ha.

At mile 8 my body hit the proverbial wall.  I had conquered the hills only to succumb to the heat lords on the final flats.  What the hell!  The main sign is I started seeing double images of the road’s centerline.  In the past I would have ignored this and soldiered on – that was the past – that day Linda had decided to come along for the run and take a perfect viewing position – in my head.  Here voice was ringing in my head demanding me to take heed of the warnings.  Not wanting to face her wraith if something were to go bad, did something that I do not take lightly.  If you train as much as I do, you know exactly how I felt at that moment.  Let Ryan know the situation, gave him some encouragement and hit the kill switch.  It was time to walk for a bit to get the body back in line.  In my minute or two of walking I managed to hit a water station, grabbed a cup, took a few big drinks and poured the rest on my back.  Time to get going!

Decided to push it a bit and see if I could catch up to Ryan – eventually he was spotted ahead.  Using my count system managed to eat up the distance and once again paired with my training partner.  Turns out I was able to catch Ryan because he was running on empty as well.  By the time I reached him, he was getting ready to shut it down.  We went about another half mile, we turned and looked at each other and opted to shut it down again.  This race was eating us up.

We picked a landmark and kicked it in again when we reached it while walking. Probably less than a minute, but humbling to say the least.  That was the last bit of recovery we needed to close out the race.  By the time we made the final turn, we were committed to ending this race strong.  The race had beaten us, but no reason to let it own us.  Ryan and I dug deep and ended strong.  To Ryan’s credit, he took me by two strides at the very end.

Definitely not one of our better races.  Stopping once is embarrassing enough – twice is downright pathetic.  I blame Linda and let her know that she was to stay out of my head in future races.  No doubt we had to work for our medals this year.  To top it off, we were left standing in a long line to get an orange and a couple of other food items.  A few more bottles of water poured over my head and back on my feet again.  Once again, no need for one of these (although it might have been closer than I will ever admit hehehe)

Definitely not what I wanted for times at the start of the race – will take it based on what it took to get through it.  Oh well, back to training.  Hoping for redemption at the Bix7 – the best post race party in the land!

Take care everyone and watch the heat – been a heat bath as of late!

2 thoughts on “Steamed Rolled Over”