Hope you enjoyed the previous post on that creepy bug.  After that short break from the aviary features we are going to bring you right back to regularly scheduled programming.  That’s right, back to those feathered wonders we group into the category of waterbirds … because they are birds and often found in water, which is really just a clever way of not having to tell you if it is a Duck or not – Duck being what we call something two away from a Goose (okay, lame joke, but admission here is free).  Since no one is apparently laughing at my joke, let’s get to today’s feature.

I find these particular birds intriguing from the dead on perspective.  If you are not a birder, it is well known that most birds look like a total dork from head on – don’t believe me, look at a Green Heron from that perspective and you will immediately know what I am referring to.  Pretty sure the Loon is more appealing due to the eyes being more forward on the head and the fatter neckline give it a more beefy feel.  This specimen is from the Common Loon family and was spotted in a small river in Kentucky back in April 2015.  We were doing some birding in and around the Kentucky Dam area and found a nice trail that followed the river. 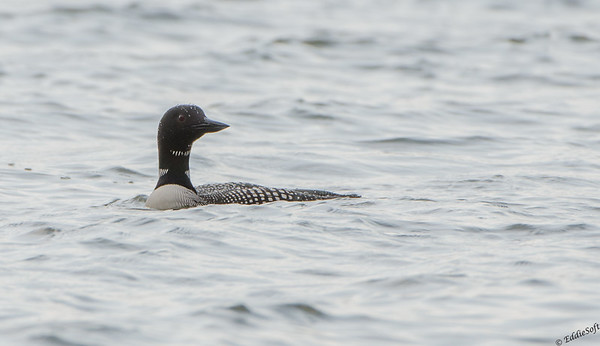 Hit the jump to see a few more shots of this sleek looking bird.

I was busy scanning the area for anything worthy of shooting and my peripheral vision caught an odd shape in the water – looked over there, saw nothing and figure the heat might be getting to me.  Several paces down, caught another odd shape out of the corner of my eye only to look and again be met with disappointment.  What the hell – where’s the Powerade?  Not much longer the mystery was solved.  While staring across at the opposite bank, the Loon came up from under the water.  Good news everyone, I am not going insane. 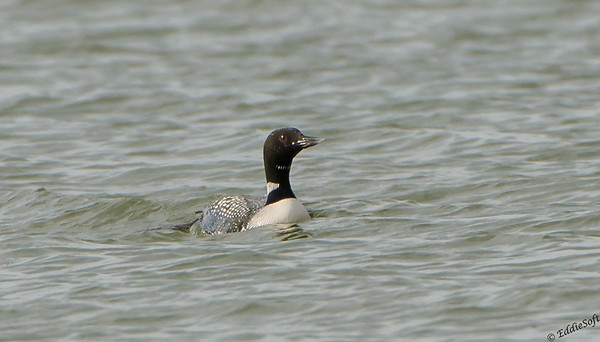 Loons fall into my cool category of birds.  There is something about them that gives you a sense of absolute calm.  They swim along in an easy manner and then blow air out of their lungs and dive like a fighter jet then moving through the water with the ease of a submarine.  Some of this ability can be attributed to the fact they are denser than most waterbirds because their bones are solid.   Cornell mentions that they can slow their heart rate allowing them extra time underwater.

This characteristic tends to make it pretty hard on photographers to get a bead on them.  They will dive in front of you and then show up 75 feet away.  Gather up the gear, head to the new location only to find yourself staring at an empty body of water.  Word around the nest is they know this annoys us humans and consider it comedy at our expense.  This is also why their call is like an evil clown sending out blood curdling laughs as it slashes and hacks at whatever innocent victim that happens to trip over their size 25 feet. 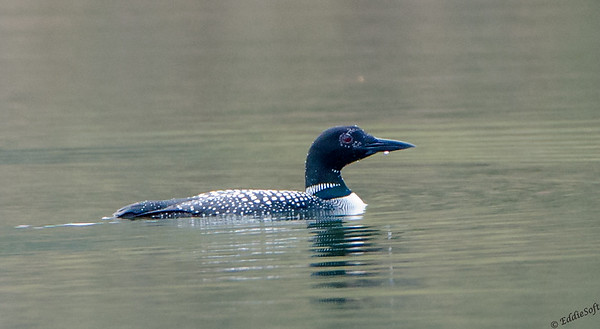 In case you are new to birding, the Loon is easily to spot at a distance due to how low their body rides in the water.  Usually level with the water and maybe one or two inches above it.  Once you have spotted the profile, you can always verify it by the beefy bill and the football player neck mentioned previously.  They are more commonly found in the Canada region during the summer months, but migrate back and forth across the States to the coastal regions.  Strangely enough, I have never seen a Loon in flight.  While researching for this post (always trying to make you a little more knowledgeable in appreciation of you taking the time to read my ramblings), it was interesting to note they can fly upwards of 70 mph.  Apparently they also have a similar trait to the American Coot in that they need a long runway to lift off – sprinting on water in the neighborhood of 30 yards up to a 1/4 mile – pretty sure Coots lift quicker than that.

Well, out of shots so better call it a post for today.  That quota is looming large at the moment, but starting to feel like it is in reach.  Take care everyone.  See you again real Loon now (see what I did there, I crack myself up hehehe)

2 thoughts on “The Loony Bin”