How are doing today everyone?  Just had my humor for the day reading about and viewing all the pictures from our precious Democrat politicians wining and dining with Russian ambassadors.  Suspect the Trump trauma is so severe that the hypocrites have suffered some serious long term memory loss.  That doesn’t bring out the smiles as much as when they come back and try to cover their lies. Kind of reminds me when Democratic Rep. Diana DeGette tried to explain how high capacity magazine bans will reduce gun crime.  Let’s all relish in this classic statement.  “I will tell you these are ammunition, they’re bullets, so the people who have those know they’re going to shoot them, so if you ban them in the future, the number of these high capacity magazines is going to decrease dramatically over time because the bullets will have been shot and there won’t be any more available.”  Yes, folks, when realization hit that she has opened her mouth and proven to the world she has no idea what she is trying to legislate on we get the hilarious response from her office,” she simply misspoke in referring to ‘magazines’ when she should have referred to ‘clips,’ which cannot be reused because they don’t have a feeding mechanism”.  Sorry, I just fell off my chair laughing again.  All you handgun owners with clip feeds are going to be in big trouble.

In honor of the brunt of this humor, thought I would follow up my last birding post with a B[r]unting (hey, I heard that groan all the way over here!). 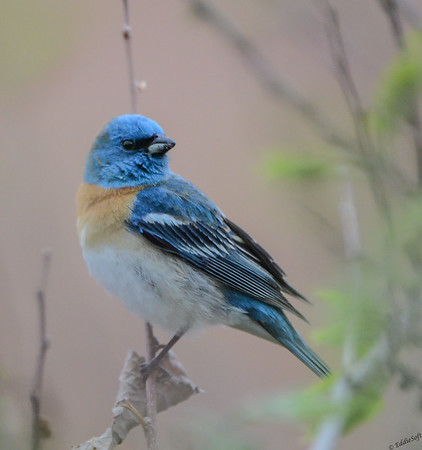 That loyal readers is called a Lazuli Bunting. Like the last post on the Phainopepla, this Bunting also represents a new check in my North American Bird List.  Starting to get a respectable number now in a desperate attempt to keep up with my brother Ron’s tallies.  I have benefited significantly from his recent introduction into the bird blogging arena – you may not be aware, but we have a birding rule between us that doesn’t allow us to count a new bird on our lists unless we have posted about it first on our blogs.  Don’t feel sorry for him though, he was properly warned before taking on this new responsibility.   These last two posts alone would put me at 2/3rds of his new (post blog) bird count heheheh. 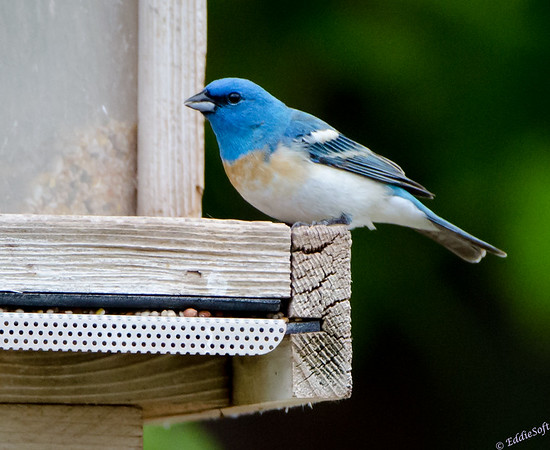 Hit the jump to see and read more about this shoot!

This multi-colored Bunting was captured in the tin back in May 2014.  As mentioned previously on my Western Kingbird post (link here), we were out in the Denver area at the Teacup Dog Agility Nationals.  Never wanting to waste an opportunity to bird in a new local, I took to the web to find some good spots to check out in the area.  One of the top places that came up was Red Rocks.  It didn’t even occur to me until we got there that this was the location of the famous Red Rocks Ampitheatre. I have watched countless recorded concerts from this local and had hopes of one day to get to attend one in person.  Little did I know I would have the opportunity to hike the grounds looking for cool birds.  Unfortunately, there was not an opportunity to catch a concert while we were there, but I definitely came home with plenty of wildlife fodder for the blog. 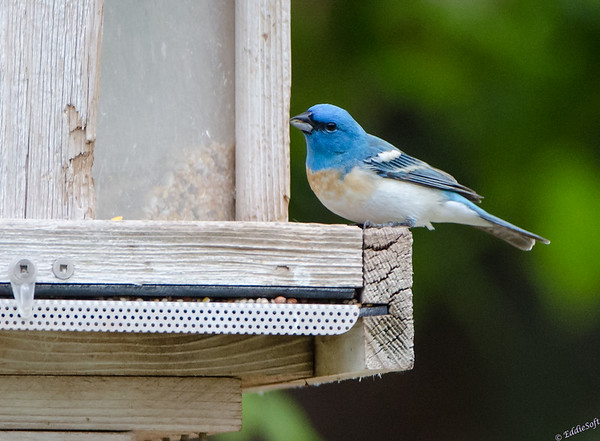 I highly recommend dropping by there sometime if you consider yourself a birder.  There are plenty of trails that take you through different terrain (rocks, brush, fields, more rocks etc.), but be prepared to expend some energy.  The main loop trail takes you up and down some mountainous terrain.  Conditions like this is the exact reason I’m a runner and gym rat – hiking all day in the thin air of Colorado carrying around heavy camera equipment will take its toll if you haven’t put sufficient time into the body. 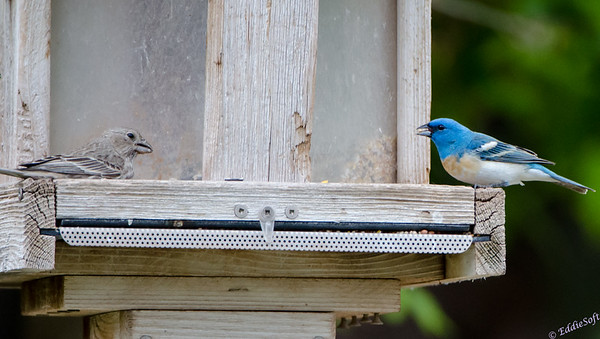 For those looking to track down this bird for yourself, the best place to find them is on the back porch of the Visitor Center – note, the Park Visitor Center, not the amphitheater box office.  Simply walk through the building to the back and go out on their porch area.  Located in the grassy area the porch overlooks is a couple of bird feeders (think there were more than one – not sure now).  Note, on our second trip out to Red Rocks we discovered they use this grassy area for weddings – a gorgeous setting for that special day.  Anyway, the Lazuli Buntings were busy enjoying the seed at the feeders – and I was enjoying taking their pictures ha.  Luckily one ventured off the feeder providing an opportunity to get one in a natural setting (see first shot and the one below). 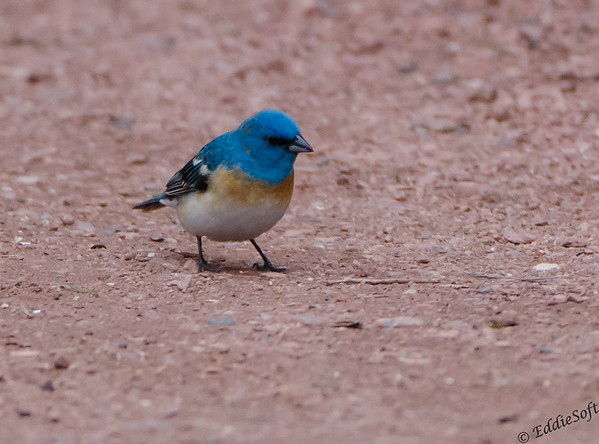 Better get to some facts – picture count running thin.  For that, we bounce over to our favorite birding reference site – Cornell.  First off, they do not come around my neck of the woods here in the Midwest preferring to spend their time out west.  Good thing we took the opportunity to catch the local wildlife while we were out there.  Every mature male develops a single song that can be a unique interpretation of other songs or taking the Vanilla Ice option, just cop a riff from another in the area.  They do tend to sound similar to the Indigo Bunting song which we have an abundance of in our area. Umm… that’s about it folks – pretty dismal on the interesting facts on this very cute looking bird.

Although Ron is always giving me a hard time about my limited angles when trying to ID a particular bird, this time I have all the angles covered.  Adding that last picture in just so you can experience what the back looks like on the Lazuli.  You might be tempted to think it was just a molting Indigo, but those white bars on the wings pretty much prevent that incorrect ID.  Very happy I was able to get this new bird in the tin.  There will be plenty more from Red Rocks in upcoming posts – stay tuned!

2 thoughts on “A Lazi Bunting”