Greetings everyone!  It has been a big weekend and I’m not just talking about the complete breakdown of the Democrat politiclowns that decided to jump the shark tank and try to claim Trump isn’t fit for office (Amendment 25 for those of you that don’t spend their days trying to undermine our government).  As my brother points out, we’ll just suppose Hillary’s concussion excuse for not remembering how to handle confidential information would equally qualify, but imagine that… no press coverage there.  No, the real excitement was releasing my kinder gentler website.  Apparently some of my post topics are considered a bit edgy for the masses, however, a broader audience has shown interest in my wildlife related posts.  After a bit of research, some valuable help from my brother Ron and a lot trial and error on the WordPress site, I was able to get something up there that looks halfway decent.  All my posts in their full glory will still be put on this site first, but now wildlife posts will also be distilled and put up on Wildlifeintrigued.com.  We’ll see how this goes and how much work it is going to be.  Will be nice to possibly expand my readership.

So, in tribute of that new chapter, I bring you a wildlife post… 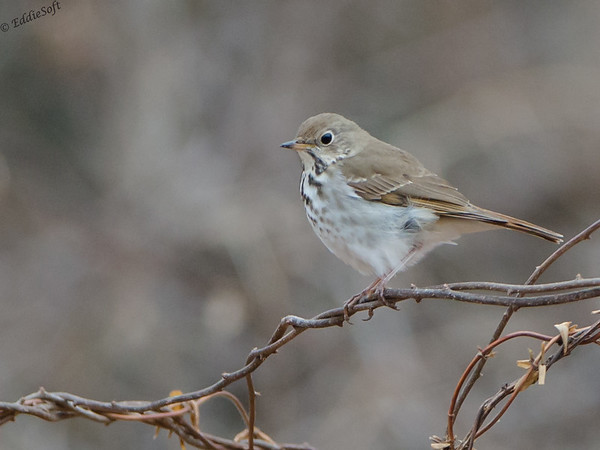 This cute little specimen was shot on a birding trip down by Alton Illinois back in March 2014.  My catalog system was slightly compromised because I put this up in the Birding Illinois gallery.  Technically we were birding Illinois until we went over the bridge into West Alton which puts us officially in the State of Missouri.  What’s a few thousand feet between birding friends hehehe.  While on the other side of the river we paid a visit to one of our usual spots down there – Ellis Island.  This is the first time I explored the trails at the end of the main trail from the parking lot.  Most of the time we entertain ourselves with the backwaters on the left side of the trail looking for interesting waterfowl. Little did I know there were some nice trails that take you through a nice variety of landscapes (wooded, clearing etc.).  This specimen was hanging out on some vines on the edge of the timber. 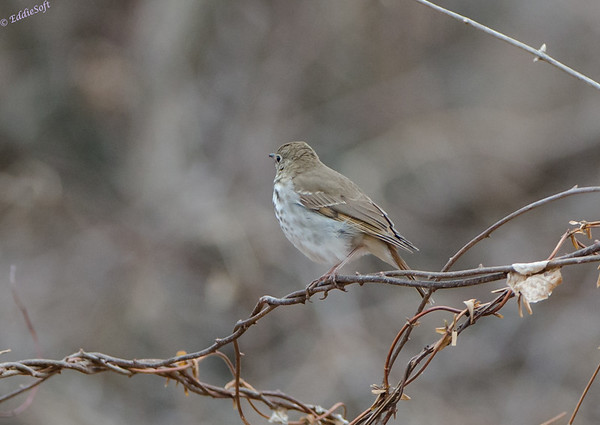 Now this little bird with its cute collection of spots and brown/white palette caused quite a hardship for me on the ID front.  My go to ID for brown birds with spotted breast is the Louisiana Waterthrush.  This is more born out of the fact that I DO NOT have a Louisiana Waterthrush than a real good grasp of the features seen here.  This is amplified by the fact Ron has a Louisiana Waterthrush and was able to get it in the tin while out birding with me – yours truly struck out badly on that day.  A quick verification on Cornell’s site confirmed what I already knew – no white eyebrow, not heavy enough streaks and too small.  Cornell then offered up the Ovenbird which looked a lot closer to this specimen.  Even the region looked good.  The problem was the lighter spots vs the more streaks of the Ovenbird.  The other options Cornell offered up as alternatives only got me further from the ID.  Frustrated, decided to thumb through the reference books – getting pretty good at knowing what it is not allowing me to cross over sections pretty fast.  Eventually a similar reference was discovered.  Light spots – check, light eye-ring – check although this one seemed pretty pronounced, brown/white coloring – check, multi-colored bill – check.  Then the tipping point – a reddish tail contrasting with the brown of the brown/gray body.  The first shot gives the best view of that feature – I’d say we have a match.  Not sure why Cornell couldn’t help me to that end.  Note, the reverse is also a stale path from Hermit Thrush to Ovenbird. 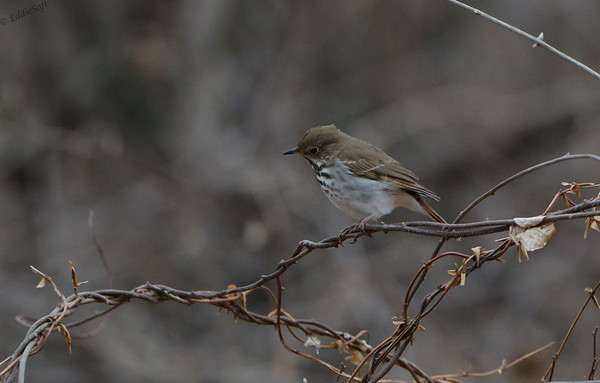 Thanks to Ron for validating this for me as well – always like to have a second opinion.  With the ID out of the way, I can get to some interesting facts (none too soon since we be out of pictures).  First off, their wintering grounds do come up through the bottom of Illinois so that aligns with our timeframe.  According to Cornell, they have a unique hunting technique they call “foot quivering”.  This consists of taking grass blades and shaking them to stir insects.  Oddly enough there also appears to be a regional difference in this species with Western (West of the Rockies) inhabitants preferring trees for their nests where the Eastern group tend to build ground nests.  Seems like an odd difference unless it is based on differing predators in each of those areas.  Not much else to relate.  Now just need to go add a +1 to my bird list – yeah!