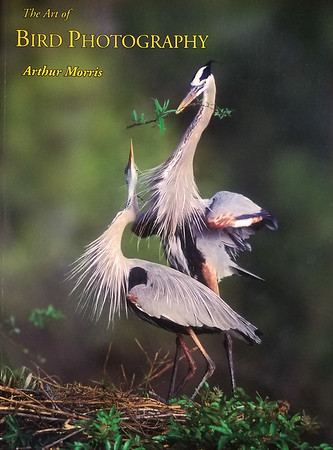 Today I bring you the first recollection of the young year.  Truth be told, I have been trying to get through this featured book for at least two years.  It has been all across North America as it is the book I would grab as my reading material on our cross country birding trips.  For some reason I kept getting sidetracked and would only get a few pages further regardless of how many days we were gone.  Luck would have it, I was able to FINALLY get through it while our recent trip to Texas – had a lot of driving time which gives plenty of opportunities to turn the pages … when Linda is driving, of course.  Do not make the assumption that the struggle to get through this book had anything to do with the quality – it is a worthwhile read, not overly technical beyond some detailed sections of exposure rules of thumb.  Even if you do not like reading, this book has some stunning photographs in it – absolutely stunning!  I find the better I get at photography, the more appreciative I get of the works from others.  Arthur Morris is a top notch photographer – add in the fact those pictures were done in film format is even more amazing.  I laughed to myself as he routinely mentions the thousands of film pictures he would take on a shoot – damn expensive in those days and huge separation along with glass costs between the professionals and amateurs like myself.

As a whole it did end up being a pretty quick read once I could dedicate myself to the task.  He reaffirmed a number of my hardened principles and gave me some things to think about and likely try.  At the end there is mention of a volume two available on CD that had the digital elements added to it – will probably pick that up some time too.  As a summary, I wouldn’t hesitate to take a gander at this book (may check out the CD instead for the digital aspects).  The shots are worth the time alone and will likely give you few more angles/options/poses to look for when you are out in the field.

In case you are wonder, this book appears to have been published back in 1998 with a large paperback version (the version I have) that came out in 2003.  Not sure if I ordered it special or got lucky when I ordered it, but my copy is officially signed by Arthur – nice little touch.  Hit the jump to see my takeaways.

2 thoughts on “Book Recollection: The Art of Bird Photography”