How’s it hanging out there.  Obviously we survived the first snow of the season but maybe just barely.  I did get to test my slide control skills coming down one of the larger hills on the way back from my run.  Not sure what was going on there, but my 4 wheel drive truck decided that the rear wheels wanted to race the front wheels down the hill.  Not a big issue for seasoned Illinois drivers – stay off the brakes, steer into the drift to get control and then accelerate out once you get it straightened out.  Easy peasy, but can get the heart a pumping if a car is coming the other way.  Good to get those control reminders out of the way during the early winter season.  By this morning, the snow was gone from the roads and just another day in the Midwest.

To help warm up the place, figured I’d throw up a post featuring a bird shot back in the summer months – June specifically.. 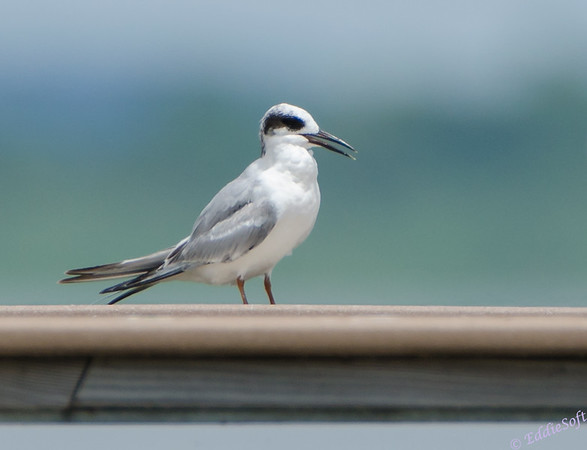 Just not last June.  You should know me better than that by now.  These shots were taken back in 2013.  Trust me, if I could get these out quicker I definitely would.  Wish I could hire an intern to go through all my pictures after a shoot, weed out the crap shots and present me with the shots to take into the digital dark room.  You’d think a UB would do that for me… WAIT A MINUTE… something just triggered in my head.  Not sure I even posted the results of the UB competition this year.  Definitely need to get on that stat!  For now, let’s enjoy pictures of this lovely Forster’s Tern.

Truth be told, when I was shooting this bird down at Emiquon National Wildlife Refuge, I wasn’t sure what I was taking a picture of.  All I knew is there was one bird that “was not like the others” hanging out along the pier.

It definitely looked skinnier than the rest of the Gulls hanging out in the area  and the distinct eye patch drew my attention.  Now the wings seemed to match almost exactly (at least in palette), so it wasn’t definitive.  However, since there was a chance it was a difference species, I tried to get as many shots as I could.  Here is one taken a little closer that shows the large difference in the overall stature, the bill coloring and as mentioned and the darker eye area coloring.  There was a chance that it was just a juvenile, but the dagger vs bent bill didn’t really support that theory.

A quick check with my brother Ron gave confirmation that this was not a Gull but indeed a Tern.  We had taken other Tern’s in the area so this wasn’t that strange, but this is the first time I had seen the non-breeding plumage.  Pretty cool bird and based on the interactions it was having with the other Gulls on the pier, a bad ass – although they may be the small occupant of the railing, they apparently  do not take crap from anyone.  Here it is issuing a string of vulgarities that would make a sailor’s wife cringe.  Guessing that Ring-Billed Gull (quick guess on what that other bird is) was stunned based on the gasp expression it was sporting 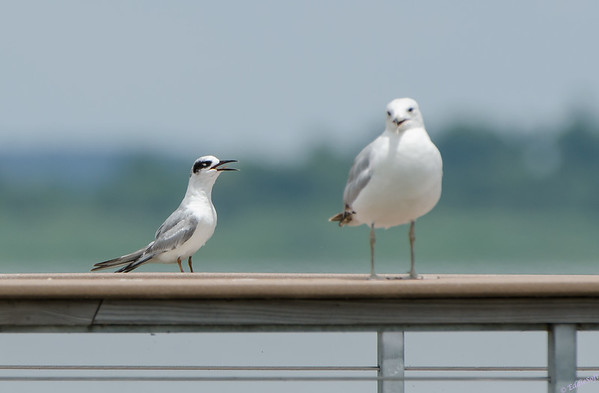 The next shot was a classic.  I took the little one’s expression as the Tern’s “drop the mic” response.  I’ll let you bask in the glory of my cursing tapestry while I preen my beautiful feathers.”  The resulting expression on the Gull is “who the hell does this sad excuse for a Dodo think it is?”  That or it just saw my glass pointed at it and started the mandatory “Mine, mine, mine, mine, mine.”

I need to leave you with some education points in appreciation for you taking your valuable time to spend with me.  Off to Cornell to see what they have about this new check mark in my NA Birding List. Looks like this version of the Tern is exclusive to North America.  Apparently these Terns will breed next to Black Terns.  I should have kept my eye open when I took those Black Terns over at Goose Lake (link here).  The Forster’s may have been hanging out there as well.  Eesh, that’s about all they have on this brash bird.

I had to go over to my friends at Wikipedia to learn how it got its name.  They claim it was named to commemorate the naturalist Johann Reinhold Forster – mystery solved!

All I have for you today folks.  Check back soon, since this is the last month of the year I’m trying to pop hurt the queue

2 thoughts on “A Forster’s Takes Its Tern”