Sorry folks, I forgot to wish everyone a Happy Halloween yesterday.  I had intended to get this post out on Halloween but I ended up getting too involved with this year’s pumpkin carving and lost track of time.  The pumpkin turned out pretty good and you probably already assumed details will be forthcoming in a future post.  I am a little strapped for time tonight thanks to having to deal with our well going dry, so let’s get right too it. 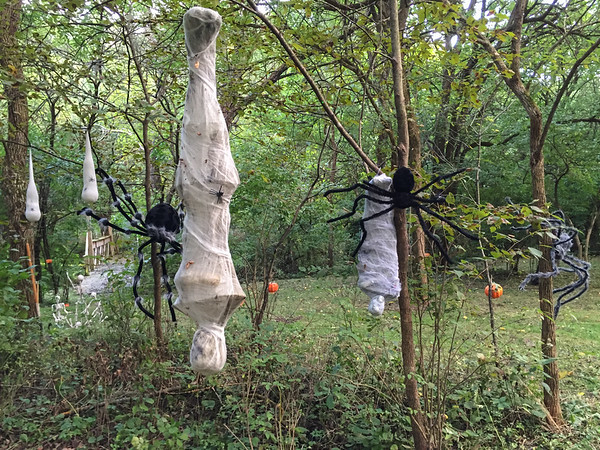 This is part 2 of this year’s Haunted Trail which I have affectionately called “They Sense Your Fear”.  Of course, the reasoning for that title will be a focus of a future blog – you should know how this gig works by now.  Part one of this series was all about the build part of the effort.  Tonight we will move into the layout phase.  Getting all the decorations down the hill is a big chore, but this part is where the fun and creativity come to bear.

Paul and I spend a lot of time laying out all the decorations to give the best experience for our guests.  One aspect is trying to make the trail a progression into terror. 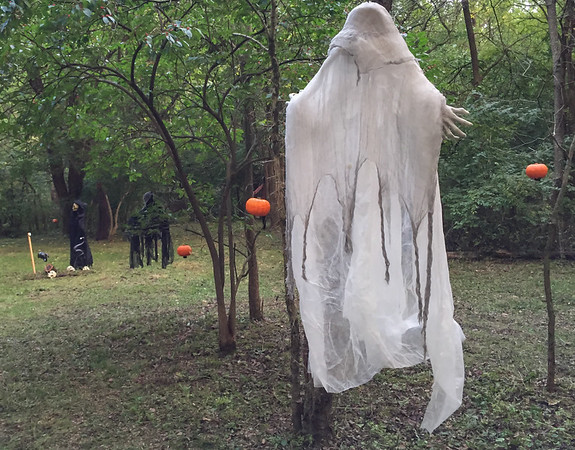 Hit the jump to see a bunch of pictures from the layout phase – many thanks to Ron for taking most of these shots.

Unfortunately, I do not have layout phase pictures of the first part of the trail – that is the area we put our tamer decorations.  There are a lot of blow up items that are fairly low keyed specifically focused to bring enjoyment to the younger visitors.  We always stress that it is the parent’s responsibility to determine how far they will allow their children to experience the trail… the deeper you go.. the deeper you sink into horror.

The parts you are seeing here are at the start of the second phase of the trail.  Lots of spiders, skeletons, skulls and other items that still are not too bad. Most of the children can handle this part.  Keep in mind this scene gets amped up a bit when you are walking around in the blackness of the woods.

Once through the more open area, you start progressing to the animated elements.  Most of the decorations in this part of the trail light up, talk, move or all the above.  It is hard to tell in these pictures, but we also put out a large number of carved foam pumpkins I picked up at the dollar store.  Cut out a scary face with a Dremel, stick a tea light under it and presto, a perfect pathway guide.  If you follow the pumpkins you will likely make it out safely. 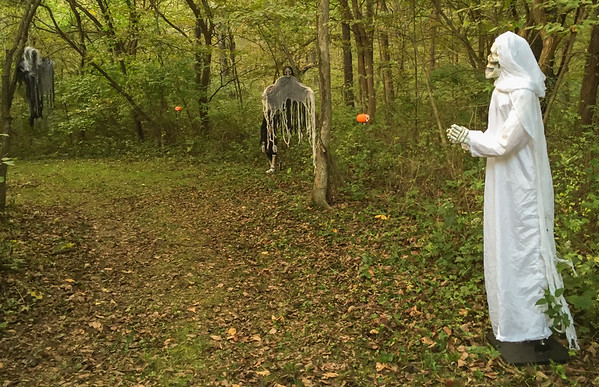 One struggle is to make sure we hang the decorations correctly – depending on the angles, if you don’t zip tie the decoration to the tree correctly you will end up looking at the boring side of an expensive decoration – a lesson learned through numerous iterations of cutting the tie wrap, turning the decoration 180 degrees and reattaching it.  Time is precious by layout time and these mistakes chew up valuable time.

Actually, some of these decorations look spooky even in the daylight! 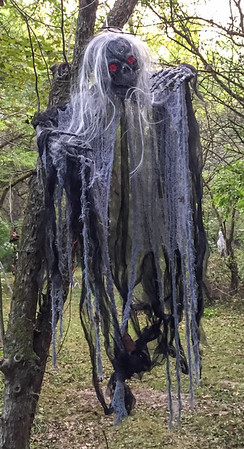 Although this one is exactly the opposite.  Simply looks like a guy that spends his summer days behind a computer.  Come night though this dude cranks up the voltage and provides a quite shocking experience – you will experience that in phase three of the post. 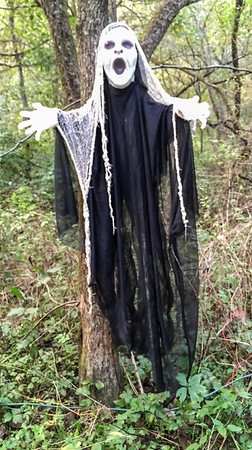 Like the one above, this next decorations was new for ’16.  Ended up getting it on sale at Menards.  Stands 6′ tall but frankly has a total waste of batteries for an animation – basically the eyes just light up.  I had Ron put it over a dip in the trail to help prevent injuries.  Not sure if it was deliberate or not, but by the end of the night, this skeleton looked like he was taking the opportunity to lighten his load…. if you get my drift hehehe.

This is one of my favorite decorations.  Not only does its eyes light up, but it shakes all over the place while raising and lowering those creepy wings..  I accidentally broke a similar one the week before as we were trying to put the sensors on it.

Ah, another new decoration for ’16.  At first I thought his was going to be a cheesy item where just the eyes lit up – reminded me of those little robed sand dudes in the Star Wars series.  However, when I pressed the test button in the store, it was  immediately put in the cart – it included really cool sounds.

This decoration frustrates me to no end.  I can’t count the number of times I have threatened to put it in the trash.  It is hard to explain, but the skull sits on a stake in the ground.  The connection point is really loose causing the head to wobble all over the place.  That would be easy to fix, but then the material comes up over the head and attaches to the arms so any compensation for the wobble just causes the stupid arms to flop all over the place.  Somehow it avoided the trash again this year, but a lot of work for something that basically just has a head that lights up. 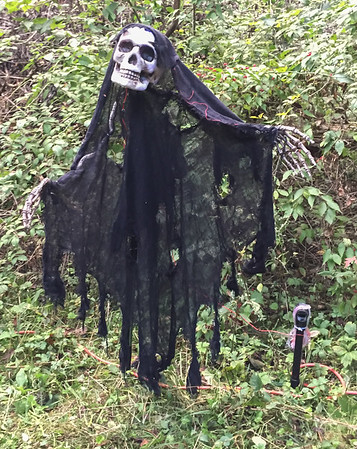 Here is our graveyard.  It keeps getting bigger and bigger every year.  Paul added a bunch of tombstones this year and we added some zombie stakes to add some additional creepiness.  Next year I plan on having a lot bigger tombstones (made out of foam).  I bought the material to make them this year, but ran out of time).  I might have to start on those soon if I want them done before next year’s trail!  (that sound you just heard was Linda producing a giant sigh)

This next decoration was a fine example of making the best out of a bad situation.  My woes with the tractor this year are long and painful so I’ll spare you the details.  However there was one issue I could not avoid – due to all the rain I was unable to get the tractor up our big hill before the party.  No worries, we just incorporated it into the haunt.  A lot of people commented they liked this decoration – apparently there are a lot of similar sick and demented people out there hehehe. 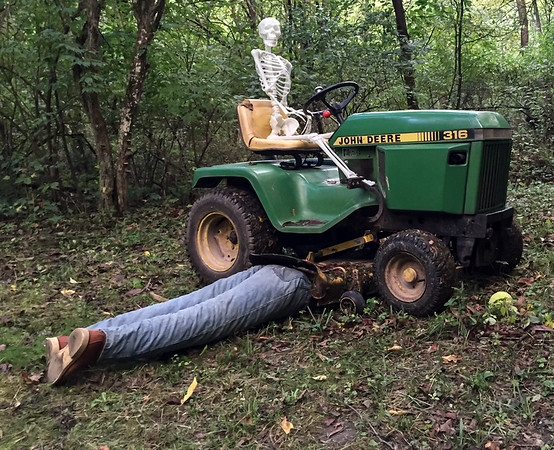 The next part of the trail is purposely tucked away in an area that isn’t marked very well.  There is a good reason for this… this is where we put our most disturbing elements. Since this is tucked away in between the main routes, the squeamish can usually escape without ever knowing it exists.  Now the bad thing is we probably left it a little too hidden this year since a few of our guests who wanted to see it (and the more hardcore of our guests) missed it completely – ended up having to take a few of them back down to show them since it contained the new Westworld Posey model. 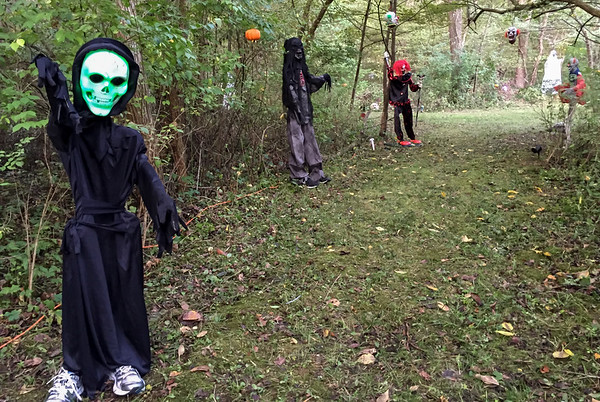 Note, we also put most of our clown stuff in this area because we know how frightening those can be especially this year ha!

Hey, here’s that creepy dude again.  Ummmm let’s hold off on the discussion of this particular decoration… (nothing to see here… carry on) 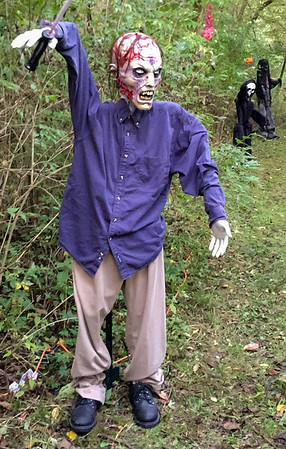 Once again, our Grim Reaper stood watch over the hidden trail.  This year it got a slight upgrade, but again I need to hold off on that detail for another post … BIG HINT … the name of the trail pretty much tells it all.  You shouldn’t be looking at the left side … 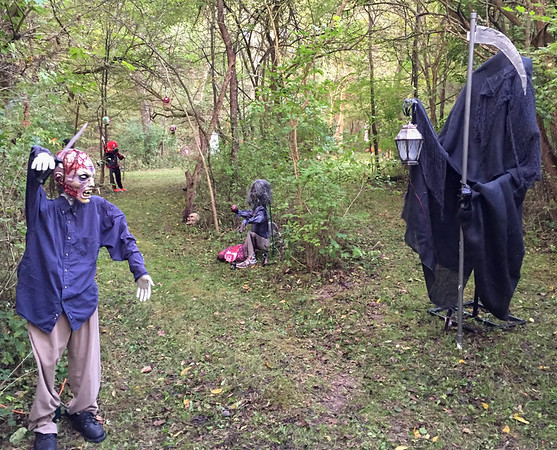 Stop staring at that … stop it …. holy crap, I think it just moved 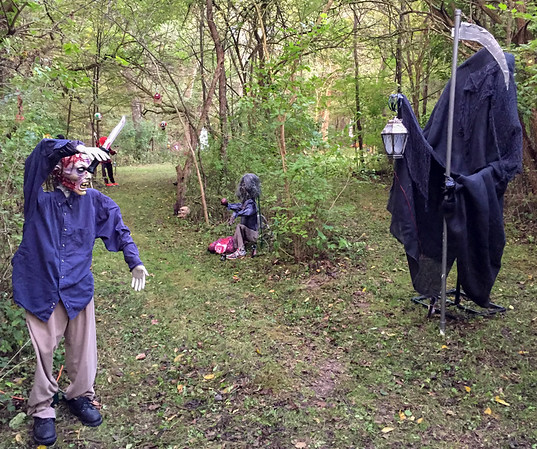 Remember that Posey form that didn’t cure correctly… you remember, the one I was spray painting with suspicious pink and red spray paint… well, here is the big reveal. 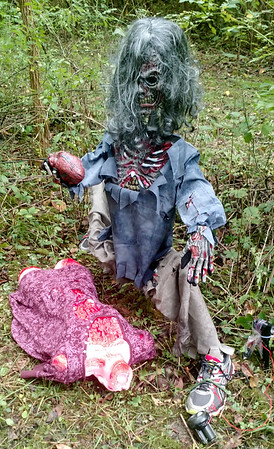 I must say, this did get quite the reaction from those willing to trek down the hidden trail.  I thought it was a clever use of a mistake – lemons to lemonade is what I say.  Note, I did ask Linda if there was a shirt she could donate to the cause.  It felt a bit ummmm… well… ummmm… let’s go with chilly in its natural state.

I found the heart at our local Spirit pop-up store. Always a good feeling when you have an idea you are actually able to bring to reality.  I built this using the pre-16 Posey enhancements so it looks a little thin from the side.  Next year it will be retrofitted with the ’16 features and maybe add …dare say … some movement – c r e e p y.  Oh, and Ron also added a red gel over the spotlight to really bring out the blood – does Mom know about this side of you!?!

Of course, the creepiest decoration we have took its position at the end of the gore path.  Just noticed this was taken before we fixed the sleeve.  Kind of looks like all the flesh has been torn off its arm.

Excuse me, I need to step away from the computer a bit .. I am starting to shake and need some air.

Okay, I’m back – whew, that was close.  This year I also added some dead flamingos I picked up at Party City.  They were originally targeted for a wheelbarrow of death scene I used last year, but decided to go a different route with the skeletons this year – no worries, just put them next to my cloaked skeleton display. 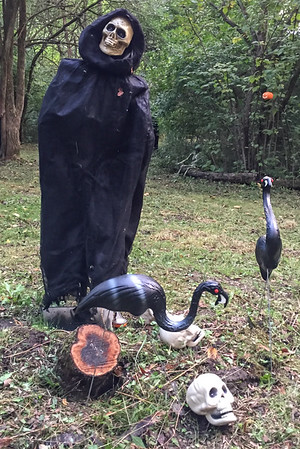 It also served to keep people from tripping over a stump that was left after having to remove a fallen tree earlier in the week.  Here’s a wider shot looking back at the section we started this post with.  Probably a good time to mention all these trails had to be mowed the day before the party… which takes a healthy chunk of time.

Another part of the trail.  This one leads to the flaming pumpkin.  Since all kids like fire and nothing tops a fire inside a pumpkin (in my humble opinion), we pull back a bit on the scary decoration in this area so they can get to it without too many future nightmares.  Note, this area is pretty dark so kids tend to walk right by the hanging amputated body decoration. 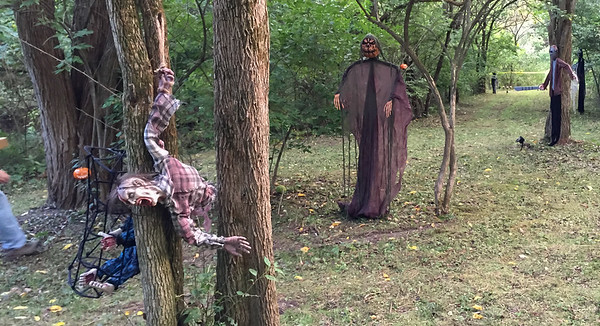 Per my previous comment, I opted not to go with the previous wheelbarrow skeleton display.  I had used that two years in a row and wanted to mix it up a bit.  Thanks to Target having reasonably priced posable skeletons, I was able to pick a few extra ones up.  There was another dip in the trail here so like the previous skeleton placement, thought I could incorporate it for  extra safety. 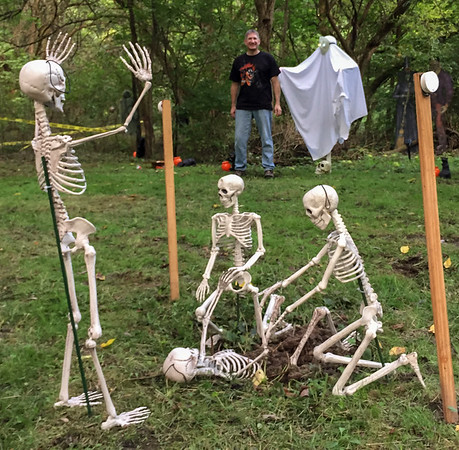 Just put a skeleton in the hole, put some dirt over it and then positioned a couple of skeletons so they looked like they were pulling it out of the ground at the command of Lord Skeletor standing over them.  I added a few LEDs to enhance the effect and presto – a new creepy scene for ’16.

Well, those damn Cubs won again – time to cry in my pillow.  Hope you enjoyed the Haunted Trail in daylight – I’ll let you experience the dark woods soon enough.