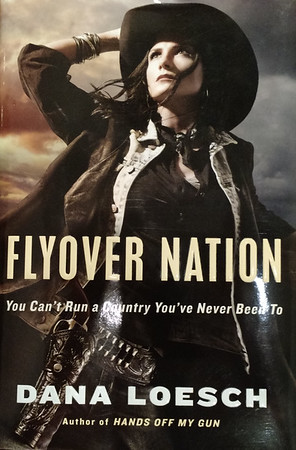 First off, I’d like to congratulate my mother for kicking the crap out of the big “C” – we received excellent news today in stark contrast to what we were expecting to hear based on a pre-appointment call she got indicating bad things were occurring.  Apparently someone got their signals crossed on the communication.  Regardless, we are all extremely happy for her – way to fight it out!

Now on to today’s post featuring a new book recollection.  This particular book is called Flyover Nation and it was written by Dana Loesch.  A friend of mine lent me this offering (actually the same one who let me read his American Gun (link here).  Much like the Kyle book, this was a quick read – think it took me two days while traveling in the car to various places.  I had high hopes for this book especially since it was mentioned on a number of conservative outlets I frequent.  Unfortunately, it fell short of those lofty expectations by quite a big margin.  The book really doesn’t flow very well at all.  One minute she is discussing the merits of the Midwest and the next thing I know she is backhanding a fitness company because they do not have her favorite work out device.  The concept for the book is intriguing, although there may be some bias since I often catch myself looking up at the large jets passing over god’s country to their steel havens on the coast.  We do have a different mentality in the Midwest and contrary to every pseudo reporter at the biased liberal media machines – it isn’t the same values held in New York.  Cruz was right, but his decision to bring it out then was a foolish mistake.  We like our guns, we like nature and most of all we believe in SMALL government.  Dana attempts to bring these key differences to light, but often resorts to over-simplification, generalization and quite frankly overused stereotypes – yes, Dana, there are many who put more than one r in our washers, but generally keep that in check when talking to anyone outside our circles.  Based on the takeaway section below, there was quite a few tidbits that were worth noting from the book so it wasn’t wasted time.  The part that bothers me the most is she admits that she was an outspoken Liberal in her early years but then had a child and suddenly she found the conservative light and became a champion for their values.  So basically, when the left values no longer favored her, she jumped ship.  Congratulations for coming to your senses, but you have a lot of ground to make up before you come to the level of people born into strong valued communities, raised by high integrity parents and openly embraced all of her newfound conservative ideals at a tender age.  Add in all the axes she is still harboring to the other scattered topics and it just seems to lose a lot of its potential luster.    In summary, if you live in or at least from flyover country I’d probably put this deeper in your stack of reads.  If, instead, you think the Midwest is just a bunch of irritating hours before you get to the posh coastlines – then grab it for your next plane right – you might get a better understanding of who really makes this country the best in the world.

Hit the jump to read some of the key elements of the read.