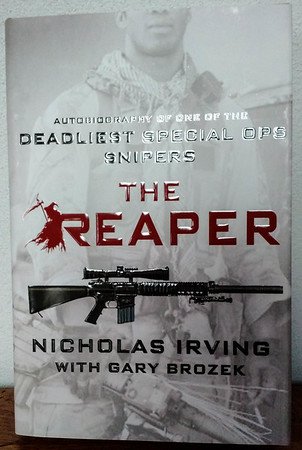 Two months into the New Year and this is the second book recollection.  What’s next, 50 degrees out on the last day of January!?!  Oh wait, it was 50 degrees out yesterday here in the Midwest.  Strange times people, strange times.   Last month I brought you a recollection of 13 Hours which recounted the attack on the military/CIA in Benghazi.  Today’s featured book also has a military theme to it.  It is the autobiography of one of the 3rd Ranger Battalion’s deadliest snipers in Afghanistan during his 3-4 month stint from May to August 2009.  The book is by Ranger Nicholas Irving along with Gary Brozer and recounts his time when he set a record for most sniper kills in a single deployment.  Apparently, Chris Kyle has the overall, but Irving has the time element.  His tally, 33 confirmed kills.  During the course of this effort, he became known as “The Reaper” by his fellow solders for his effectiveness and contribution to keeping those in harm’s way as safe as possible.

From a book perspective, it is a fairly fast read.  I liked the conversational approach to the autobiography as it is written in a manner that is easy to understand even if you have not spent time in the military.  I thought the authors did an excellent job of conveying the stress that comes with the job and just enough technical details that you feel like you are coming away a little more educated on the life of a sniper.  Having previously read Kyle’s book (link here), one thing stood out in stark contrast.  As mentioned in that review, I got a strong feeling that Chris was pretty arrogant.  Don’t get me wrong, I agree that would clearly be a byproduct of that career and possibly a requirement to accomplish what he did, but that really stuck out in that book.  Contrasting that with this book, Nicholas really put his ego on check even recounting numerous times when he had made a mistake in judgement (luckily those didn’t get him killed allowing him to learn from them instead).  He also featured his sniper mate Mike Pemberton, the interaction between them during a mission and even some of Mike’s heroic moments – him falling in an 80ft hole that extended into another 40ft of water still haunts me since it is one of my biggest fears of being confined in the dark with little hope for escape.  I refer to him as mate rather than spotter since Pemberton was as much of as shooter as he was a spotter – first time I have been exposed to that type of sniper team relationship.  In summary, I thought the book was a good read.  It was pretty fast to get through – think it took me only 5 or 6 sessions to make it through – again, the conversational feel contributes to the easy flow through the book. Hats off to Ranger Nicholas Irving for serving his country with honor!  May your government never forget your contributions or let you down if you ever encounter times of need.

Sorry, Blue Oyster Cult – you got it wrong – you need to “Fear the Reaper”.

Hit the jump to see my takeaways from the read!

4 thoughts on “Book Recollection: BOC Got it Wrong”