It is time to officially close out the 2015 Halloween season.  As a last tribute to my favorite holiday I bring you this year’s pumpkin carving.

Unlike most years, this one didn’t utilize half cuts due to two key reasons.  The first reason is basically time.  I’ve been revving on high for a while now to get through the party and now back to finishing up Project Auurrrnnoooollld.  I am so close now I can taste it – only two real tasks to go and I can finally bring you the fruits of that multi-year labor.  The other limitation was a poor crop of images to select from.  If you’ve seen my other pumpkin posts you know that I mine every source  I can find looking for a high contrast images to use as a basis for my carvings.  My favorite web resources are Tattoo sites and, of course, Google Images – this year … not much turned up.  Luckily this popped up while looking at a Pinterest board for Halloween props. 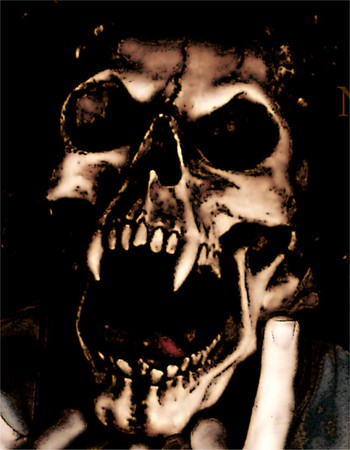 Finally something to work with – before I go any further, the rights for this image remain with the owner (unfortunately not sure who that actually is).  Okay, back to your regularly scheduled programming.  This image has the perfect combination of creepiness and … CONTRAST which is essential for a good transfer to a pumpkin.  For a quick test you can simply bring it up in your favorite graphics program and reduce the color count to 3 or 4.

Hit the jump to see how this turned out in pumpkin form!

That looked very workable.  Unfortunately, the reduction really didn’t pull out a good mid cut level that added much to the overall image.  That is the reason I reduce to 3 or 4 colors in an effort to get some mid-tone differentiation.  No worries, I wanted to try out a new method of making full cuts this year so this would provide plenty of chances to do that.  The next step is to clean the image up by hand – removing unneeded detail and making sure it is a valid pattern.  I am seeing a lot of pumpkin patterns on the web as of late that are bogus.  If you can see full cuts (white) all the way around any portion that is black – they are faking it (note, I am not talking about half cuts, those are fine).

2.5 hours of cleanup left me with the final carving pattern.  Here it is in faux-carve

Of course, pumpkins are done in negative so a quick reversal of the blacks to white and the yellows to black produces the final pattern.  This is one of those rare times when one of my patterns actually look somewhat like the final pumpkin product – for example, the 2013 Crow always puzzles people until I light it up (link here)

With phase 1 out of the way, time to move to phase 2 – transferring the image to the pumpkin, or more accurately, the fake pumpkin.  I gave up the real ones years ago – too much effort for something that pays you back for gutting it by rotting all over your doorstep. A few clips there, some tape there and were ready to complete the transfer. 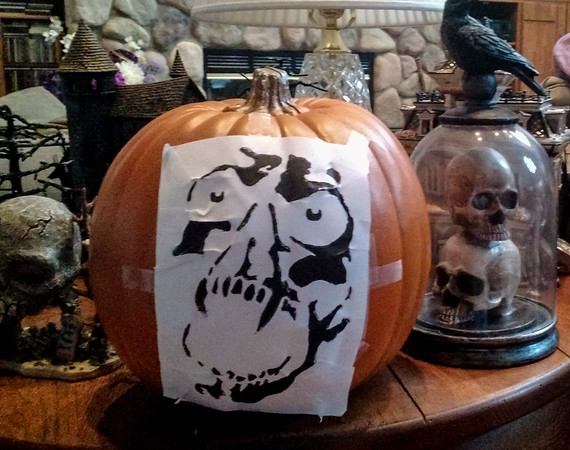 This year the tool of choice was a fountain pen.  There are a number of ways to do this from poking holes and coating in floor to actually cutting out the blacks – both take more time than I had.  The pen is quick and easy but only leaves an indentation in the pumpkin – you have to quickly go over the lines again after taking the pattern off.  Press hard boys and girls or this method will leave you a hot mess to work with.

Overall, not a bad transfer – this is the point where you find out your problem areas – if you can’t draw the pattern.. you can’t carve it.  In those cases, just do a little modification when redrawing the pattern – widen it or remove detail as needed (guarantee no one is going to know and the image will look just fine).  Oh, and one last final check to validate the pattern – watch for full black cuts that surround white. If you get to this point and see that, simply build in support bars to any white area.

This year’s new tool is a hot blade cutter that Linda got me for Christmas last year.  Super cool!

Basically it looks like those old wood burners but instead of the thick burning tip, they replaced it with a heated Exacto blade.  Let me tell you, if you like carving foam pumpkins… GET THIS TOOL IMMEDIATELY.  I could not believe how nice this thing cut with zero pressure.  Nice clean cuts.  As far as limitations go, it is only for full cuts and the blade has some width to it so turning in tight places is not easy – in those situations you can use the scroll saw technique and cut into the corners at various angles or cut inside the line and come back and just slice out the extra areas one little bit at a time.  In these cases I just went back to my trusty Dremel with the straight blade installed.  With this pattern,, the teeth and eyes were exclusively Dremel, but the rest were all hot knife.  One major benefit of the knife is the complete lack of dust that is generated!

Here is the final cut product – hard to tell from the photo, but this was the cleanest cut pumpkin I’ve ever done thanks to the new tool (thanks Linda!)

For the blog shots I just put a tactical pen light in the back – we use Dept 56 lights for our official display.

I should have taken the picture at a slightly lower angle.  The pumpkins sit high up in our dormer windows so I tend to push the pattern a little lower on the pumpkin since that is the angle they will be viewed from.

There you go, The Doerfler Pumpkin Carving for Halloween 2015 (this year carved on Halloween day!)  Next year I’ll devote more time to finding a suitable image (with mid-cuts for sure), but think it turned out rather nice considering how rushed the overall project was.

Here’s to next Halloween – already working on my new Posey animations.