It is a sad day in the LifeIntrigued household today – Some consider it the start of the Black Friday month, but around here it signals the end of my favorite month.  Why is that our favorite month … because it has Halloween of course!  To be more specific, it is the month we get to transform our house and woods into a celebration of the darker side.  The Haunted Trail was built once again for the enjoyment of our Annual Halloween Cookout.  Like previous years, the trail will be featured in an upcoming post.  Unlike the past, there’s a special treat this year.  Thanks to my brother we have pictures of the build process for the first time ever!

Every year we strive to make the trail a little better – a little more scarier, a little more to experience.  Those new items are generally purchased during the  previous year’s Halloween markdowns (pretty sure I’ve not paid full price for most of my items – hit Menards, Spirit, Halloween City the week after Halloween and you can find some nice deals – just have to wait a year to enjoy them).  This year we rolled out all the new Posey’s that were constructed during the Winter months (link here).  – by rolled, I literally mean rolled hehehe. Ron thought the pile of dead guys in the cart looked spooky on their own – luckily we didn’t have to explain ourselves to any strangers.

The entire process of building the trail takes about 6 days.  The first day involves cleaning up the trails themselves.  Wandering branches are pruned, obstacles like hedge apples removed for the safety of our guests and probably most appreciative is the thorn bushes are cut back to prevent any unwanted bleeding.  The second day is trimming all the weeds on the trail themselves (the trails is too steep in some locations to get a mower in so that is all done by hand with a gas powered weed trimmer – this takes 6 to 7 hours to complete.

Hit the jump to see how the rest of the days fall out.

The third day is reserved for chainsawing any downed trees and the time consuming process of mowing the bottoms.  This hit an extra snag this year because my brush mower stopped working putting a kink in the schedule while it was getting fixed.  The bottoms usually take about 3.5 hours to get done but this ended up being stretched into the fourth day thanks to having to build a bridge to get the mower across a gully that managed to widen from about 3 feet to 8 feet thanks to the torrential downpours earlier in the year.  I’m getting good at building bridges so with Linda’s help we bought three 4x8x3/4 treated plywood sheets, and 6 10′ 4x4s along with metal brackets to build the bridge foundation.  I ended up driving the truck down the hill with all the lumber and building the bridge under the flood lights in the dead of night on the third day.

With that constructed, I could get all the mowing done on the fourth day. The fifth day falls on a Friday and usually take that day off due to all the work that needs to be done.  Keep in mind that I’m just describing the trail work – there is equal amount of work going on to get the main yard ready for the cookout and of course all the house decorations.  Linda did yeoman’s work this year and did about all the interior decorating – I just had to do the ladder work for all the pumpkins and other items that we put up on our dormer windows.  Due to commitments I was only able to take a half day this year.  This day is primarily focused on getting the decorations out of storage and all the batteries checked and installed – work takes me well into the early morning hours (this year I hit the sack at 3am).

The day of the party is the hard day in the process.   The early morning hours are focused on the safety elements and hauling what I can down to the build area.  The ATV in the above pictures is the workhorse for that activity and when it is down .. life gets difficult.  This year’s 6th day started out difficult – the ATV refused to start even though the battery had been charging all night as a precaution.  Crap.  That resulted tearing the ATV down to get the battery out and then making a run to a local dealer to get a new battery.  That process put me back 40 minutes.  40 minutes which you will learn I could have used.  With the ATV back working I went about cautioning off dangerous areas (and there are plenty of them in our woods – steep drop-offs, water hazards, head banging opportunities etc.)  All properly cautioned taped off to make sure all our guests only come away with scares and not scrapes.

This year my partner in haunt came over around 11pm – 2 hours earlier than usual.  His decorations completely fill his truck inside and out.  All of those are ATV’d down near their planned spots while he lays out all the extension cords.  Trust me, there are A LOT of extension cords that power this trail.  All take a single feed off an external house outlet allowing us to turn the trail off by unplugging one cord.  I now have a generator that we didn’t end up using this year – next year this will probably be needed as the trail has grown tremendously.  From a trail design perspective, we start it out very tame and build it up as you go further.  This allows the kiddies to enjoy it to a level they are comfortable with – although we consider tears a badge of success, we leave that up to the parents.  I have to thank Paul for handling about all of the tame side along with his portions of the scarier parts further down the trail – That loss of 40 minutes kept me from getting to my blowups on that tame side so a huge relief when I found out Paul had already taken care of it.  Note, the picture above was taken probably around 4pm – the fact I was still smiling is contributed to how much I enjoy doing this,  however, by then the body was totally exhausted.

Until about 2pm we worked together non-stop on getting what we could built – each focused on creating new experiences for our guests to make it better than last year.  Those things that worked are replicated from last year and others were improved with new poses or positioning.  Around 2pm new help arrived!  My brother Ron was able to make this year (been trying to get him here to experience the trail for years) and he even offered to come early and help us build – we NEVER pass up help and very appreciative of the offer.  He picked up the concept quickly and jumped right in setting up the decorations.  By then we were ready to start putting up the intricate stuff like the Posey’s and the Reaper below.

Ron was able to help me get them dressed as I worked out some design issues that caused us to make some changes in the field.  The newer Posey designs with the couplers worked a lot better than the early designs.  I gave up on two of the old ones and went with the newer ones.  I’ll transform those and get those back in the game next year.  There is one part of the trail we put the scariest stuff in – it is isolated from the others so the kids can be shielded from them if they can’t handle it.  That path has all the Posey’s that were motion lighted this year along with the severed heads and shiver .. clowns.

The motion sensors worked quite well!  I need to work a bit on one, but the Posey’s would light up when you got close to them.  The ultimate plan was to  have the animations completed this year, but I didn’t get to those – NEXT YEAR FOR SURE!  The other thing I didn’t get to the day before was building all the hands for the Posey’s.  Ron and I ended up zip-tying the gloves on and they ended up looking okay when it got dark. 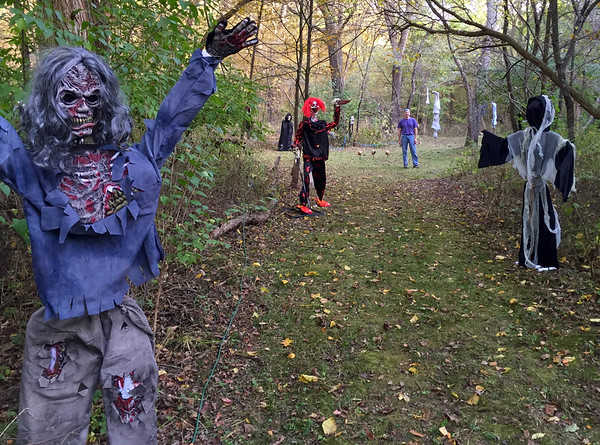 Although the guest may not exactly realize it in the dark, but they are pretty much led through the decorations in a specific route.  We accomplish this by making sure we have decorations in the middle of paths we do not want them to take and generally make sure we have the decorations pointing in the direction they should go.  Again, the guests may not pick up on it, but it is subliminally very effective.

Even with the early start from Paul and the extra help from Ron, oh and even help from my nephew who chipped at the end .. I was still late in getting the trail opened.  Guests were arriving and we still had not cleared the boxes, started the fire or finished putting up the trail lights, tea-lites in the decorations and some final finishes.  Another big thanks for Ron and Jeff for taking over putting the finishing touches on while I turned on all the decorations and started hauling the extraneous stuff back to the garage. 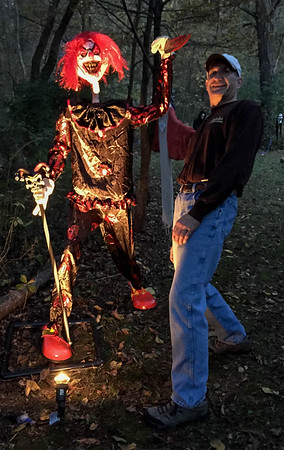 Next year we might have to start setting up on Friday and push the prep work up another day.  All I can say is I hope the weather gods cooperate as well as they did this year – we could not have asked for a better night in October to have our party.

Stay tuned for the next installment – it’s gonna be a phototastic post!  Thanks again to Ron for taking all of these shots on is iPhone during the hectic build phase.