I am very diligent about keeping my career isolated from the meanderings here at LifeIntrigued.  That will never change and besides this endeavor exists as a small break from that busy world.  With that stated, I will say today was one of the toughest days I’ve have ever had in that other world – one I will likely not forget.  But enough of that, let’s get to something far more entertaining – pumpkins, kerosene and toilet paper.  How  can you go wrong with that combination.. hint.. You Can’t!!

Unlike most of the posts on this blog, this particular one has very little direct influence by me.  I didn’t carve the pumpkin, I didn’t prep the pumpkin, I didn’t light the pumpkin and I didn’t even take the pictures you are going to see on this post.  Nope!  For those keeping score, I did do all the photo processing and banged out the words you are reading so at least there was some form of contribution.  A couple of weeks ago, the DoeRybarNerFler Haunted Trail was once again on display.  The details of this year’s epic endeavor will be coming at you soon – that annual post requires a lot of picture processing I have not been able to get to in these recent hectic weeks. A new feature for this year’s trail was The Flaming Pumpkin.  It was considered last year but fear of lighting up the woods scared me away.  This year a 10 page risk assessment was created, firefighters were brought in to assess the threat and a crew of highly trained forest fire jumpers were hired to stand watch over it.  My friend Paul was really the brains behind this fiery decoration based on a video he had seen on YouTube last year.  I must say, that video was amazing but still skeptical it worked as advertised – guess what – it works EXACTLY as advertised and man it is cool.

LifeIntrigued Disclaimer: NEVER DO THIS – NEVER, NEVER, NEVER, NEVER.  This is extremely dangerous and you WILL get hurt if you try it.  Are you thinking this might be good to try – WELL STOP THINKING IT NOW – I mean it – don’t make me come over there.

Okay, with the lawyers satisfied, back to the regularly scheduled programming.

There isn’t much too it – you carve a medium to large size real pumpkin – let me stress that again a REAL – DO NOT TRY THIS ON A FOAM PUMPKIN.  As a note, feel free to spend as much time on you carving as you want to, but do not get to attached to it – at the end of the night that pumpkin will be ready for the trash.  Carve the pumpkin in traditional fashion, you have to have a bottom in the pumpkin capable of holding liquid so don’t bother with any of those fancy pants methods that core out from the bottom.  Take it to a safe place free of flammable items and establish a safe zone with at least 4 large rolls of bright yellow caution tape.  Fill the bottom up with what appears to be about an inch or two of kerosene.  Take a full roll of toilet paper (your choice on the ply) and place it hole vertical in the center of the bottom.  Let it soak up some of the kerosene and then tell everyone to get like 40 feet or more away.  Find a large stick and then duct tape another long stick to that followed by another duct taped stick with a match on the end.  Anything less than 8 ft will jeopardize your eyebrows.

Once those steps are followed exactly, you can light the toilet paper – stand back and enjoy a flaming paradise for about the next 2 hrs.

So there you go, not much to it right?  Truth be told, I could watch fire for hours.  Something about the flames are mesmerizing to me and drives my imagination to new levels.  Much like clouds, the abstract and random shapes produced by the flames drive the mind to associate to physical representations.  Hoping this isn’t just me that has this experience – if so, please let me know so I can schedule an appointment and get checked out.  In the meantime, I thought I’d post some of Linda’s fine work and give you insights into what physical forms it takes in my strange  (straight from my 7th grade teacher – honest, ask my brother) mind.

Let’s start with my favorite one – for each I’ll let you view it and then I’ll give my perspective afterwards – interested in hearing how far off, close etc. we are in the comments 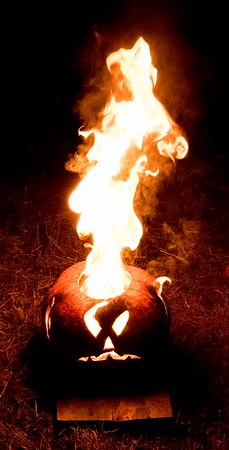 So this one to me looks like a ghostly figure at the top of the flames in a hood.  It is facing to the left and the hood and cloak are formed by the whiter parts of the flame.  The flame has two eyes and a nose set into the hood.  It has the left arm straight out towards you and the right one is hanging down closer to the side.  I’m probably going to have this one printed I like it so much.

Once again I see a ghastly figure rising up out of the flames.  The head is dropped down a bit into the body with the main column with two arms raised up in a scare posture.  It also kind of looks like a small head in the upper right part of the flame with the hair outlined in white and the eyes and skull face in the darker orange.  Keeping with that theme, there is actually a pumpkin then in the air above it turned to the right – you can see one eye and a smiling mouth – contrasting nicely with the grumpy cat carving on the pumpkin itself.

By this time the flame was in full force (and the forest jumpers were getting a little anxious). 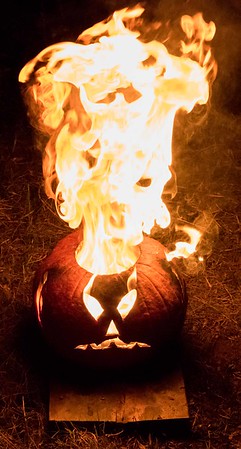 This is d0uble picture for me.  On the right side near the bottom is a face looking to the right with a longer drooping nose.  The flick of flame further to the right look like a hand with a finger beckoning the unsuspecting victim.  The left side has a skull of an animal (almost goat like) with the eye and then the nasal holes down lower just a bit higher than the nose on the right side.

I see a face in the very middle but it is difficult to describe if you don’t happen to see it right away.  Look in the middle of the flame and you will see an eye (darker patch in the middle of the white).  If you follow that eye to the nose down and to the right and just a bit of the left eye showing.  The mouth, of course, follows below that.  This one is a loose association so interested in reading what you see.

This one is more whimsical for me.  The little Gumby looking dude with his right hand up and left out to the left at the top.  It looks as though it might be kicking the @#$@ clown like figure with the two horn ears and ball nose  a bit lower to the left.  Lastly there is a stuffed toy frog in the middle on the right side.  You can just see the two eyes on the face and the two front feet below it.

another one for your imagination pleasure… 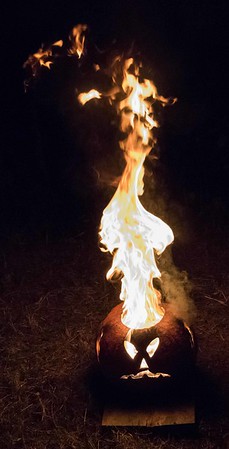 Back to the darker side now.  The skull in the upper portion is really apparent to me.  Two eyes, the nasal passages and a gaping mouth emerging from the thinner funnel of the flame.  It could even expand into having horns with the two extensions on either side of the skull – this vision may be spurred on by the fact I have carved a pumpkin that almost looks exactly like this.

Now for some scary shit…

If you didn’t see a court jester in those flames then you have clearly been brainwashed by the evil clown consortium.  You can see the bulb nose facing to the left, the jester hat even ends in a bell down the right side.  I already have the heebie jeebies and I haven’t even made it to the next one

Clown anyone .. hell yes, that’s another clown complete with red nose, proving once again all clowns come straight from the flames of hell.  I’m leaving the next one for one main feature..

the little demon crawling up the right side of the pumpkin says everything.

That’s all I have for you today.  Hope you enjoyed releasing your creativity.  Thanks again to Paul for setting this all up on the trail and to Linda capturing some very cool shots.  Not sure what is a bigger relief.  Making it through the day intact, getting through picture of clowns or knowing that I made the quota for the month.

By the way, I was kidding about the volatility of the fire – kerosene is a very controlled burn and easy to work with.  For the record I did hear there was some grass burning involved before the end of the night.