In the final week and three posts to go!  Thought it was good time to give a break on the bird posts – a short break, but still, some relief for those out there that prefer their birds on a plate.  Today’s post was prompted by last Sunday’s big step in my running career.  For the first time ever, I finally crested the 20 mile mark on a training run.  Damn near killed me, but a notch is a notch.  One of the things that keep me going on long runs is thinking about blog posts.  This particular one was helping to motivate me through the hell my body was going through!

For the second Sunday in a row I was breaking personal running records.  Yesterday was a distance record, the previous Sunday was a speed record.  As you can tell from the swag above, I ran the Peoria Half Marathon a week ago.  This was supposed to be a final warm up before tackling a much bigger endeavor planned for the end of the month. The intent was to go out at a comfortable pace and simply relax to the end – slow and steady and more importantly, not cause injury to anything that would jeopardize a bigger goal.  Well, that was the plan.  The morning started off as an answer to a runner’s prayers – it was downright cold out.  We left the house at 29 degrees!

No worries about overheating that day.  I even decided to pull out the tights knowing it wasn’t supposed to break 40 until after my expected finish time.  My training partner Ryan was toeing the line that day as well – he prefers to run a lot cooler than I do as you can tell by his attire.  A hat and long sleeves means it is definitely cold out for normal people.  Linda was complaining I was not smiling in this pre-race shot.  Wanna know why –  I WAS SHIVERING.   Luckily my grimace was countered by the happy photobomber hehehe.

Hit the jump to see how the frigid start turned out!

We timed the start perfectly.  From the time we left the Civic Center and made our way to our starting location we had to stand around for all of 2 minutes before the announcer gave an unenthusiastic “ummmm go”.   Right before that I asked Ryan what he was shooting for – 8:30’s was the response.  I responded with my planned conservative 9:00’s.  We were lined up around the 8:45 mark per the pacer signs we could see.

Linda was able to get a start shot.  I had to go back and check one of the bibs above out of complete curiosity. The name turned out to be a female but this was definitely under question in the shot above.  She ended up winning the women’s marathon and to her credit she looked a little better at the end than she did in this shot but talk about scary.  I also cracked up at the little kid on your far left.  That dude was on a mission up there with the elites.  In complete contrast to those serious competitors, I bring you my start disposition. 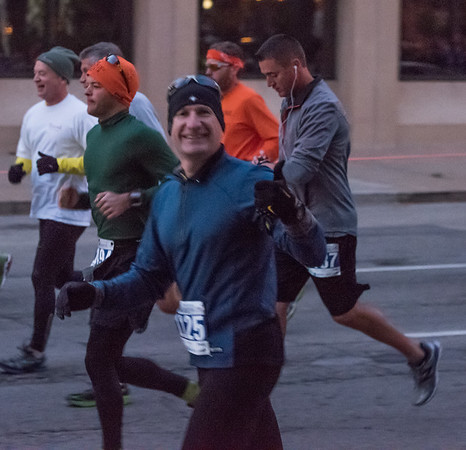 At least the guy in background is having almost as much fun as me.  You tend to forget about the cold once the legs are churning away.  Oh, and you can see I’m not the only one that went with the warmer gear.  In the following shot you will notice that the early pleasure was giving way to discomfort.  There is a primary reason for this – is it because it was cold out .. nope, is it because of injury … nope.. the answer is my good friend and training partner is A LIAR!  That’s right folks, it seems my buddy’s projection was total crap.  That’s right, I said it.. a total figment of his imagination.  You see, the moment below is roughly 3 miles into the race.  You will also notice Ryan is nowhere to be found – in fact, he is ahead of my by about .2 of a mile.  I hung with him for the first 2 or so miles until he started to pull ahead.  Those two miles were spent passing pacer after pacer as we cranked through a little over 8:10 minute miles.  The amazing thing is I still felt pretty darn good even being slightly less than a minute per mile faster than I had planned.

It was cool out and by the start of the race I already knew some bad news – the big running event I had planned for later that month had been canceled – major suckage.  Somehow in those first two or so miles I convinced myself there was no real reason to hold back – leverage the perfect weather and see what I could do.   The next shot was at the 7 mile mark and still feeling really good besides carrying the 8 and some change pace – to be specific, 8:10 is what the race clock had me at.  50 seconds per mile faster than planned but all in all feeling great.  With the extra kick comes extra heat generation causing me to get a little warm.  Linda was nice enough to toss me a cooler hat at this point (I was reaching up to remove my sunglasses and toss her my sweaty beanie).  We both had a chuckle thanks to the guy behind me that announced “Hey, he has peoples” 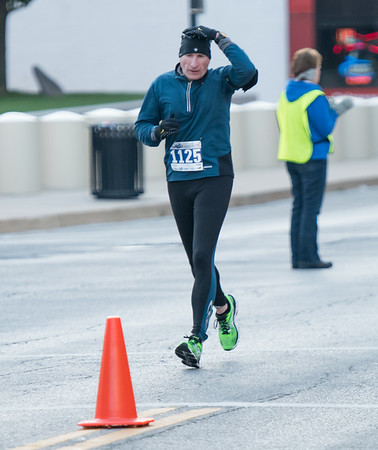 That change in hats helped dissipate the extra heat – especially nice since at that point in the race was the start of the big Main Street hill.  Normally I would be a little concerned about that, but we had spent a year training on hills worse than this and beyond that, this course is flaaaaat.  The hill on this course translated to my favorite part of the race.  The hill ended up being a non-event to the point I caught up with another marathon pacer.  His sign only had the marathon pace on it and I didn’t really want to force my brain to do math, so I can’t tell you for sure what that pace amount was.  All I know is I had passed another one meaning my pace must have been picking up.  By this time Ryan was nowhere to be seen.  I “liar” chuckled to myself all while happy he was having a great go at it.  At mile 8.5 my space got a little more crowded.  A young kid came up from behind and started pacing with me – as in step for step about a foot to my left.  I thought that was kinda odd being that there wasn’t anybody else around us.  After a few minutes he asked me if I was going for 1:46 – “Nah, I am just buying time for when I get tired at the end”.  “Oh, I’m shooting for 1:46” – and there he stayed right on my shoulder for the next 4 miles.  Not saying too much, just he and I pushing ourselves through the course at by now a very healthy pace.  To his credit, he was pushing me as much as I was pushing him – we were breathing pretty deliberately by then.  At the 11.5 mile mark he mentioned we were almost there and I provided equal words of encouragement.  We were .5 from the top of the hill to the end and I was feeling better than I ever had at this point in a half marathon – including the IVS race less than a month before which was my best to that point.

This year we had the extra excitement of finishing inside the Civic Center.  At the 12.5 mile mark the kid kicked it up a notch to the finish – oh to be young again.  At the just under 13 mark I made my way down the last downslope to the Civic Center floor.  This downhill gave me some free speed I used to close the distance on a guy that I had been trailing by some distance the entire race.  There was a final ramp up to the finish.  See that guy behind me in the shot below? 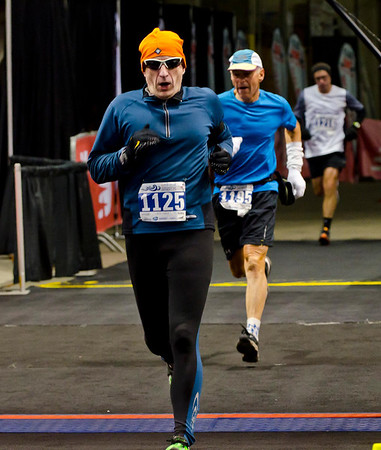 Well, he looks over at me at the start of the incline and all of sudden takes off in a sprint.  Ummm … rarely does anyone beat me up a hill climb and sorry, but nobody out sprints me at the end of any race.  Having the luxury of still feeling relatively good at this point I went into full burn mode and toasted him. 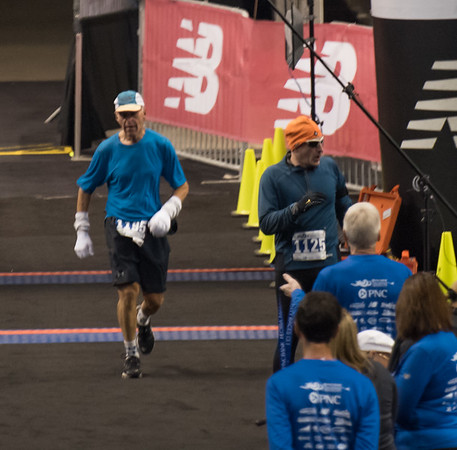 I should point that the finish line shot was NOT taken by Linda.  Why is that you ask..  well, she totally missed me coming into the center.  Before you start sending her hate mail, this is partly my fault.  I had told her not to even start looking for until 1:50 – that was even aggressive based on my planned pace.  I did not expect to come in at .. wait for it .. wait for it .. 1:44:09.  That my friends is my BEST half marathon time EVER.  Apparently she was totally shocked when the announcer called my name at the finish. 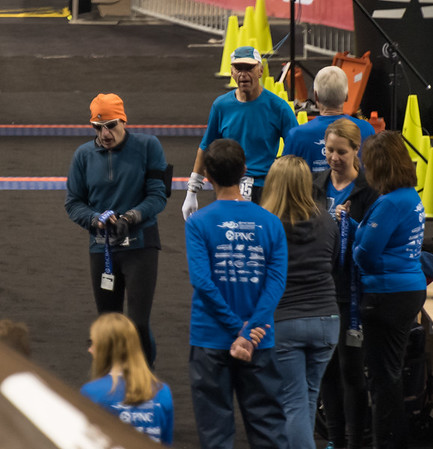 I had gone out strong and carried that through to the end.  That 8:10 pace was improved to 7:57 over the second half of that race – getting stronger as the race goes on.  Sorry folks, we didn’t manage to get my traditional post race ambulance shot.  This is partly due to the fact Linda could not get down to where the vehicle was (just past the finish line) and forgetting thanks to a mind blank after leaving nothing in the tank with the finish burst. 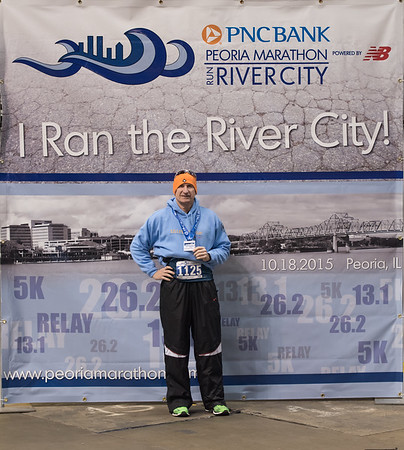 This was a well earned medal.  Some thanks go to Ryan for being the rabbit in the first half, some more thanks to the little rabbit companion in the second half and a lot of thanks to a huge contributor… 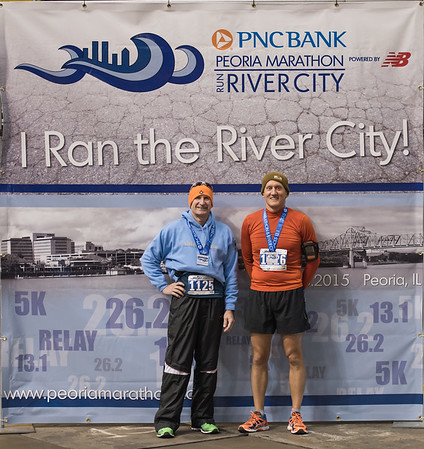 the 1100 miles I had logged on training runs up to that point – that’s right,  I’ve logged a crap load of miles this year to help prepare for a future possibility.  Every one of those miles helped form a very solid base that is paying dividends in the late season races.  The New Year’s goal was to have 1200 by the end of the year.  Let’s just say that goal is in the bag!

Some quick screen shots of the race stats.  If you look up 5 slots you will see the 15 year old kid that paced with me for the second half – I like to say we mutually benefited – he took second in his age group. 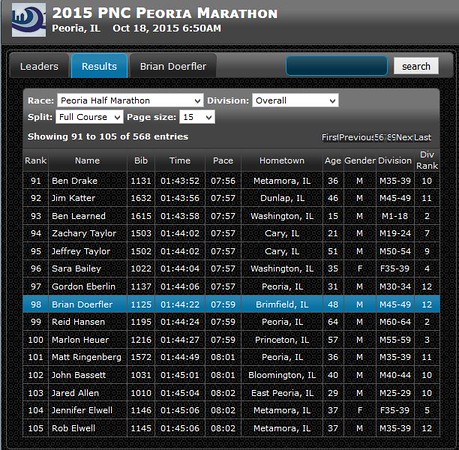 And the detail stats – that 7:57 really needs to be in bold with flash tags around it.  I don’t see myself getting must faster than that.  Unfortunately, I’m in a bad spot in my age group being towards the end of the range – In a couple of years those tables should turn.

That’s all folks.  Congrats to Ryan who had an amazing race – can’t remember his exact time but know he was about 2 minutes or so ahead of me – blistering time.  The good race at IVS, the PR at this race and competing the 20 mile goal yesterday is putting an extra level of satisfaction in this year’s running accomplishments.