It’s times like these I truly appreciate it when I get ambitious early in the month and crank out most of the quota before … well … today.  Par for course, I’ve been busy this month with some projects, training and even birding with my brother.  The good news is Project Auuurrnooold is coming along nicely.  The drop ceiling is going in much easier now that I’ve had one room to learn on.  Without a doubt, a third hand is clearly the next evolution stop.  To cap off this month we have the sweep in non-birding posts.  Thanks to Ron getting sidetracked on insects I have a little extra time before upping the bird list.  Besides, you want to hear about this year’s UB contest results don’tcha!?!

Sure you do.  Linda’s year of being the UB had come to a close.  From an assessment perspective she definitely gets kudos for driving me to birding locations both intra and inter state and even managed to get me some cool +1’s to add to the Bird List.  She did such a good job that I’ll even overlook a little incident in the Georgia Swamps.  There will be more on that trip in the future but as a teaser – Linda ..err, the 2014/2015 UB abandoned me out in the field.  Rather than stay with me and keep an eye on an alligator that was sizing me up for lunch, she ran.  She literally left me there as Gate Bait.  The UB guidelines are still being painstakingly reviewed, but I am pretty sure that might qualify as a violation resulting in defaulting another year of UB!

Fortunately, we do not need to wait around for the results of that review because this year’s contests came out favorable to yours truly.  This year we added a new venue to the competition – the Princeville IL. Fine Art Fair focused on artist in the area.  Each of us submitted entries into that event (my Cardinal and I think Linda entered a couple of her Jubilee pictures).

That event netted me a first place and Linda a got a second, third and a fourth.  A Doerfler sweep and 1 major point for me in the UB Competition.

Hit the jump to see how the rest of the results came out!

Next up was the HOI Fair.  Every year we have a debate whether it is even worth putting entries in that competition.  There are definitely some trends that are starting to question the integrity of that event.  Since we really only enter it for our personal competition, we keep agreeing to put our entries in – although it is getting harder and harder every year.

The good news is I took two Honorable Mentions earning me huge UB Competition points.  The bad news is, once again, we had issues with the judging.  My Cardinal has been well received in other events but got totally blanked at HOI.  That’s not a big deal, but I have to admit Linda got totally screwed.  She has some extremely nice waterfall pictures which I would put up against anyone on any given day.  Again, I can deal with it being outshined by a picture in another category but the judges instead selected a completely inferior waterfall picture instead – it wasn’t even in focus which I contend is criteria number one for being selected at all.  It was so bad I had to go back to it like three times in a desperate attempt to figure out what qualities it had against Linda’s products or even most of the other entries that got blanked.  Ridiculous.  Since I’m always honest with my readers, I also have to confess that the Flicker that earned the HM isn’t that great.  I even hesitated about entering it.  It has good lighting, but on the list of favorites it is a ways down the list.  The fact it got an HM is definitely surprising, but the other HM is one of my favorites so glad to get some confirmation on that.

Next up was the Knox County Fair.  They changed the rules this year having only one category for framed entries of any subject.   Mano O’ Mano across the board.  They then restricted all the other standard categories to cardboard backed 8×10 pictures.  Their explanation is they wanted to reduce the cost of entry.  Again, their fair and they can set the rules however they want – the downside of the 8×10 is it can mask a lot of soft images which decreases the advantage of sharp pictures – an element we always strive to achieve.

The interesting thing about this year’s show is it put Linda and I head to head in the framed category.  Although I was clearly in the UB lead, this could definitely change things quickly.  A win for Linda here would require some creative assessments to truly come out on top.  With a bit of apprehension we checked out the results.  It is my pleasure to inform you that the head to head competition, the best against the best and the decider of this year’s UB Contest winner is ME (crowd goes wild, ticker tape streamers, snap pops falling everywhere).  I not only took first place, I took Best in Show with the Cardinal  .. you know, the one that was totally blanked at HOI.  That was a huge sigh of relief.  The intriguing part is my other birds .. yes, my specialty.. were totally blanked.  My Raccoon did manage to pull a third.  Meanwhile Linda mopped up in the other categories.  A second to my Cardinal was her waterfall (the same one that was blanked in HOI).  Another second for another waterfall, a first for her Jubilee shot and a bunch of thirds.  Impressive, but hard to overcome the head to head competition.   You can see them in the shot above.

Here were my other entries in the HOI Fair – oh, and they managed to ruin some of our pictures thanks to a leaky roof.   There were no apologies for that either.

Here were my other Knox entries.  I’ll talk about that duck in the picture above and below in just a bit.

And just to round out the shots, here are Linda’s other entries to the HOI fair.  I said it once, I said it twice .. her two waterfalls shots were totally screwed.  Oh, and I need to APOLOGIZE to Linda for the shot below.  I accidentally put the upper right one on its side.  I didn’t notice it until I had put the camera away.  Honestly, it was a mistake (admittedly I did chuckle when I noticed it). 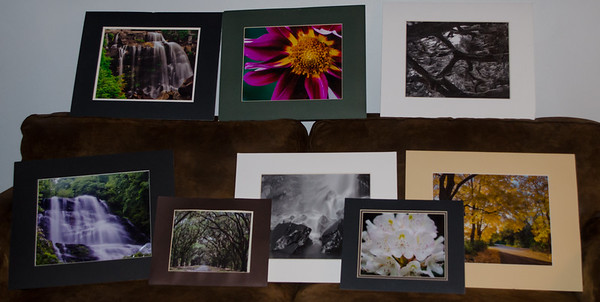 There was two other elements to the HOI Fair worth mentioning that occurred when I picked up the pictures.  As I was picking up our entries the guy who helps coordinate the show asked me who I was.  When I told him he responded that he had something for me and walked over and pulled out two small scraps of paper from a box and handed them to me.  Apparently these were names and numbers of individuals who had inquired about purchasing my pictures.  Wow, that was pretty cool.  Now for the hilarious part – they wanted to buy my Cardinal and the duck mentioned above – both of which was blanked.  The second interesting element came from a major screw up.  I had my hands full with the ribbons and all our entries along with the two tiny scraps of paper.  A huge gust of wind came up just as I was putting the images in the car – this grabbed all the backed pictures like a boat sail and nearly knocked me down.  While I wrestling the entries into the car the two tiny scraps of paper flew off into the wind.  I was able to capture one of them but ended up looking for at least 30 minutes to find the other – I looked everywhere and along every fence that was in the area.  Nothing – even went back to the picture area to see if I really had taken it and not just left it on a table – nope.  It was gone.  Major suckage.  As a last ditch effort I walked up to the guy who gave them to me and gave him our business card in case that person reached out to him again.  As I turned to go he says “Hey, wait, you are not getting away that easy – your card here says you’re a photographer”.  Ummm yeah..(thinking to myself that is why I enter photography contests).  I gave a sheepish response in agreement wondering if I had disqualified myself in some way.  He then says “We need judges, do you want to be a judge?”  “No, no, I’m not qualified to be a judge” and kinda of laughed it off.  “But your card says you are a professional photographer”.  “I am, but I do not feel I’m truly qualified to be a judge.”  At one point it crossed my mind to take him up on it just to get an inside perspective of the judging, but then thought better of it – plus that would disqualify me from entering which would screw up our friendly competition.  I told this story to Linda and consider it confirmation of our growing concerns.

All in all, another good year for both of us and especially good for me since Linda will retain the UB title for another year!

7 thoughts on “Another UB Competition in the Books”